This past weekend, my whole family got together in Central Pennsylvania. My brother, his wife and two kids came down from Vermont, and my sister and her husband came in from Bellefonte. Together with my Dad and Mom, we took a family outing to a favorite location, Knoebel's Amusement Resort. 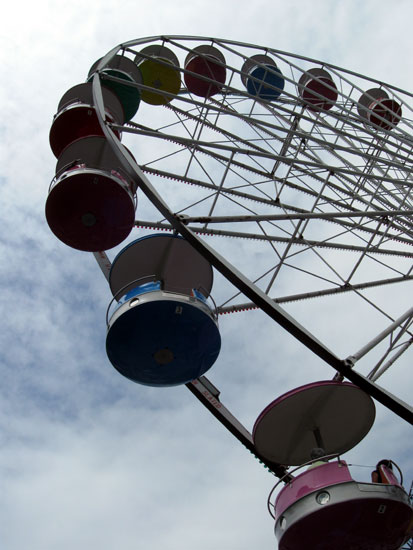 There was a much longer wait to get into the park than I'd ever seen, with traffic backed up for several miles. That, unfortunately, was a premonition of the day.

We began in Kiddyland, as my niece and nephew rode the kiddie rides. I figured that Kung Fu Panda would be hungry and tried to feed him in a shady area, using a privacy cover-up, but he was too tired to eat, still drowsy from the car ride. 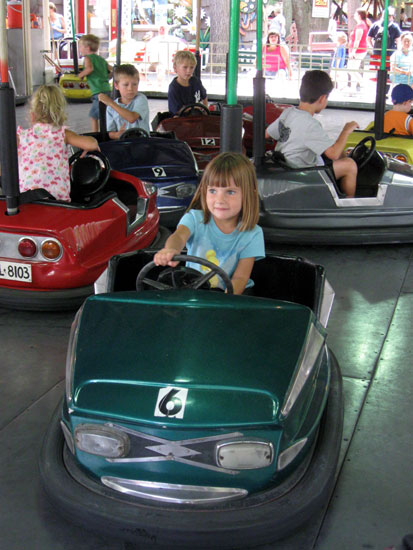 My niece rides the bumper cars.

It seemed packed in Kiddyland, but it didn't occur to me that it was unusual, because the rides are closer together there, and it often feels more dense. Kung Fu Panda, of course, was way too young for any rides and simply lounged in his stroller. 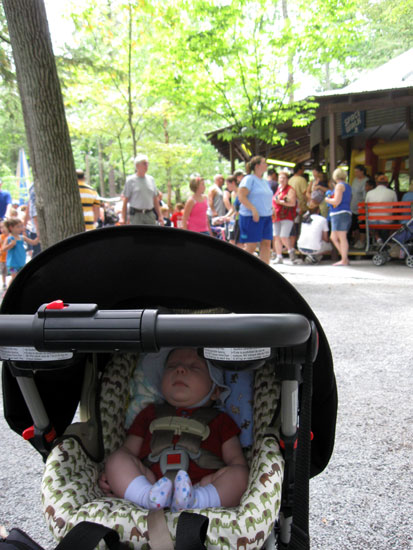 KFP saw most of Knoebel's through his eyelids.

It was difficult for us all to stay together, so my sister, her husband, The Gryphon and I decided to split off and walk towards the adult rides. On the way, we got a little sidetracked, buying fudge-covered apples and then seeking out the "Baby Aid Station" to feed and change Kung Fu Panda. This is a little building with a changing area, a chair, and a crock pot full of water to warm bottles in.

Meanwhile, my sister and her husband were going to ride a ride and connect up with us afterward. They came back much sooner than we'd expected, telling us that the lines were ridiculously long, longer than we'd ever seen them. The Gryphon told us why: while asking about baby changing stations at the main park office, he learned that at least two very large corporate pic-nics were taking place in the park that day, in addition to a couple family reunions and other gatherings.

The lines were so long for any of the rides that they spilled out far past the line control barriers, so that the line for the Phoenix, for example, stuck out into the fairway, blocking traffic.

With the prospect of an hour wait for any ride, we decided it simply wasn't worth it. Instead, we sought out the park's two carillons for me to get more video footage of them (the first time I did so, it got a lot of hits from music box enthusiasts on YouTube). We also tried out some of the park's food offerings. Namely, my sister's husband got a banana split that was so big we had to share it. 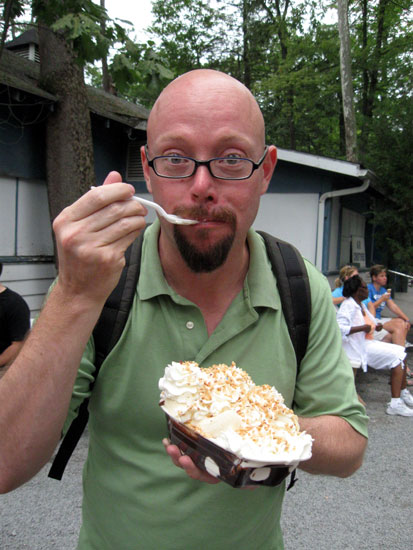 After playing phone tag for a little while, we managed to reconnect with my brother and his family, along with Mom and Dad. They had just put the kids on the Merry-Go-Round in Kiddyland. As we talked about what to do afterward, my nephew befriended another boy, who had the same idea of climbing up on a cut log. 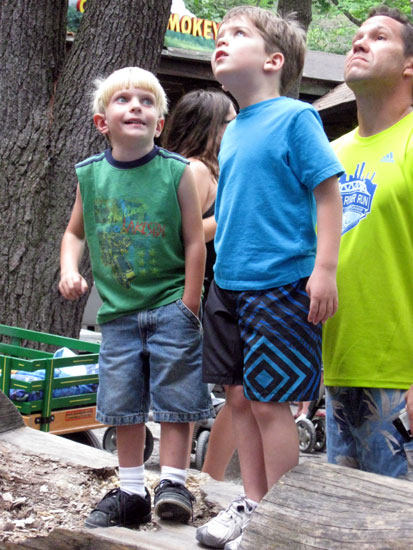 My nephew makes a friend in Kiddyland.

By this point, it was actually getting close to dinner time, so my brother and his family headed back to Dad's house. The kids were starting to get tired, anyway. The rest of us didn't stay much longer. Everyone but The Gryphon (who stayed below with Kung Fu Panda) rode the Scenic Skyride, which is basically a ski lift that takes you up into a nearby mountain for a view of the valley. 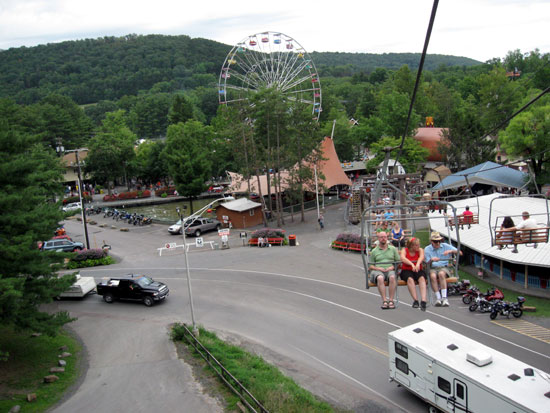 My sister and her husband, along with Dad, on the ski lift ride.

Dad, my sister and her husband headed back to his place, while the Gryphon and I got something to eat, along with Mom. We ate at The Oasis, which has cafeteria-style food. I had the barbecued chicken with mashed potatoes and mixed vegetables. It was basic food but hit the spot.

As we made our way back to the car, I realized that this was the first time I'd ever come to Knoebel's where I only rode one ride. Hopefully, the next time we go, it will be less crowded.

Moral:
Don't try to visit an amusement park when there are big company pic-nics going on.