Since babies grow so fast, my brother recommends photographing Kung Fu Panda in any outfits I particularly like before he outgrows them. Already I've almost missed the window for a onesie a friend gave us, done in the style of The Incredibles with the superhero name, "Captain Adorable." I'll share those pics as well as some updates.

You can see that the onesie no longer buttons over his diaper cover. I've ordered some garment extenders which should help. 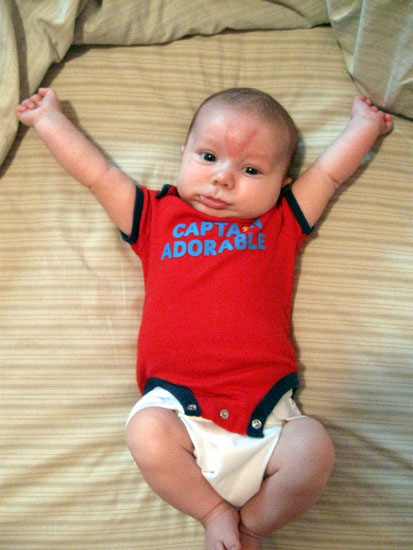 Kung Fu Panda gets in a good morning stretch. 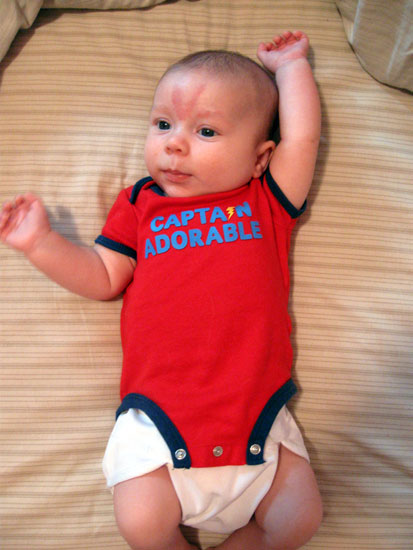 Kung Fu Panda has a question. 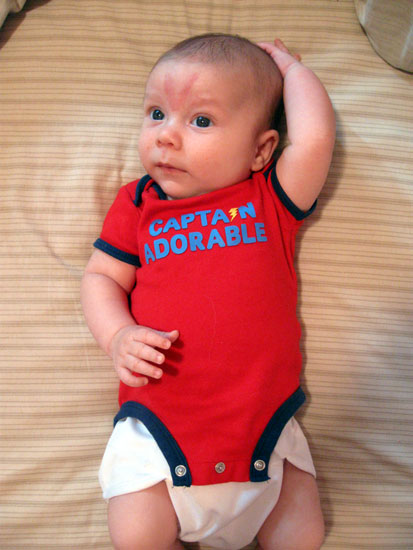 When I asked him what his question was, he looked confused. 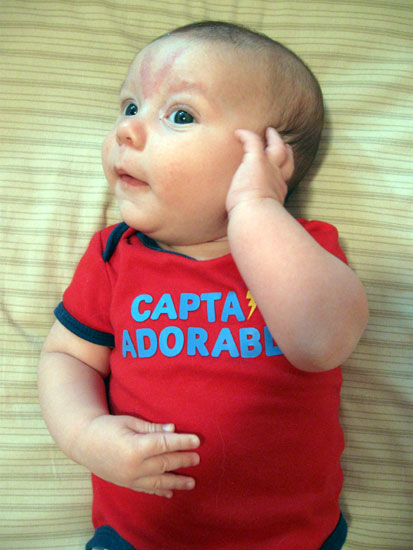 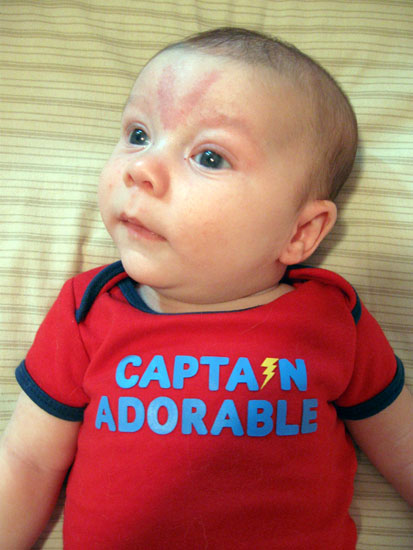 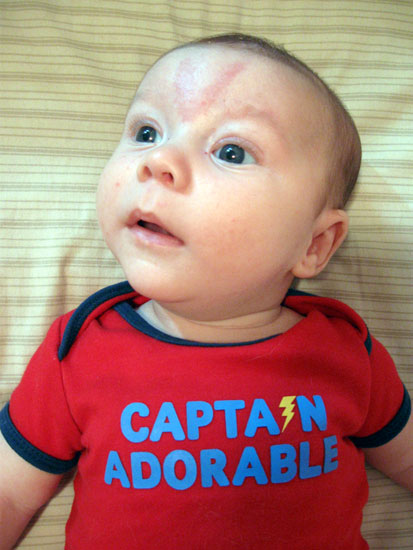 Things change so quickly with a growing baby, and I begin to accept the changes as if they had always been. But the Kung Fu Panda I hold in my lap today is very different from the newborn who dozed on my chest as I typed those first couple of weeks.

For one thing, he gets bored with being in the same position for too long, provided that he's awake. If I want to work on something, I find that he may be placated by sitting on my lap, facing outward so that he can gaze around the room. While he can't hold his neck up as well as an adult, he has remarkable neck control, something he's been gradually gaining.

He's also been actively working on his leg muscles. This began a couple weeks ago, as he would "climb" me when I burped him, pushing up with his legs against my lap. He enjoys being held with his feet pressed against the ground, as he "stands" with assistance. His face lights up, and we do "baby calisthenics," with him pushing up and me helping his body to rise to an erect position.

Lately, I've noticed him trying to sit up, and so today, we did "baby situps," with me placing my hands behind his head and helping him to come to a sitting position, propped by my hands, of course.

The best development, by far, is the strides he's made in social behavior. Not only does he smile now, but he now smiles and laughs in response to voices or facial expressions or touch. My sister discovered, while helping us at Otakon three weeks ago, that he laughed when she ran fingers down his back or dangled her hair in his face. Each afternoon, after I finish my afternoon transcription assignment, he has a large window of alert time when he smiles and laughs easily. During this time, I move upstairs to the well-lit bedroom, where we can play WXPN and I can read to him or put him on his stomach for the much-despised but doctor-recommended "tummy time." I imagine he'll like it better when his arms and chest are as strong as his legs and he can crawl instead of just pushing fruitlessly with his legs with his head half-raised above the blanket.

Una has been making friends with him, now that he notices her. Today, while I had him standing, she came up to look him in the face. He smiled a wide grin, and she licked him gently, eliciting a laugh. I made her back off afterwards, just so she knows she still needs to restrain her love impulses.

Kung Fu Panda is an active little guy, just like he was in the womb. One of his favorite games is airplane, where I sit or lie down and raise him over my head, making him "fly" back and forth. He gurgles and laughs, his eyes wide with delight and wonder.

He is still more interested in faces than toys, except when a toy has a face, in which case he responds to it. He loves the squeaky giraffe we got him a couple weeks ago at Dad's place but shows no interest in the rattle or teething ring. The other day, while I was taking a shower, he actually looked at the bear mobile above his crib when I pulled it out for him. And while before he showed no interest in the dangling turtles and frog on his bouncer, a week or so ago, I pushed the turtle and said, "Turtle!" and he followed it with delight.

The initial "eh" sounds he made starting in his second or third week have expanded into gurgling or babbling sounds. We have "conversations" where I talk to him and, in the appropriate space, he gurgles a response. Once, over the baby monitor, I heard him utter a cheerful, "Hi!" But since no one was in the room at the time (except for, perhaps, his guardian angel, the one who apparently flies above him and makes him giggle when he is not looking at us), I guess it was just coincidence.

Just within the last week, he figured out how to grasp things, and while he has yet to grab the toys we bought for him at Dad's place, he grabs the corners of his receiving blanket and waves them around.

One of the biggest developments is the fact that he's sleeping longer at night. Rather than waking up every hour to an hour and a half, he will sleep for three or four hours at a time, which seems like pure luxury.

I'm going to have to remember to track all these small milestones, which add up to such big changes.

Moral:
Every day is an opportunity for learning.