A Group of Three

On Sunday we drove to the Philadelphia Museum of Art to meet up with some other new parents for a walking group I found out about online. The group was supposed to meet at the Rocky statue in front of the museum, but as we soon learned, we would be the only ones showing up.

This was the first time we'd been able to attend the regular walks, since we'd found out about it just before Otakon, when we were busy. But I had RSVP'd, so the group leader should have known we would be there. Three other people had also said they would be coming.

It's been a long time since we've been to the art museum, and we weren't aware of some changes. There is now a parking garage immediately behind the museum, and the Rocky statue has been returned to the property. It was reinstalled in 2006, on the 30th anniversary of the original movie, but instead of residing at the top of the steps, it's now in a little grove to the right of the famous museum steps.

An enterprising entrepreneur was selling soft pretzels and Rocky T-shirts from the barrier surrounding the statue. There were several people gathered around, all of whom seemed to be tourists. Only one couple was pushing a baby carriage, and they made a beeline for the statue to have their picture taken by a friend.

We hung out for 15 minutes, and neither the organizer nor anyone else arrived who appeared to be interested in the walk. Since we were there anyway, we decided to walk around a little bit before leaving.

Only a few minutes into the walk, Kung Fu Panda needed a diaper change. We did one in the grass, using the fold-out pad on his diaper bag. He enjoyed looking around at the trees and a nearby rock wall. In fact, he enjoyed it so much he refused to go back in the stroller, crying bitterly every time we tried.

So we walked around the back garden area behind the museum, showing KFP some bushes and flowers, which he found fascinating. We even walked over to the riverfront and showed him a view of the river from a gazebo behind the Waterworks restaurant. If it hadn't been so hot, even though it was early evening, we might have done some more walking. 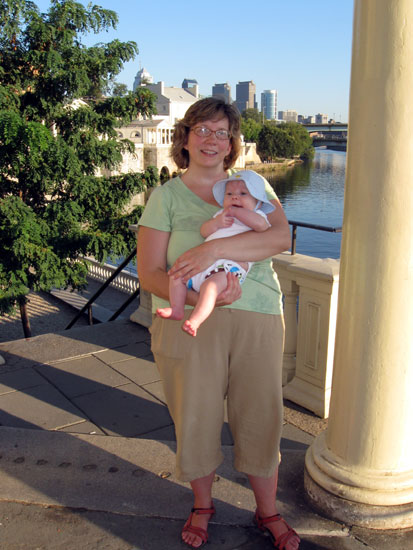 My Kung Fu Panda and me at a gazebo on the water's edge behind the Philadelphia Museum of Art. 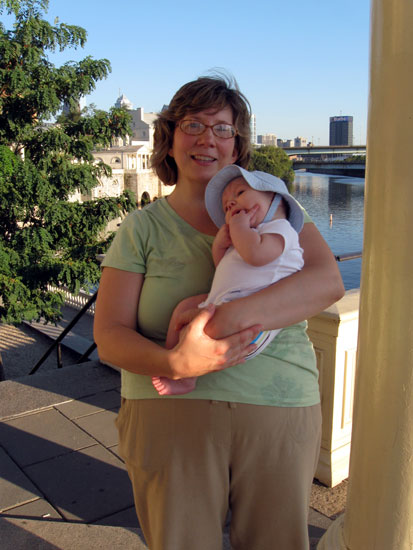 Me and KFP at the gazebo, framed a bit closer. 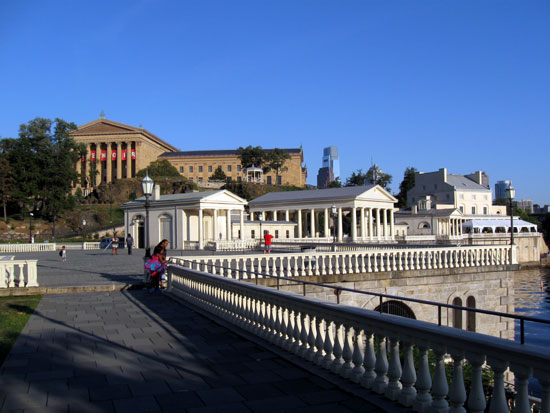 A view of the Art Museum that also includes the Waterworks restaurant,
which are the white buildings in the foreground.

We got dinner at Zorba's, eating at a table on the sidewalk. We had the Zeus Platter, which was like a sampler built for two. It was pretty good, but I'm glad we got a salad with it, because it didn't include any vegetables. Still, The Gryphon said it was the best fried calamari he's ever had. KFP, of course, had a bottle of formula.

In a strange sort of postscript, I checked my e-mail when we got home, thinking that the walk might have been canceled and I missed the notification. While there was no notification, the walk was also no longer listed on the site. And the very next day, I received a message from the organizer saying that, regrettably, he and his wife would no longer be able to run the walking group. So there's one opportunity ended before it truly began.

No matter, though: The Gryphon and I had a pleasant experience and have vowed that we will figure out other outings to make with KFP, so that we can both get exercise and expose him to new experiences. We hope to make it a regular practice from now on.