The Magic of Three

Time flies, as they say, and this past weekend, The Gryphon and I celebrated our third wedding anniversary. This year also marks our seventh year as a couple.

We lined up a babysitter in the form of a friend I'll call the Improv Lawyer, because I met her through taking improv classes, and she's also a lawyer. She had come by on Wednesday to meet Kung Fu Panda and get familiar with our house.

Since evening can be a difficult time for KFP, who tends to get fussy, we decided to celebrate earlier in the day. First, we went to the Cleopatra exhibit at the Franklin Institute, and then we had dinner at a great little Italian restaurant on Sansom Street, Melograno.

The exhibit was much better than the last special exhibit we'd visited at the Franklin, the Star Wars exhibit. Unlike the Star Wars exhibit, which essentially consisted of a number of items in plastic cases, crammed into a few rooms, the Cleopatra exhibit spread over several rooms with a natural path to follow. It also helped that the museum docents only allowed a certain number of people to enter at a time, which kept the exhibit from becoming overcrowded.

Throughout the exhibit, backdrops, music and lighting helped create the feel of being in an underwater world. Why? Because the artifacts on display had been recovered from recent archeological expeditions led by Zahi Hawass and Franck Goddio, many of them from the depths of the Bay of Aboukir near Alexandria.

Certainly, the scientists found some remarkable finds, including these colossal, 16-foot-tall sculptures of a Ptolemaic king and queen from the Temple of Amon at Heracleion. They are in amazingly good condition, considering how long they lay beneath the water. 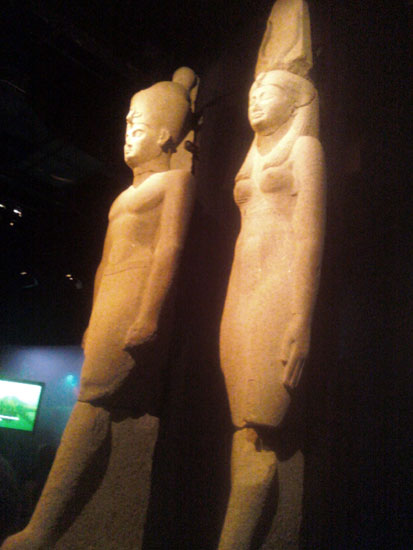 Colossi from the Temple of Amon

I didn't take as many photos of this exhibit as I had of the Star Wars exhibit, since we had been told photography was not allowed. But when one of the security guards saw me pointing out all the amazing detail on the colossi, he told me that if I had my cell-phone camera with me, I could take a picture. He cautioned me I just had to be certain not to use a flash. Considering the darkness of the exhibit, the few pictures I took turned out rather well. 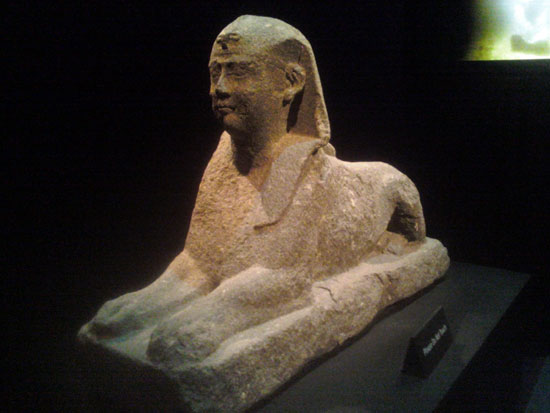 This sphinx was from the private temple at Cleopatra's palace.
Like most of the artifacts displayed in the exhibit, it was recovered from the sea. 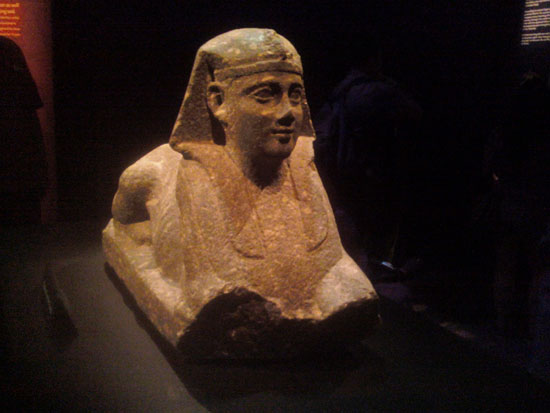 This sphinx has the face of Auletes the Flute Player,
which was the nickname of Cleopatra's father.
This was from the private temple at her palace. 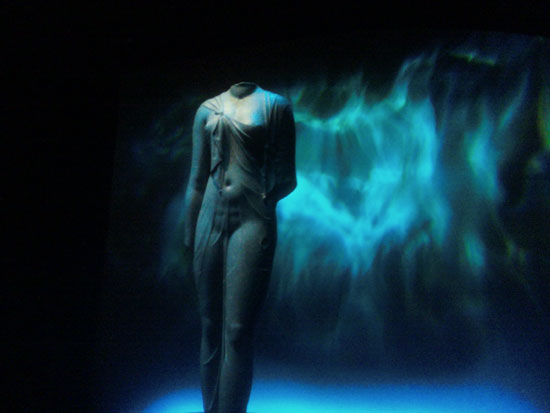 Few images of Cleopatra survive, but this one of a Ptolemaic queen
is in the style of those that would have been made.

If there was any fault with the exhibit, it was that there was sometimes too much information to take in at once. We had an audio tour, but unlike the ones that accompany the art museum special exhibits, this was essentially a narrative, told by Cleopatra, about her life. While it did help tie the artifacts to her life, by showing what relationship this objects might have had to the life of people in Cleopatra's time, it was often distracting, listening to her narrative while looking at object in cases which had unrelated information cards on them. Although the exhibit wasn't ridiculously crowded, I felt self-conscious about standing too long in one spot, so I tried to listen to the narrative while reading the information on the cases.

Still, we enjoyed the exhibit, which took us about two hours to view. Afterward, we checked out one of the permanent collections, Sir Isaac's Loft, which houses a variety of interactive exhibits demonstrating principles of physics.

Afterward, we walked back to our car, at a parking lot several blocks away, and drove to Melograno. We arrived a little before they opened, meaning that we got seated right away. This is a good way to go with Melograno, which doesn't take reservations on Saturdays.

The restaurant has a simple, rustic feel, with distressed paint on the wainscotting and tables. The food, likewise, is simple but delicious. We began by splitting an appetizer, Mozzarella in Carrozza (Sliced bread filled with Mozzarella cheese deep fried garnished with anchovy butter sauce & tomato onion confettura), along with a spring green salad. The Mozzarella in Carrozza was terrific: with just enough crunch to add texture to a gooey treat.

For my entree, I had the Pappardelle Tartufate (Wild mushroom sauce infused with truffle oil, sprinkled with Tuscan pecorino cheese & walnuts), and I loved the earthy mushroom taste of the sauce, which highlighted the homemade pasta. The Gryphon had the Pappardelle Al Ragu di Cinghiale (Braised wild boar bolognese made with fresh tomatoes & rosemary finished with Parmigiano).

We split a dessert of a ricotta cake with strawberry sauce, along with coffee. It was a great way to celebrate our first night out together since Kung Fu Panda was born.

On the way home, we bought a bottle of wine and had a glass of it while watching, appropriately enough, Date Night, which I thought was one of the best screwball comedies since the '80s.

KFP had some difficulty getting to sleep that night, possibly because he hadn't had enough mommy time during the day. Or maybe he just wanted to help us celebrate!

Moral:
A little time alone can be magical.