Amazingly, for the second time in about three weeks, The Gryphon and I got to go out together, albeit this time for a work-related function. The Gryphon's workplace was holding a special event for clients at a place called North Bowl in the Northern Liberties neighborhood of Philly.

I got there about an hour and a half after it had started, because I had to talk to our babysitter (a fellow Otakon Guest Relations staffer) and get her oriented to our house and to KFP's needs. Ironically, I arrived before The Gryphon, who got a ride with a fellow Web developer from their firm. They'd had to stay late to finish an important project: the company's launch of their revised site. 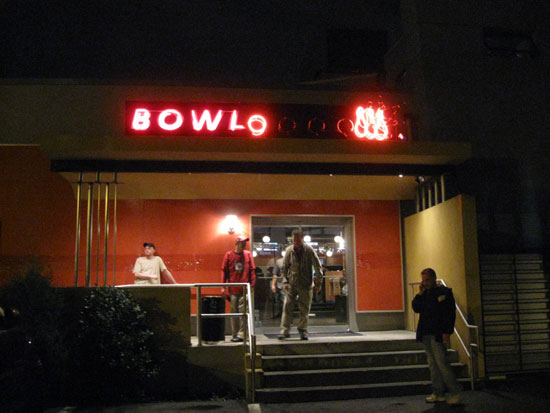 North Bowl has a very retro vibe,
first evidenced by their moving neon sign out front,
where a ball hits three pins.

When The Gryphon arrived, we went upstairs together for the private event. We ran into his boss at the buffet table, which had sliders, tater tots, chicken quesadillas, and grilled vegetables. We ate at the bar, where drinks were on the house. I was able to have one, a rare luxury, since The Gryphon had offered to drive us home. 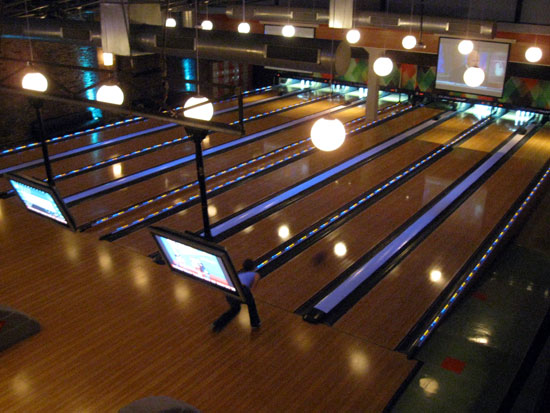 The main floor is visible from the balcony area,
where our private event was held. There are several lanes,
and despite the fact that only one bowler
is in this picture, they were all in use.

Then we headed over to the lanes at the far end of the room and bowled a couple of games. The Gryphon beat me both times, no surprise, since he used to bowl on a somewhat regular basis when he was younger. I joked that he'd probably had a letter from being on the bowling team or something, and he assured me that, like me, his only letter had come from band. 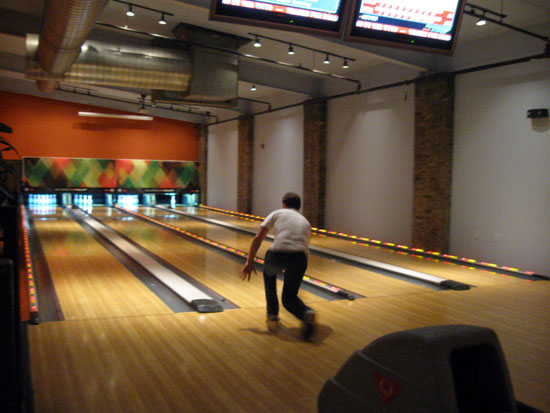 One of The Gryphon's co-workers bowls at the lanes
set aside for the event, upstairs.

We both felt the place was a perfect match for his company, whose aesthetic is modern with an awareness of classic design. It was also a great match for the fun and playfulness that is often characteristic of their work, such as this ad for the Cleopatra exhibit at the Franklin Institute. 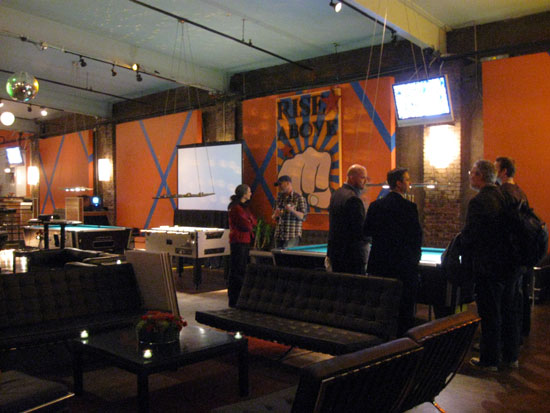 The event was upstairs in a room that contained
both a lounge, a bar, and several lanes.

We got home by about 10:30, and learned that Kung Fu Panda had been really calm and happy, even though he wasn't yet ready to sleep. I'd say he was waiting up for us, except that he does this every night lately. No matter what we do, he goes to bed about midnight and sleeps until morning, when I wake him to change his diaper and feed him. Who knows? Maybe some day we can take him bowling.