Because of the ultrasound that led to a depressing prognosis, Una also has an exposed, nude belly just as the weather is turning colder.

I went to Petco yesterday and bought her a fleece dog coat, pink with polka dots, to keep her warm when we go outside. Then, because I thought it might lift her spirits, I bundled up Kung Fu Panda in his stroller, and we took her for a walk. 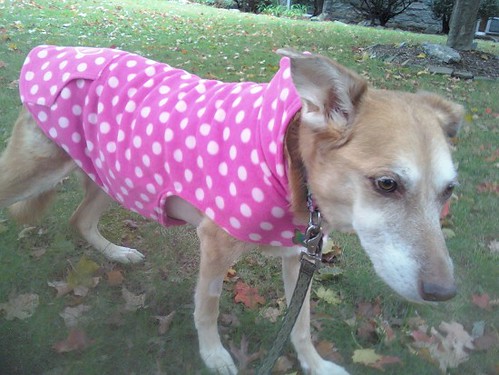 Una in the coat I got her to protect against the cold.

Normally, Una gets very excited when I put clothing on her, because it means she gets extra attention. This time, she seemed subdued; perhaps a sign of her sickness, or perhaps because she remembers wearing a fleece dog coat when she was a pup.

As I opened the porch door onto a gray but still bright day, Una smiled. By the time I grabbed my camera, the grin had disappeared. And though I couldn't capture it on our walk, I know she enjoyed the slow jaunt through the neighborhood.

I let Una lead the way, ready to turn back at the first sign of distress. Her steps were slow and deliberate, but she refused to turn back at the corner where I first tried to lead her home, and we followed her around another block as she sampled the scents on a tuft of grass, a fence post, a pile of leaves. Born in late October, she's always loved romping through dry leaves (and peeing in leaf piles). 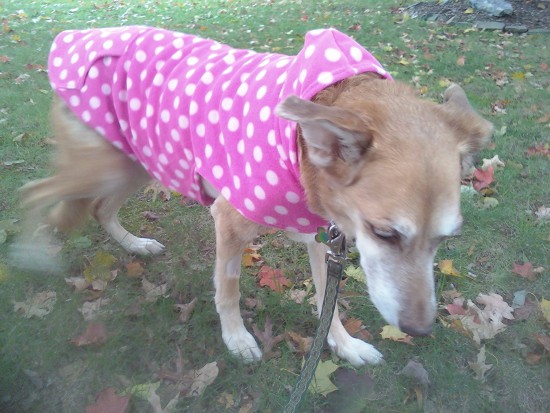 The coat covered her bald spot perfectly, which helped with another concern, as well. Friendly strangers admired my cute dog, rather than pausing to ask disturbing questions about her health. More importantly, they held out their hands and pet her, telling her she was a good dog. People may sympathize with sick dogs, but they do not pet them. Una has always loved making new friends.

Perhaps more importantly, she took treat after treat from me during our walk. In all, I gave her almost an entire sandwich bag of training treats. This was hopeful, since it's been a struggle to get her to eat anything for more than a week.

Unfortunately, when I was following up with the vet last night, she told me that I should let Una rest. "You don't want her to overexert herself," she told me. "We don't want another rupture."

I'd been so convinced that walking her was the right thing; she'd seemed so happy. Now, I'm not sure. She's had a periodic bloody nose since last night, and I fear I did something wrong, something that will inadvertently shorten her days.

Still, I'm trying to bring her enjoyment, where possible. This morning, for breakfast, I gave her a bowl full of cat food. She jumped off the couch and ran over to the forbidden treat with more enthusiasm than I've seen in weeks. 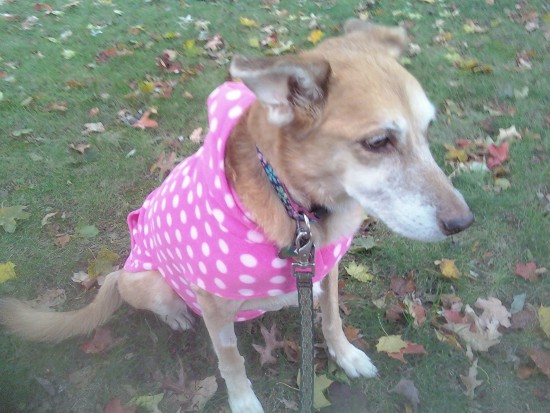 Una takes a good look at the world around her.

Moral:
Dogs don't keep bucket lists, but if they did, "eat cat food" would probably be on there.