The Story in Her Eyes

You will know when it's time, my friends kept telling me over the last several days, ever since I got the unfortunate news about my dog, Una's, end-stage liver and kidney cancer. Last night, she came upstairs and hung out on the bed in the master bedroom while I worked on transcriptions. Periodically, I lay down beside her and petted her. Remembering a conversation I'd had with a friend over Facebook chat, I whispered in her ear that if the pain got to be too much, to please let me know.

This morning, my husband woke me and told me that she was breathing with great difficulty and drooling uncontrollably. I thought about how my mom had told me she knew it was time to end it when her dog, Sunnie, couldn't breathe anymore.

I'd known it was a bad sign that, for the last two nights, Una had chosen to sleep downstairs rather than sleeping at the foot of our bed, or better yet, curled by my side. She'd been having trouble with steps, one of several troubling signs, the worst of which was her complete lack of appetite, even for things she'd long considered treats. I hadn't really expected her to get the four weeks a specialist had projected. Maybe another week, I'd thought, though I didn't dare articulate it out loud.

Both my maternal grandparents stopped eating weeks before they died. Pop-Pop was feeding Ensure to Nana the morning she died. She spit it out and breathed her last.

For three weeks before he passed behind the veil, Pop-Pop, too, declined to eat. He saw dead relatives around him, and gypsies coming in the window. Hospitalized with an IV for nutrients, he briefly regained lucidity long enough to insist that he was coming home with me. "Get my hat," he'd said, reliving an incident in his youth where, after breaking his nose (he says in a fight; my great aunt said a horse stepped on him), he'd pulled out his IV, put on his hat and left. A week later, moved to a nursing home, he died the morning I was going to visit. I went into his room anyway and read him "Persimmons" by Gary Snyder, where the book had fallen open. Then I poured the orange juice I'd brought him around a young birch.

I called Una's tried and true pet sitter, who'd given her such great care on days we couldn't. She had wanted to say goodbye to her, and I told her that she'd have to come now. A dog lover who had taken other pets to the veterinarian to help hasten them out of this suffering world, she offered to drive us there. Lately, it's been hard to get Una into our two-door car, and the pet sitter has a station wagon where her dogs routinely ride in the back. So I called the vet and made the appointment: for 9:40 a.m.

In the hour we had left, I sat next to Una on the carpet. Both Kung Fu Panda and our kitty, Luke, came by to give her some loving. KFP was babbling a happy storm, and I found myself wondering if Una could tell the difference between his sounds and our human language. I've always wondered just how much she understood.

"Do you remember," I asked her, "that time we went to the all-night harvest party at Chuck's farm? With the bonfire and the music? You and your sister Emma were in heat, so we had to keep you in the back of the truck to keep you away from all the male dogs. Then, when my sister and I crawled in the back to sleep, you and Emma took turns licking our faces all night long."

Una looked intensely at me, and I told her I understood. "I know you've been sticking around to help me watch the baby," I told her. It was true. For the first six weeks, she'd followed us into the nursery for every diaper change. Lately, four months old, when he cried, if he was within reach, she'd licked his face. Surprisingly, it sometimes helped. Our nanny dog.

Una kisses KFP in a video shot five days ago.

"I've got it under control," I said. "You've been very helpful, but I know what I'm doing now. Look how happy he is." KFP babbled happily, holding out his hands towards her. "You don't need to stick around for him any more," I said.

For these last quality moments together, before we'd have to load her into the car and take her to a place she'd always hated, I tried to keep my voice light and cheerful. The same bubbly voice she'd heard from me when she was a puppy my brother called Bear. "I hear that Dog Heaven is a great place," I continued. "You can eat as much cat food as you want. And if you find deer poop, you can roll in it and no one minds." I thought about the time I took her with me on a blind date, meeting the guy and his dog at a favorite park. She'd smeared her face with deer poop and grinned deliriously while I told the guy, "Sorry, I have to take her home and wash her." It never would have worked out. His dog had been standoffish.

"Pulsar and Eddie will be there," I said. Pulsar, Una's mother, was my brother's dog and had, tragically, died while he was attending our wedding. Eddie, Una's brother, passed away earlier this year. "In fact, everyone you've ever loved will live together in one big house." Every holiday, Una had been reluctant to leave my dad's place, and we'd joked that we ought to all move in together to keep Una happy.

Luke brushed by Una. Ever since we'd brought him home several years ago, the two had been best friends. I had always joked that Luke was Una's pet, since she'd always loved cats but Luke was the only one that let her get near. "There are cats everywhere, and they all want to be sniffed."

When Una was younger, I thought it would be cute to teach her some tricks. I taught her to shake and then, because it was similar, I taught her to block. "Block," I'd tell her, while coming at her with a slow punch. She'd wrap her paw around my wrist and push it to the side. At the time, Dad had an old cranky cat named Harold who despised Una. He would try to start fights with her, but Una had always been taught to be gentle with cats: "Be nice." This time, though, he must have attacked her on her way to her water bowl. We heard a "mrrrowl" and a short, scolding bark, like Una was saying, "Bad kitty!"

I ran into the kitchen and saw her pinning Harold to the floor with her paw, having apparently successfully blocked his attack. Although I knew Harold had started it, I scolded her, but laughed to myself secretly. After that, I stopped reinforcing "block."

As luck would have it, the pet sitter was running late. By the time she arrived, I knew we'd be late to our appointment. That's OK, I thought, if there's one appointment to be late to, this is it.

She agreed as soon as she saw Una that the end was near. Her labored breathing made that clear, and I feared she might continue to suffer for hours, or even a day, if we did not do the right thing. I got out her pink fleece coat and put it on, then snapped the leash around her neck. She would not budge.

The Gryphon agreed to carry her to the pet sitter's car, so I went ahead with KFP. I had just snapped his car seat into the base when The Gryphon came out the door. "Come now," he said with urgency.

"What about the baby?"

We rushed past each other, and I ran into the living room. The pet sitter was stroking Una's back, in tears. "I think it's time. She's going," she said.

I petted Una's nose and told her, "You're such a good friend. I'm so glad I know you. You've taught me so much." I unsnapped the leash, and the pet sitter removed the collar. Her tongue protruded out the side, and she panted heavily. "You're a good dog," I told her. "A very good dog. You've always been my best friend."

And then, I too, burst into tears.

For some reason, it seems I'm always the one in the family who gets called to help deal with death. I've helped my mom put a dog, and then a cat, to sleep. I was there the day my grandfather died. I helped my mother dress my grandmother for her funeral. And always, always, it is the same. You can tell, the minute a spirit passes, that they are gone. And even as I'm sobbing, I feel something in the air, something that, if you could see it, would be shimmering. If you could hear it, it would tinkle, or perhaps bubble, or even giggle. It is a sort of ebullience, and it passes by, and then it is gone. She was gone. 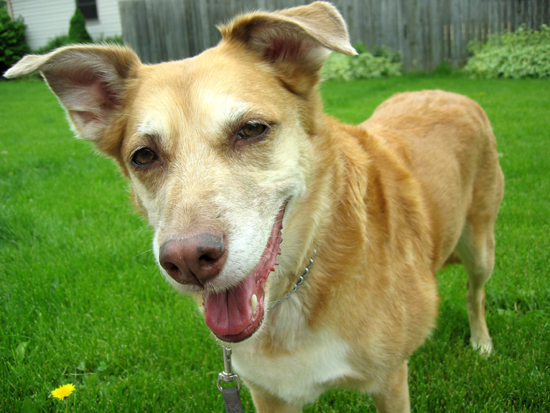 Una smiles on a bright day

Moral:
You know when you know, and that's all that I know.