We probably would have arrived earlier at the annual Halloween party hosted by The Martial Artist and his wife, The Book Lover, if not for the Great Tart Experiment. We had some apples sitting around the house, bought at the farmers' market, and I suggested a simple apple pie. My mom used to make them in about an hour flat, using pre-made pie crusts.

The Gryphon, always the food adventurer, looked up a recipe for apple tarts. It looked fairly simple, as well, although it involved a couple more steps. And as we were in the grocery store, he uttered the words I should have known were a red flag: "I might as well make the dough myself."

Rather than a one-hour task that would have seen us on the road at about the time the party was set to begin, in good shape to arrive fashionably late, the entire process, from preparation to flipping the finished tarts onto plates, took somewhere between two and a half to three hours.

As The Gryphon first made the dough, using our food processor to blend the ingredients, I helped him finalize his panel requests to be a panelist at Philcon. Then I helped him peel some apples, took a shower, packed the diaper bag, packed up loaned items we intended to return to their owners, and checked my e-mail while I waited.

Finally, the tarts were ready, The Gryphon showered, shaved and in costume, Kung Fu Panda strapped into his car seat, and the car loaded. It was two and a half hours past the time the party was to begin.

Fortunately, nobody had left yet when we arrived. In fact, the place was full to the gills. The room was so packed that I had a hard time getting through in order to change KFP into his costume. (I've had too many bad experiences with him spitting up on or wetting outfits I intended to show off to someone before they got a chance to see them. Surprisingly, though I'd brought several changes of outfit, KFP did nothing besides drool on his costume all night.)

After I'd changed him into his costume, I brought him back to the living room and announced, "This is the most sincere pumpkin patch ever. You are graced by the presence of The Great Pumpkin, who will give you all gifts." Then I took the borrowed items out of the bag and returned them to the proper owners. 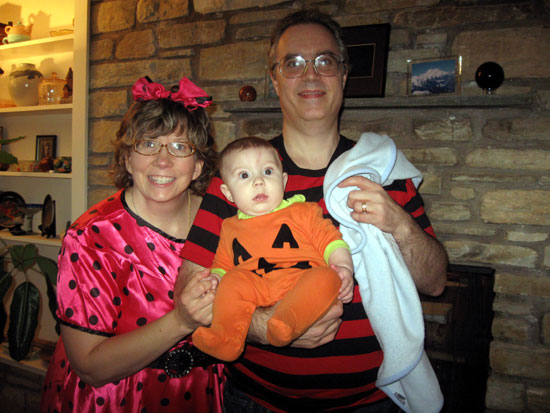 We dressed as Peanuts characters. I'm Sally, The Gryphon is Linus, and KFP is The Great Pumpkin.

Besides our host, hostess and their son, attending the party were The Cheshire Cat and The Paper; The Dormouse; The Cousin, her husband The Photographer, and their youngest daughter and a friend; The Paralegal; The Court Wizard; My College Roommate; The March Hare; My College Roommate's Ex-Husband; and a couple I recognized from other parties but whom I don't know terribly well. 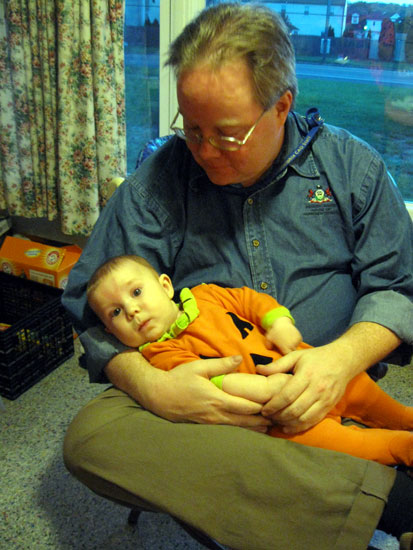 The Dormouse agreed to hold KFP while The Gryphon and I ate.
The Dormouse is dressed as a disgruntled government employee.
He had a name tag until KFP kept grabbing it! 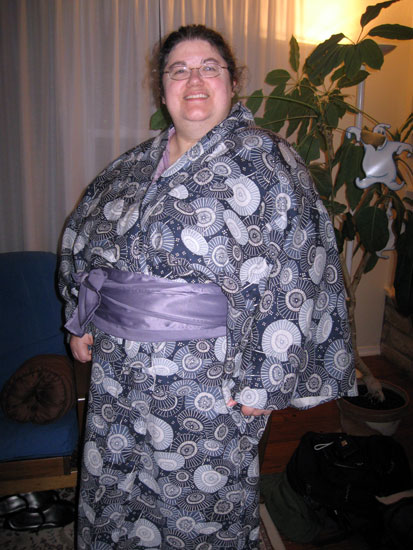 The Paper in a beautiful kimono she got at Otakon this year. 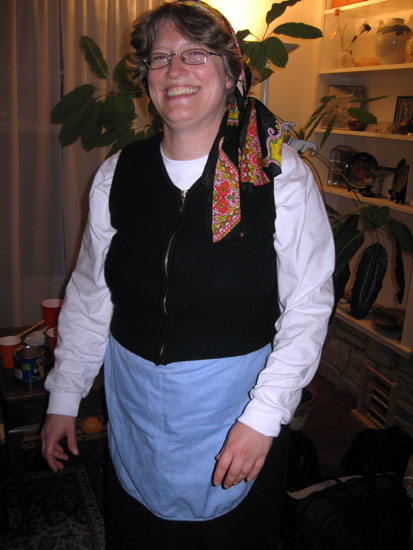 My College Roommate as a peasant woman.

There were soft tacos in the kitchen, which has become a Halloween tradition at this party. In addition, there was a homemade strawberry dessert, and various drinks and snacks. The apple tart, I'm happy to report, was actually worth the wait! It had the perfect blend of tartness from the apples with sweetness, and the homemade crust was flaky and delicious.

While in previous years, The Martial Artist had often dressed as a pirate while The Book Lover dressed as Arwen from The Lord of the Rings, this year they went as a farmer and his wife. She made a dress and apron from vintage patterns and went as "barefoot and pregnant," an appropriate costume, since she's expecting their second child. 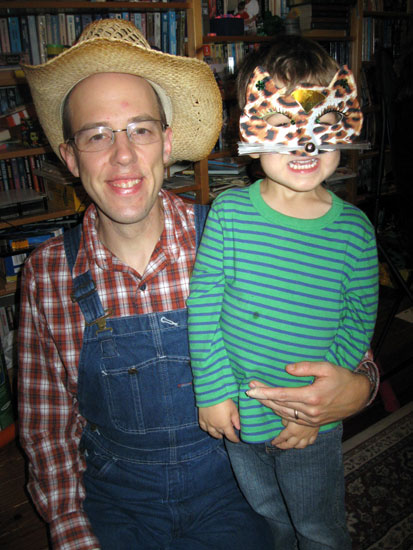 The Martial Artist as a farmer, and his son as a very impressive cat. 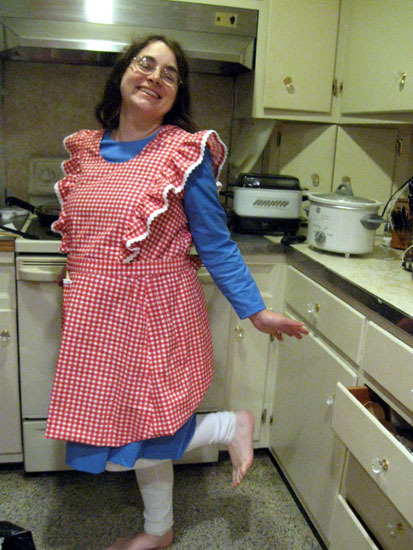 The Book Lover in her costume, "Barefoot and Pregnant."
She made the dress and apron. She is expecting their second child. 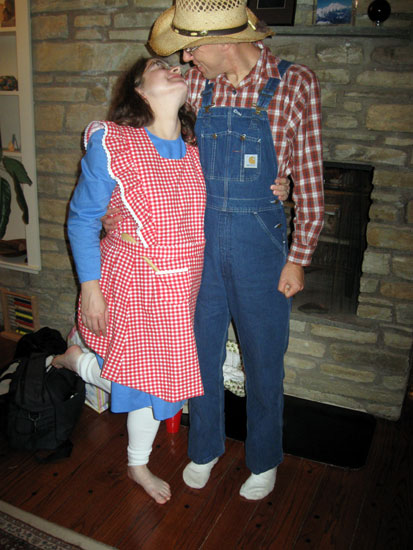 The Book Lover and The Martial Artist as a farmer and his wife.
She is barefoot and pregnant.

The festivities involved lots of conversation as well as a card game called Aye, Dark Overlord. I didn't participate, but I sat in on part of one game because My College Roommate wanted to hold KFP. It seemed like a fun game: very similar to the improv game "Story," where people tell stories and must pick up the thread from other players. In this case, they are all goblin minions trying to explain to their dark overlord while they have failed yet again.

Of course, rather predictably, KFP started grabbing everything within reach and trying to put them into his mouth, including the cards, the plastic table cloth, and the hair of the teenage friend of The Cousin's daughter. After My College Roommate passed him back, I made my way back downstairs to chat with some other people. I had some great conversations with The Book Lover and The Paper on topics ranging from parenting to wedding preparation. 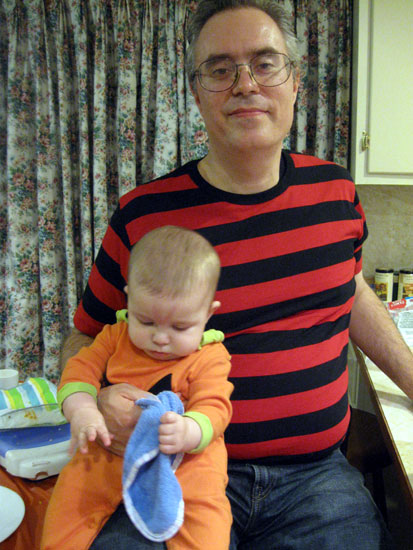 Our Kung Fu Panda, dressed as the Great Pumpkin,
amuses himself with a wash cloth on The Gryphon's lap,
who is dressed as Linus from "Peanuts." 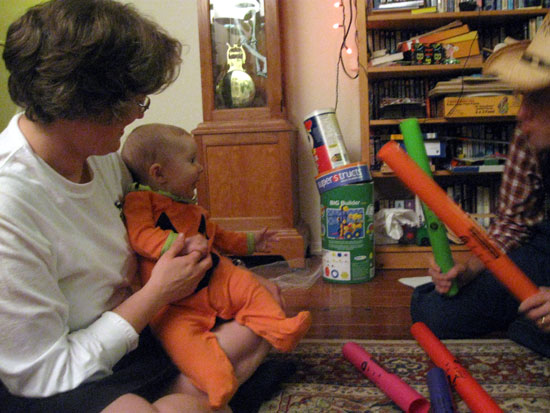 KFP, held by my College Roommate, is fascinated by the noise
made by several plastic tubes.

Later, after his son had gone to bed, KFP was still alert. The Martial Artist and I played with some plastic tubes that make noises when you hit them against the hard floor or on other tubes. This made KFP laugh and held his rapt attention..

A social little guy, our Kung Fu Panda was bright-eyed and active until we strapped him in his car seat for the return ride home. He slept peacefully on the long ride, perhaps dreaming of musical tubes and costumes.

Moral:
Our Kung Fu Panda is a partier.