therealljidol . I am not competing this season but invite you to read and vote for the "Winding Up" entries" and the "Here There Be Dragon" entries you could do either topic, so I went with "Winding Up." 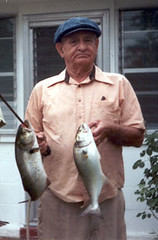 Grandpa Heritage shows off two fish he caught at his beach cottage.

My father's father died before he was born. We know him only through faded black-and-white photos. A thin, dapper man who looked a bit like Willem Defoe, by the time he died, at 48, he looked 20 years older.

My grandmother didn't remarry for about 30 years, and when she did, it was to the bulldog-faced, boisterous man I always knew as my grandfather, Grandpa Heritage. By then, he was retired as a federal prison warden, and I imagine that those he dealt with on a professional level saw a very different side to him. He was big, and I can imagine him being imposing, to someone else's eyes. But to me, my brother and my sister, he was a gentle man who made funny faces and sang off-key. "You don't like my singing," he'd complain, and pout. But the truth was, we loved every minute of it.

One of the most fascinating things about Grandpa Heritage was his collection of antique toys and coin-operated banks. When we visited Grandma and Grandpa in their apartment in Northern Virginia, the toys were lined up in a neat parade underneath one of the tables. We were not allowed to touch them, but Grandpa would demonstrate them at our request. Amazingly, considering how young we were, we honored these restrictions, although the toys sat within easy reach and we could have disobeyed at any time.

Many of the toys were made out of tin, the sort of thing you'd never give to a child today. All edges and sharp corners, with moving parts, they would never make it past inspection. But we watched, fascinated, as Grandpa wound up a goggle-eyed monkey, who banged his cymbals jerkily. We marveled at the bank where, once you inserted a penny in the tree stump, a bear would rise up and sweep it away. Every time we visited, we'd beg for a demonstration.

It seems strange now to admit that, of all his toys, those are the only ones I remember clearly. I know he had many more, and I know that they delighted us. But Grandpa Heritage died 27 years ago now, not long after suffering a heart attack while visiting us in our Central Pennsylvania home. For years, I could not sit on the couch where it had happened without seeing him grab his chest. The toys, like most of his possessions, passed not to us, his step-grandchildren, but to his children and grandchildren from his first marriage.

Although I corresponded with one of his sons, a fellow writer in the D.C. area, for a long time, I have not written to him for about 10 years. The families stitched together by Grandpa Heritage's marriage to my grandmother were torn asunder at his death.

Of course, as anyone who has ever loved someone knows, those toys don't truly matter: only our shared joy as my siblings and I watched him demonstrate them; only the impossibly gentle voice coming out of that tough face as he told us the stories behind the toys. Just like I'll never hear "The Church in the Wildwood" without hearing Grandpa Heritage singing it, I'll never see an antique toy or coin-operated bank without thinking of him.

I intend to share these stories with my son, whom we've nicknamed Kung Fu Panda. His actual middle name is Grandpa Heritage's first name; he may not have been related by blood but was a truly wonderful grandfather. Bad singing and all.