therealljidol. I am not competing this season but invite you to read and vote for the many excellent entries. This week's topic is "Deconstruction."

Clicking on the images opens a larger version in a separate window.

Over the past five months, I've had a crash course in a foreign language. The native speakers communicate primarily through gestures, facial expressions, and vocalizations that change in meaning almost daily. While I've been totally immersed in this new language, I am far from fluent. Call me, rather, an advanced student of Baby.

Our Kung Fu Panda gets just as frustrated as I when he cannot communicate his needs or desires. Through trial and error, I've learned some valuable lessons. To understand Baby, you must take into account the face, body language, and vocalizations of the speaker. Still, Baby is a fluid language; a language in movement.

Some signs are so subtle, they're easy to overlook. For example, in this video shot in July, when KFP was a little more than a month old, I assumed that he was vocalizing his frustrations at his large hat falling over his face. If you listen to me chatting away, I seem blissfully unaware of his repeated protrusion of his curved tongue, a mouth movement we've dubbed "food face" because it tends to mean he's hungry.

Knowing that we never go anywhere until KFP has been fed, I might have noticed it but figured he couldn't still be hungry. Most likely, he was signaling that he wanted to suckle, a need which in those days was filled by a pacifier. Today, he soothes himself by sucking on his finger or his entire hand. 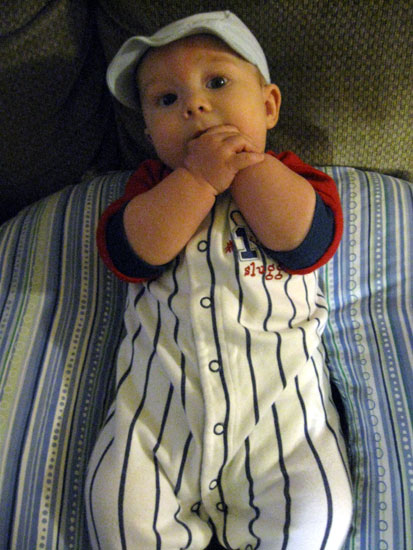 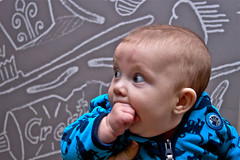 KFP comforts himself while taking in new surroundings.

He also sucks on his hands when he is bored or, we suspect, to help with the pain of teething. We believe he's teething because of his proficient drooling for the past two months, along with the ridge of would-be teeth you can feel through his gum line.

If his subtle signals are ignored, KFP tries his fallback communications method: crying. Even here, nothing is certain. There are different cries, ranging from the whiny wails of tiredness to the sudden irritated cry of discomfort from a wet diaper. Sometimes, there are multiple reasons for a cry.

In this video, also shot when he was about a month old, he first displays subtle facial signals or micro expressions, if you will. He had just woken up from a car ride, and he looks momentarily disoriented. Then his curved tongue indicates a desire to feed or suckle, and his sudden burst into crying at the end likely indicates either a wet diaper or frustration at being strapped in his car seat (one of the true banes of KFP's existence).

Now that he's older, KFP can display a full range of facial expressions which help to convey his meaning. People often comment on how alert and social he is, and he enjoys interacting with friends, old and new. His eyes light up with fascination and he looks around eagerly as he encounters a new situation. 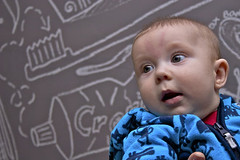 While visiting his daddy's office,
KFP is fascinated by all the new sights, sounds and people.

Even then, he may register conflicting emotions, such as a combination of uncertainty (indicated by sucking on his fist) and amusement (visible in the upturned corners of his mouth and wrinkled up nose). 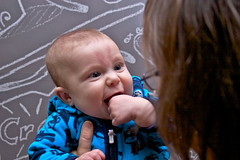 KFP laughs at the baby talk uttered by one of his daddy's co-workers.
Still a little unsure, he's sucking on his fist to self-soothe.

Once he feels more certain in a situation, he drops the magic thumb and enjoys a hearty laugh. 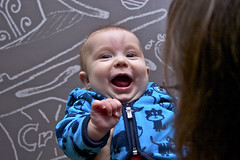 KFP laughs at something his daddy's coworker does.

He also sometimes gives a little chuckle that sounds like "heh heh," a sound reserved for times when he has conflicting emotions. For example, he may have just been crying due to hunger, and when I offer him my breast, he laughs a little bit before latching on.

If you watch his eyes, you can tell what kind of laugh he's delivering. When he's delighted or fascinated, his eyes grow as wide as his laughing mouth. 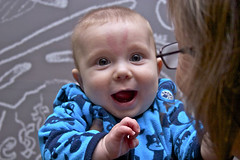 KFP is having a great time listening to his daddy's coworker
and makes eye contact with the photographer, another coworker.

Some communications, however, are fairly unambiguous, such as his frustrated face, characterized by a furrowed brow, raised eyebrows, and wide open mouth with down-turned corners. His cry in such moments is unmistakably angry-sounding: almost like a guttural scream.

KFP backs himself into a corner and cries for me to rescue him,
which I did immediately after snapping this photo.

It is also impossible to mistake the contented "milk drunk" face he makes when he's finished eating. His eyes closed, he presses his lips together, sometimes with a faint grin. At times, as he snoozes after a feeding, he continues to make little sucking movements with his lips, as he if sucking on an invisible nipple. 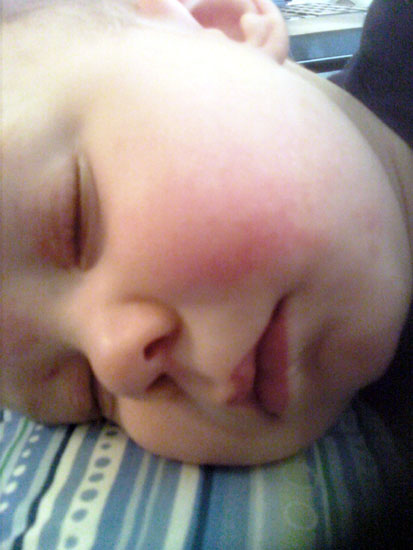 KFP after having his fill of milk.

KFP's first vocalizations, other than crying, sounded like "eh." This was a multipurpose sound which he used in place of spoken communication. It could mean, "That's interesting," "Look at me," "I'm trying to figure something out" and many more things, as well.

Next, he moved to making "guh" sounds and began making the sound "ah-goo." He began to understand the idea of conversations. If you spoke to him and left a space, he would often "reply" with "ah-goo" sounds. I once found him holding one of his favorite toys, a plush dog with a blanket for a body, up to his face, cooing at it, "Ah-goo, ah-goo." Sadly, I could not get to the video camera in time.

Lately, he's added new sounds to his repertoire, adding "buh," "muh" and "wuh" sounds. My efforts to capture his "speaking" have been largely fruitless. He could be babbling away in Baby, but when I pull out the video camera, he clams up. I was somewhat successful this morning, capturing some cheerful babbling while he played in his bouncer.

Like the sound "eh," his new "words" are mutable. Lately, when he's crying, he often seems to be howling, "Mama!" Still, he will not repeat it when prompted. However, my lightning-fast response to a word that sounds like "Mommy" might eventually encourage him to use it more often.

The other morning, he combined sounds into an invented "word" that sounded like "abuhwuh." Initially, this seemed like a happy utterance, meaning "I am content." However, a few minutes later, during a diaper change, he twisted his little body, grabbing the edge of the changing table and wailing, "abuhwuh," clearly meaning "I am uncomfortable and/or frustrated." Maybe that's how the word "Aloha" was coined.

For the past month, we have been using some sign language with KFP, primarily for "eat" and "change" but also for a few other things, like "cat." Perhaps he'll pick it up and, before he's able to speak clearly, will be able to communicate his needs more definitively. Until then, I continue my Baby immersion course, seeking to interpret his ever-changing language.

Moral:
Derrida could have made a career out of deconstructing Baby.