I hope all my American friends are enjoying the Thanksgiving holiday. Today I stopped in at the newspaper where I used to work to give a copy of my book to my former boss. She's agreed to take a couple copies to sell, along with some of my promotional cards to distribute.

(Click any of these photos to see a larger version.) 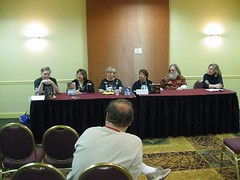 I participated in a panel on Saturday morning about writing for an audience. 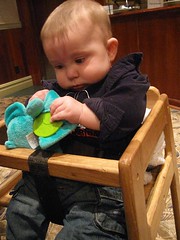 Kung Fu Panda sat in a high chair for the first time at the hotel restaurant
while we were having lunch. Soon, though, he opted for my lap instead. 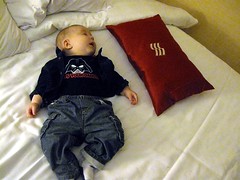 After lunch, KFP took a nap on the hotel bed in DJ Rock's room.
He allowed us to use it for our baby needs.
Yes, KFP is wearing a T-shirt with Darth Vader on it reading "Who's Your Daddy?" 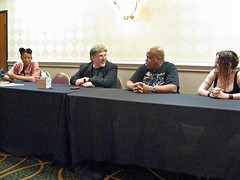 The racefail panel was a great discussion.

hughcasey is second from left, and 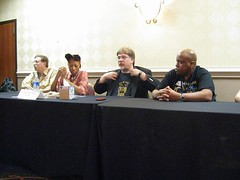 One of the panelists for the Racefail panel (at far left) had to show up late. 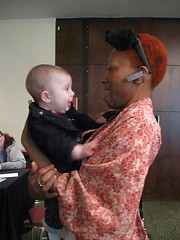 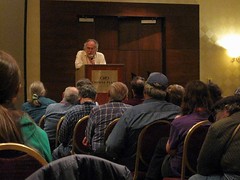 I only got to catch part of Peter S. Beagle's key note address because KFP got hungry. 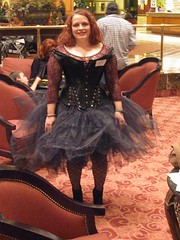 The Goth Grrl wears a very dramatic outfit on Saturday night,
complete with leather bustier and a skirt made of stiff netting. 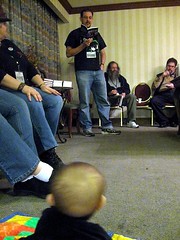 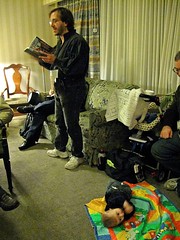 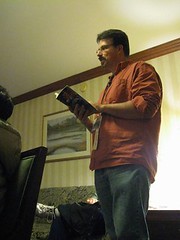 A writer reads from his work at the Web site launch. 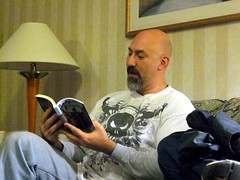 A participant reads a story at the web site launch. 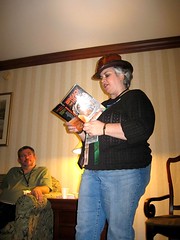 Moral:
You're never too young to appreciate a good reading.