therealljidol. I am not competing this season but invite you to read and vote for the many excellent entries. This week's topic is "Not of Your World." 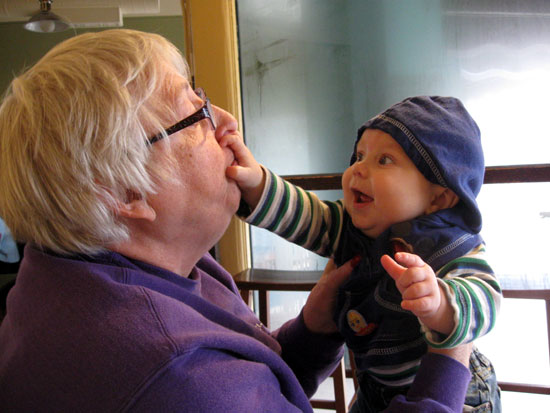 Kung Fu Panda greets a friend by touching her face,
a traditional greeting in Baby World.

As I observe my six-month-old son, whom we've nicknamed Kung Fu Panda, I realize that his world is very different from ours. From reading baby books, however, I've learned that his world is similar to that of other babies.

In Baby World, it is a great indignity to wear clothes. While reclining nude or wearing only a diaper, KFP waves his unclothed arms and legs in a blissful baby dance. But as soon as we strive to work his arms into sleeves, he objects with a coughing cry, his little face screwed up as if to say, "Why? Why did you ruin a perfect moment by making me wear a shirt?" My husband, The Gryphon, and I joke that he thinks that clothes are just specially designed blankets. If he could, he would request that we no longer use the blankets that fit over his arms.

Baby World tastes delicious. Therefore, the proper way to experience Baby World is by putting things in your mouth. KFP marvels at the subtle differences in taste and texture between his plush Elmo and his teething snail (which both smile relentlessly through all his gnawing). When presented with a new thing, whether it be a library book or a friend's finger, our Kung Fu Panda gets a good grip on it, opens his mouth as wide as possible, and nom, nom, noms away.

At mealtimes, KFP has let us know how rude it is, in Baby World, to eat in front of babies without offering them something. Even if he has just eaten, when he smells chicken or spaghetti or tuna casserole, he lets us now how hungry it makes him. For this reason, I end up eating a lot of my meals one-handed, lifting a fork or spoon over a nursing baby.

Objects and people in Baby World disappear when you cannot see them. As you might imagine, this can be very distressing. Last night, our Kung Fu Panda was sleeping in his crib while I did transcription work at my computer in the same room. I took a break to check on laundry, and when I returned, he was crying a desperate cry. His face looked terrified, as if he feared he might never see me again. Even after holding him and rocking him for several minutes, he was still sobbing, clumsily caressing my face with one hand, to reassure himself that I was real.

Lately, however, his Baby World has been changing. He now connects voices with the people to whom they belong, even if he cannot see them. While my sister called last week, I let her speak to him. As she said his name, his face lit up. He turned towards my cell phone and gave it a big, sloppy, open-mouthed baby kiss.

KFP would be delighted to tell us that Baby World grows more exciting every day. He remains fascinated with old discoveries, like our kitty, Luke (last night I could swear he tried to say, "kitty kitty" but without the "T" sounds). Moment by moment, week by week, his world expands. From model trains ("choo choo!") to the fat jolly man he met today who Mommy assures him brings toys at Christmas (whatever that is), Baby World is full of wonders.

Moral:
Babies have a way of reshaping priorities.