Up until just about two week before New Year's Eve, we had no plans. Our friend, the White Rabbit, who has hosted an annual NYE party ever since I first convinced him to when our friend The Paper stopped running one at a local hotel, had decided to take the year off. Finally, My College Roommate stepped up and took over the celebration.

Of course, it was a pared-down affair, partly in due to her smaller digs. White The White Rabbit has a little house, she lives in a two-bedroom apartment with her son.

The attendees, in addition to our host, included The Cheshire Cat and his wife, The Paper; The Dormouse; Batman; The Court Wizard; a former neighbor of My College Roommate's and her daughter; and two other Penn Staters we knew from back in the day. 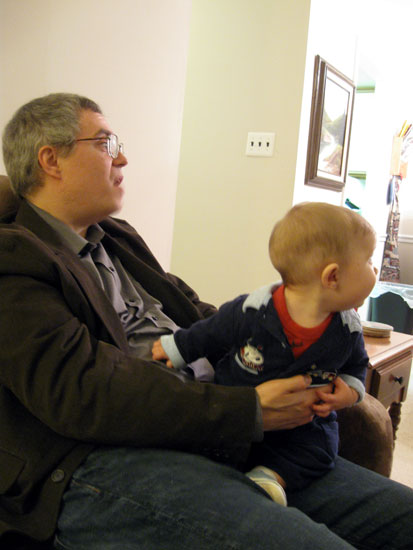 Kung Fu Panda and his daddy, The Gryphon.
KFP was very interested in everything going on.

The party was a potluck. The Gryphon and I brought a Ravioli "Lasagna," a recipe from our Rachael Ray book. It was full of vegetables like asparagus and was very popular. There was also chili con carne, a chicken dish, couscous, a vegetable tray, cheese and crackers, cookies and candy, and a no-bake chocolate cake. Drinks included a variety of sodas and several choices of wine. Also, the Dormouse brought some alcoholic egg nog given to him by a former co-worker.

Of course, KFP's enjoyment at the party didn't come from the food. He liked his new friend: an Elmo toy as big as he was. When I took him over to it, he babbled at it and interacted with it for several minutes, seemingly thrilled. 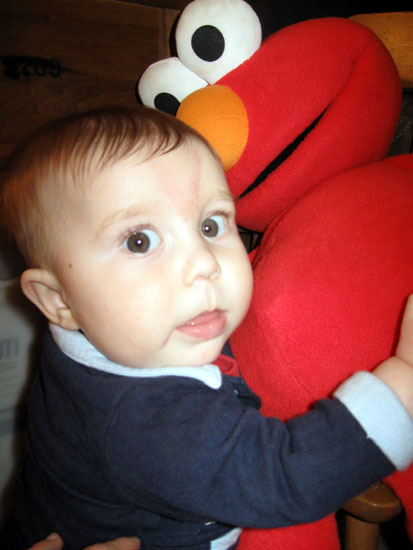 KFP greets a friend: an Elmo toy as big as him.

He also entertained himself by playing with the toys we'd brought him, such as his new favorite book: a cloth book from his grandma. For some strange reason, though, he cried almost every time my College Roommate tried to interact with him. We think it might have been because he was tired. 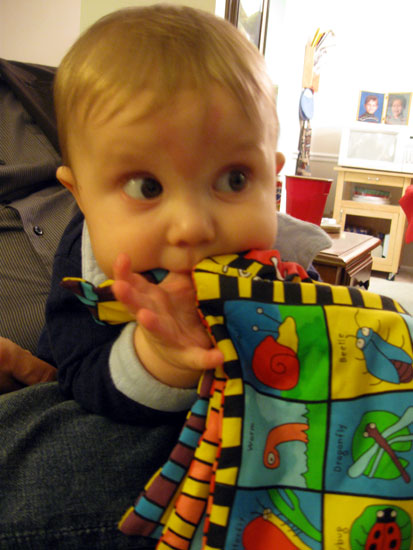 KFP enjoys his favorite book: a cloth book that he can easily fit in his mouth.

We did manage to put KFP to sleep in his car seat in one of the bedrooms for about an hour, but then he was up and cried every time we tried after that. He was, of course, sleepy, and he napped some in The Gryphon's lap. He also helped me out with a card game I played with My College Roommate and the two Penn Staters, a married couple who found each other after their first marriages didn't work out. It was good to see them again. We played a game called Texas Nine, which is a lot like a game we played in junior high school called Golf. Then we played Rummy. 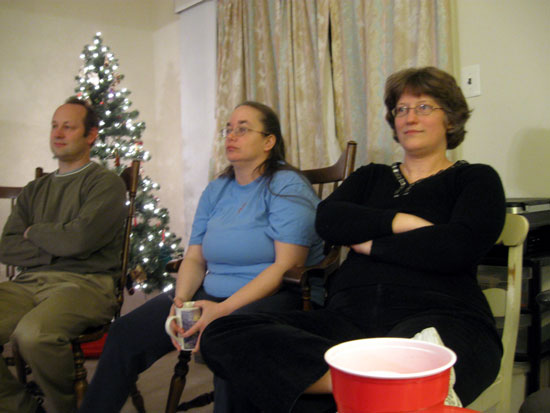 Our hostess, my College Roommate (at right) and two more Penn Staters.

At midnight, we turned on the TV to watch the ball drop and then local fireworks over the Delaware River. Kung Fu Panda was fascinated by the fireworks display and, much to my delight, enjoyed the midnight kisses from his daddy and me. The adults had either a champagne toast or sparkling grape juice (provided by The Gryphon and me). 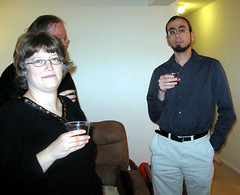 My College Roommate, The Dormouse, and The Court Wizard enjoy a toast at midnight. 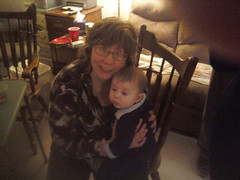 Me and my little guy on New Year's Eve.

Even though he wouldn't really sleep at the party, KFP conked out on the car ride home. We'll tell him, one day, about how he spent his first New Year's Eve, hanging out till midnight and helping his Mama play cards.

Moral:
Babies know when there's a party going on.

Recent Posts from This Journal