This past weekend, The Gryphon, our Kung Fu Panda and I attended Com Con, the annual staff retreat for Otakon. I took lots of pictures, although admittedly, a lot of them are of KFP! 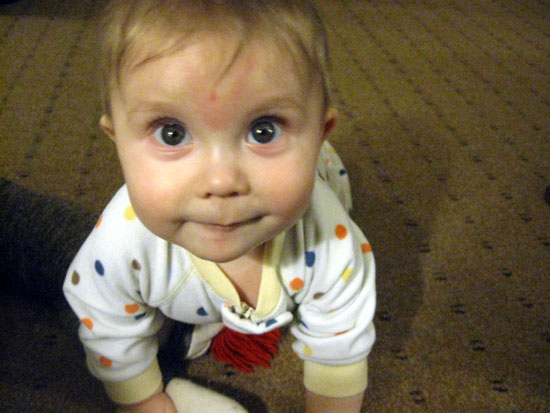 We had a rough trip getting there, with KFP crying most of the way
despite several stops to placate him. He scratched his forehead out of frustration.
Once we arrived, though, he happily cruised the hotel room in his sleep sack. 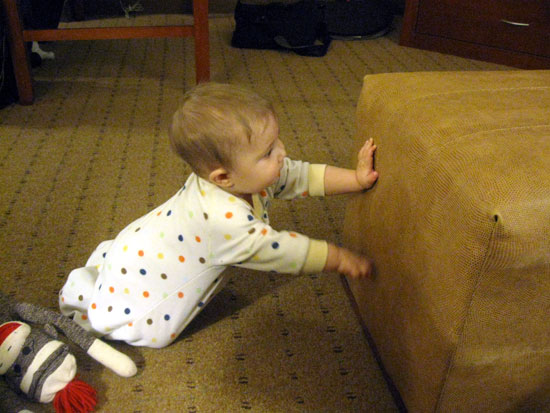 KFP's new obsession is climbing anything possible in order to reach a standing position.
Here, he tries to climb the ottoman in our hotel room. 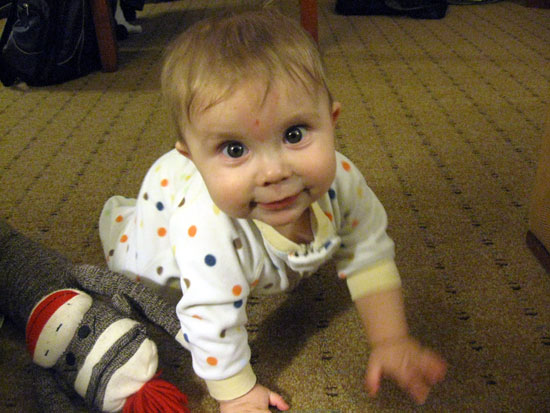 KFP has fun playing with his sock monkey.

We started the day on Saturday with some time in the pool, since KFP had missed his Water Babies class; but only for a short while, because some other kids were being loud and splashing a lot, which seemed to weird him out. 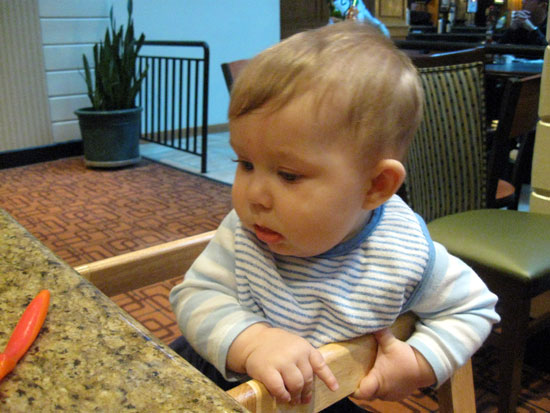 At breakfast, KFP sat in the high chair and had some applesauce and rice cereal. 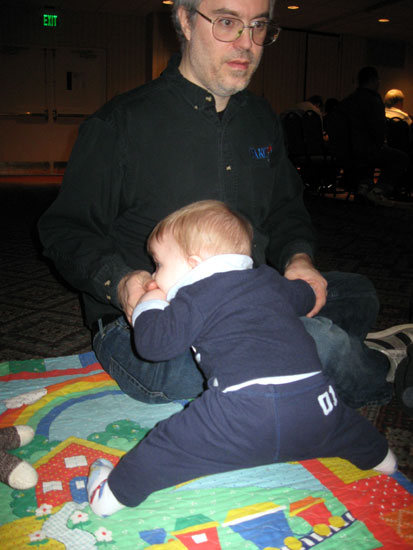 KFP practices his side stance while tasting The Gryphon's thumb.
We hung out near the back of the meeting, on a blanket.
I left with KFP at around 2 p.m. for his nap. 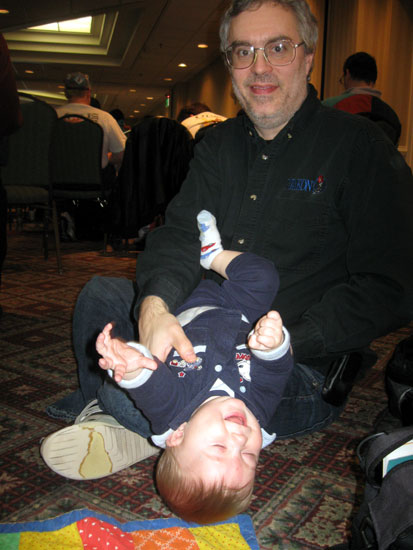 KFP plays a favorite game with his daddy, The Gryphon,
which involves being held upside down. 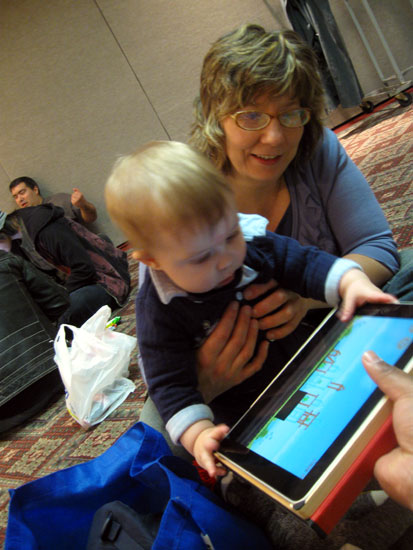 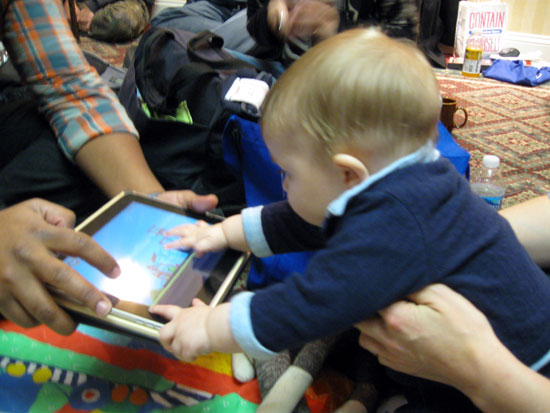 KFP is entranced with the iPad game Angry Birds.
With some help, he even managed to slingshot the house that some bad, green pigs inhabited. 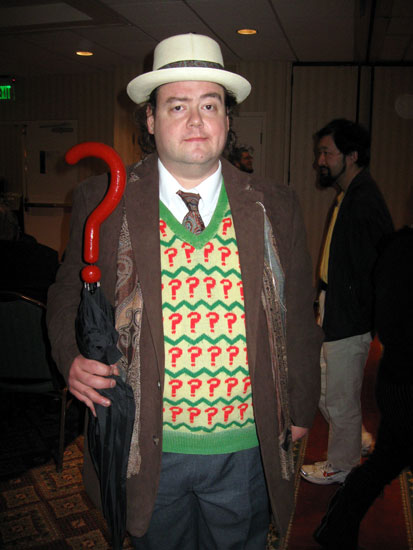 At the Saturday night dinner, where people traditionally dress up,
The Mad Hatter shows off his Dr. Who costume. 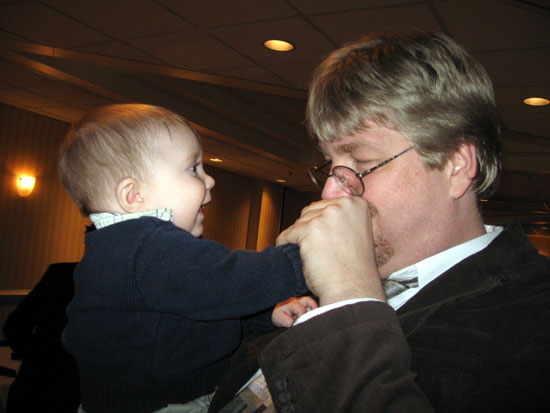 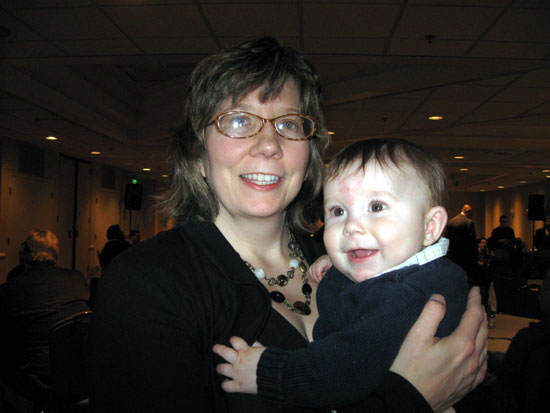 KFP and I at dinner, in our nicest clothes. 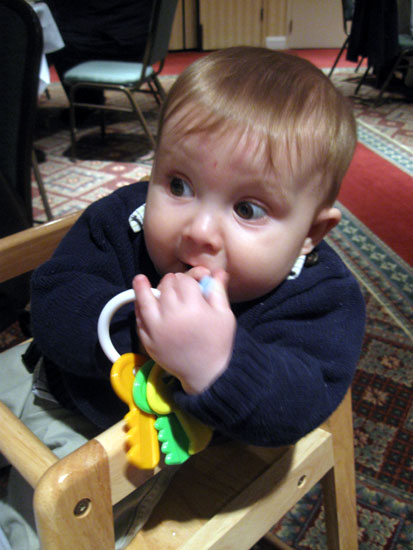 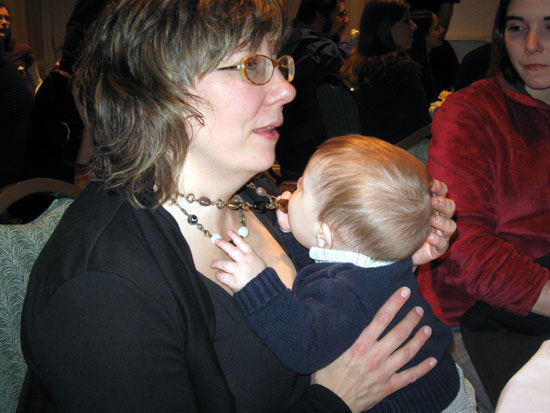 I wore a necklace I got for Christmas,
which KFP thought was just delicious! 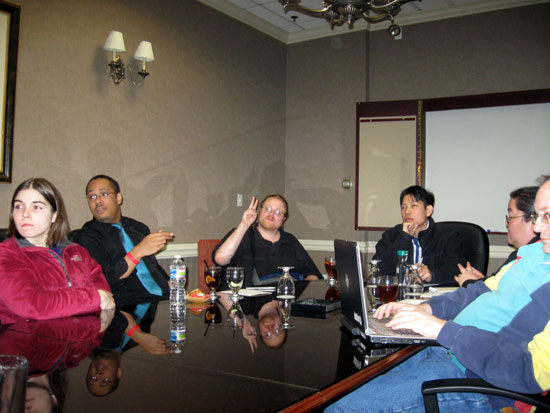 The Guest Relations department, of which Press Relations is a section,
meets to make plans. Flashing a peace sign is the Guest Handler. 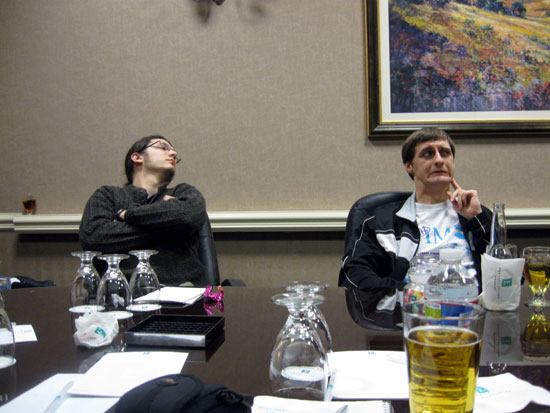 A staffer responds to a regrettable idea, with a very expressive grimace. 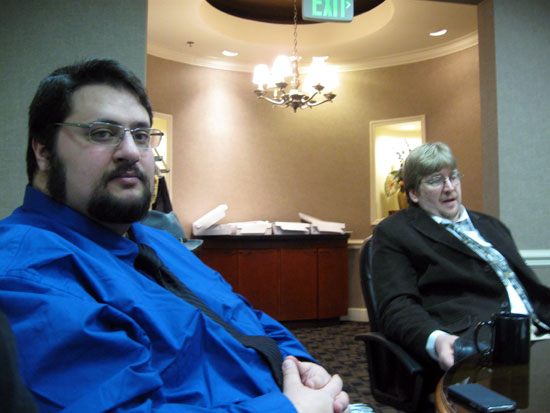 At left, in blue, is Radioactive Man, the new head of Press Relations.
To his right is the Godfather, who's stepped down as head of Guest Relations. 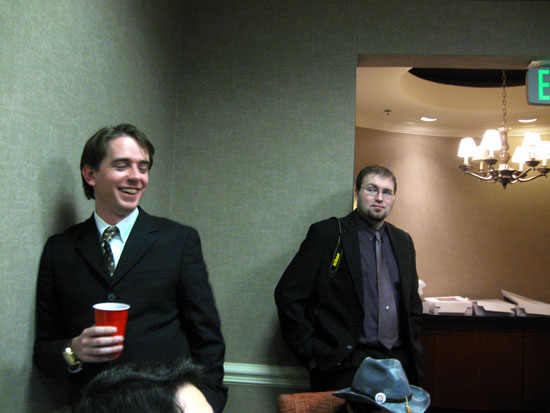 This year's head of Tech Ops (left) and the Otakon president
listen in on the Guest Relations meeting. 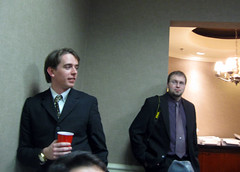 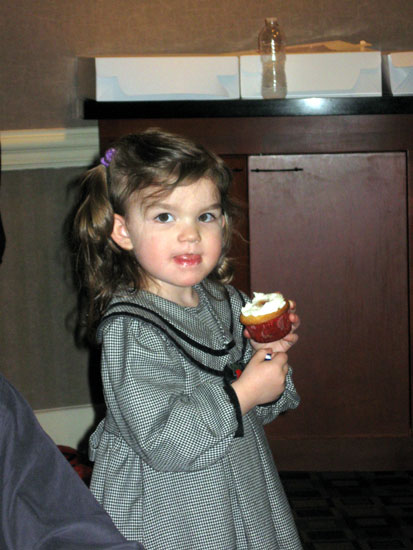 The youngest daughter of The Scrapbooker and The Smiling Man enjoys a cupcake. 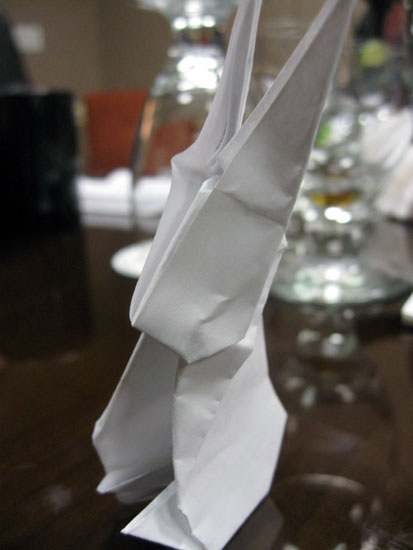 One of the new Press Relations staffers created this adorable origami bunny. 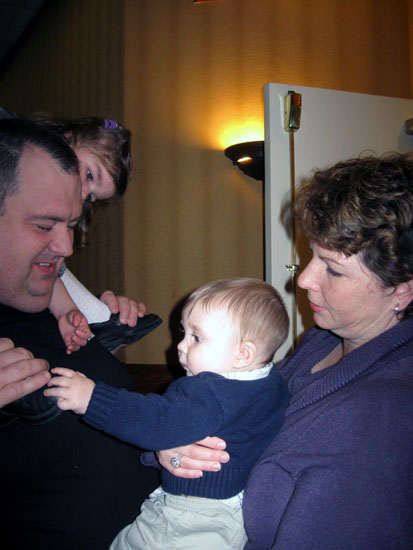 KFP is fascinated by the shoe of The Smiling Man's daughter,
who is riding on his shoulders. KFP is being held by The Scrapbooker. 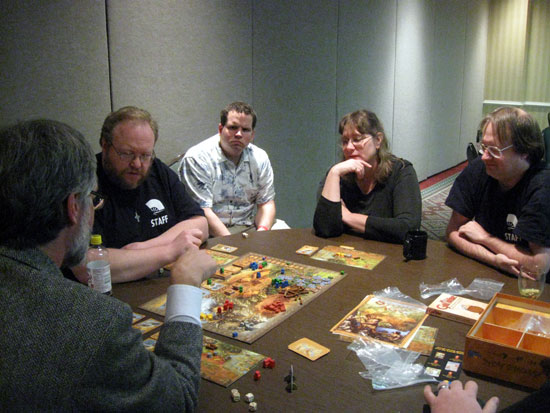 On Saturday night, some people enjoyed themselves with board games.
(from left) The Photographer, The Bhoo, an unknown staffer, The Cousin, The White Rabbit. 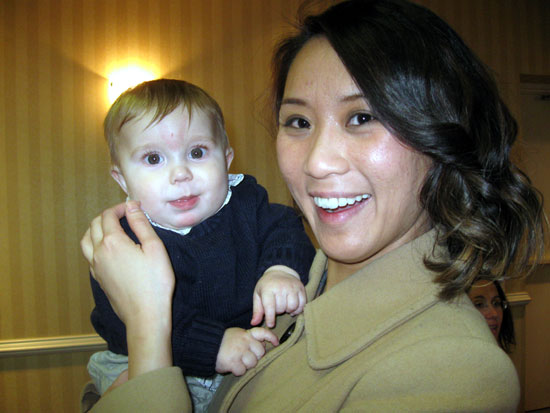 On Sunday morning, KFP enjoys hanging out with a staffer who's studying to be a teacher. 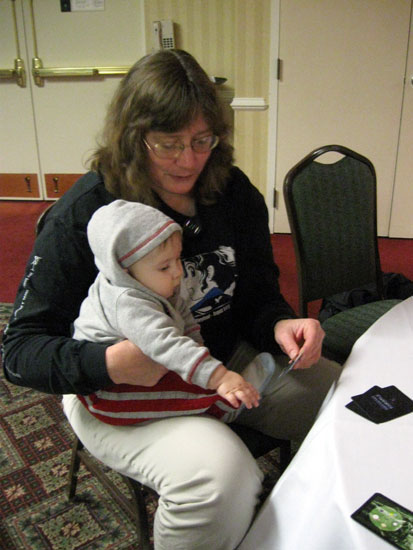 KFP tries his hands at a card game, sitting on The Cousin's lap. 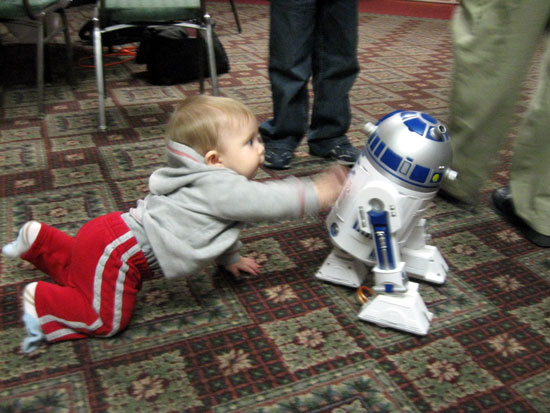 KFP is fascinated by a moving R2D2 belonging to the Mad Hatter.
He kept chasing it, and R2D2 would run away! 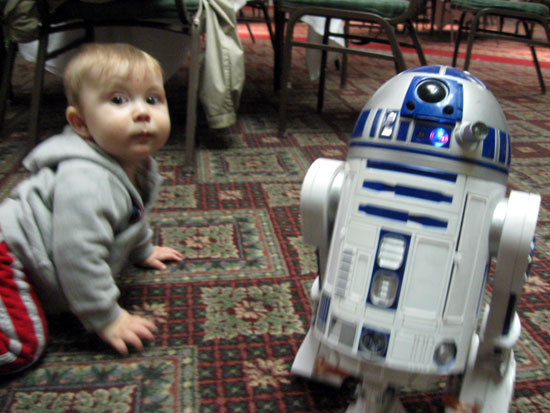 Our future Jedi with R2D2.

Before we left on Sunday, we watched the latest fan parody by The Video Editor, currently untitled. It was fun, getting better in the second half. KFP actually watched the first portion of it sitting on my lap and then, following some technical difficulties, slept on my shoulder for the rest of the movie.

Moral:
Our future Jedi is already showing his geek credentials.