When people used to pick on me as a child, I would often run home and tell my parents. My dad, who was convinced I was the smartest, prettiest, most well-behaved daughter anyone could ever desire, would listen to my tale of woe and conclude, "They must be jealous." If my peers picked on my choice of outfit, or called me chubby or "Four Eyes," I remembered Dad's words, and they helped. "They must be jealous," I told myself, and remembered that I was a straight A student who excelled in English, earned first-chair clarinet status in the band, and was the darling of all my teachers. So what if they teased me for my weaknesses: they only did it because they envied my strengths. 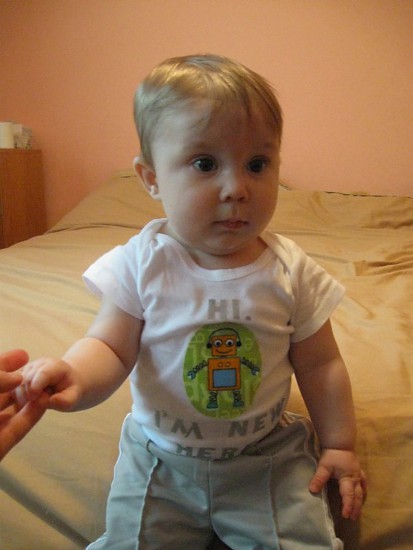 A recent picture of KFP, wearing a T-shirt made by
a friend that says "Hi, I'm New Here"

Dad's words helped me again this morning when I encountered a very unpleasant individual during the Babies and Books storytime at the public library, designed for children from newborn to 3 years old. We arrived just before the program started and sought a seat. I didn't spot our Kung Fu Panda's favorite participant, a little girl named Lucy who's only two days younger than him, so instead I took a spot in the only clear space in the circle. Maybe, I thought later, there was a reason that spot had been empty.

To our right was a young mother with two little ones in her lap: a placid, pleasant 2-year-old boy with warm, golden-brown eyes, and a cheerful 4-month-old baby girl with bright blue eyes who would sometimes reach out and touch me gently on the sleeve. KFP was briefly fascinated by the baby girl, who returned his smile.

On our left, however, was a little boy of about 3 named Jamal*, who had the misfortune of being brought to story time by his grandmother. I say misfortune because she had little tolerance for him behaving like a 3-year-old. While it's true that some youngsters, like the boy to our right, were enjoying some Mommy cuddle time, many of the babies and toddlers twisted around in their parents' laps, made vocal outbursts of excitement in response to the stories, or, if they could walk, toddled around the room investigating the other children and picking up items from the library's toy box.

Such behavior was not tolerated by Jamal's grandmother, who berated him constantly and slapped his little hand, buttocks, or any place she could grab if he dared to touch anything she didn't want him to touch. When he refused to sit calmly on her lap, she grabbed his arms as he tried to twist away until he was squealing in displeasure and discomfort. "Let him go," another mother told him, then added, "It's OK for him to stand." The grandmother reluctantly let him go but continued to smack him whenever he failed to react exactly the way she wanted, whether it was to refuse to parrot a word she uttered or to decline to sing along with the other children.

The minute I sat down next to her, she began making odd comments. As Jamal reached for the Cat in the Hat toy that KFP was playing with, she said, "Don't take that. She's got it." Finally, after using the female pronoun for him several times, she asked me if KFP was a boy or a girl. This struck me as odd, since he was wearing a very "boyish" outfit of a light-brown "Junior Explorer" shirt with a Jeep on it, paired with brown corduroys. I decided she must have been confused by KFP's large hazel eyes, rimmed with long, luscious eyelashes.

Throughout story time, Jamal and his grandmother created an unpleasant distraction, with her manhandling of him producing loud squeals. Forced into a situation where nothing he did was right, the little guy acted out by slamming down the book his grandmother brought over to read to him when story time was done. This was met by a predictable smack on his little bottom, making his pout even more pronounced.

Meanwhile, KFP gave the cry I knew meant hunger, so I pulled out the bottle I'd brought along. On Tuesday mornings, we wake up early so I can go to water aerobics, and he's often hungry again by 10:30 or 11. I held him in my arms as he happily sucked on the bottle, and the grandmother remarked, "That's a BIG bottle."

"He's a big baby," I replied. We give him 6-8 ounces of formula each time we give him a bottle, which is what is recommended for a 9-month-old. He also gets about 2 tablespoons of solid food (purees or finger food that can be gummed) two to three times a day, and breast milk pretty much whenever he wants it.

She was momentarily distracted by smacking her grandchild for some imagined fault and then returned her attention to my cherub-faced baby. "How old is he?" she asked, and I told her. Instead of remarking, as many people do, that he's big for his age (which he is and has been since birth), she said, a bit disdainfully, "He's a little chunky, though."

Chunky? Did she just call my little guy chunky? I probably should have informed her that, at 22 pounds (by our home scale), he was exactly average on the growth charts and, given that his length (i.e. height) is above average, that means he's far from chunky. Instead, I stewed silently and heard my dad's reedy voice: "She's just jealous."

Of course she was. Jealous of my cheerful, alert baby with the pinchable cheeks and Disney-esque eyes. Jealous of our quiet, bonding moment, as he lay on my lap sucking on a bottle and taking in the world around him. Jealous, even, of my relative youth, even though at 40, I was probably the oldest mom in the room.

As I fed the baby, Jamal put his little hand gently on my own. But before I could respond, she smacked his hand away. "Don't take that baby's bottle," she said. But that's not what he was doing. It is not milk that he hungers for.


* Name changed to protect the innocent

Moral:
Those who point out flaws in others are trying to distract from their own.