I'll take advantage of the fact that our Kung Fu Panda is taking a nice, long nap to get those pictures up I took last weekend. This was for my friend, The Artist's, baby shower. It was held in the upstairs lounge of a restaurant/bar in Baltimore's Fells Point neighborhood. She's expecting a boy, and her due date is just a little later than when I had KFP last year!

When we first arrived, a number of other parents were also arriving. KFP was fascinated by a 14-month-old girl named Camille who was very quiet. A few other toddlers attended and enjoyed running around the room during the shower. 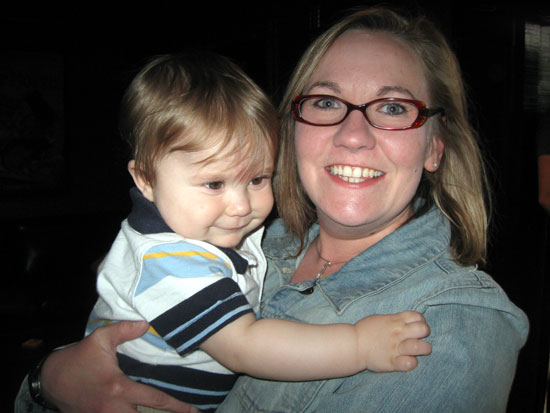 Our Kung Fu Panda is thrilled to see his aunt after several months. 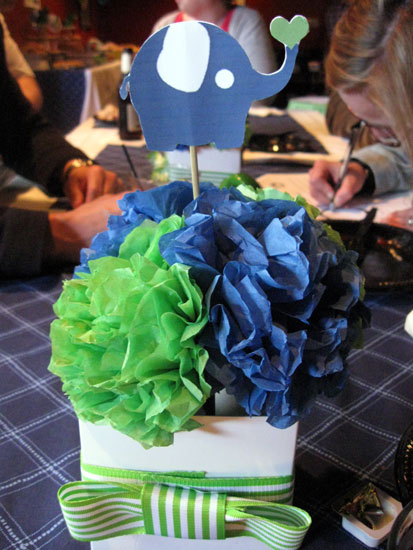 The baby shower had an elephant theme, including these lovely centerpieces
with a blue elephant stuck into an arrangement of green and blue flowers in a square white vase. 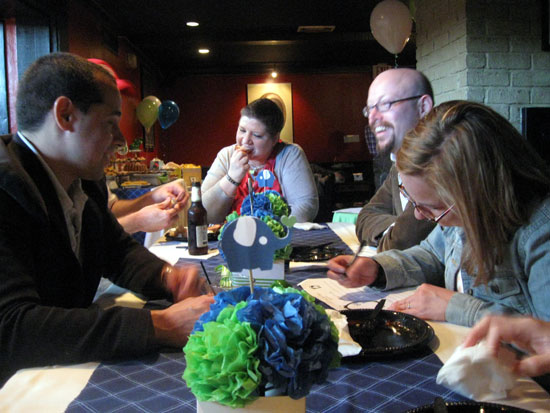 My friends claimed the only real table in the room (everyone else sat in sections that had couches and low tables).
From left is The Drummer, The Poet (obscured), The Poet's Wife, my sister's husband, and my sister.
She's working on filling out a guest book sheet where you had to give the couple parenting advice. 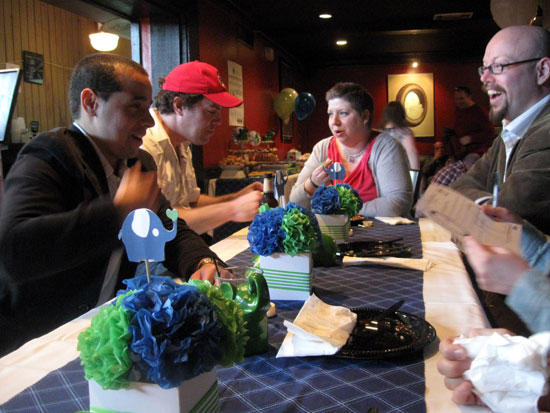 In this shot, you can actually see The Poet.
From left: The Drummer, The Poet, The Poet's Wife, my sister's husband.
It was the first time in years we'd all been together.
The last time was at The Artist's 30th birthday party. 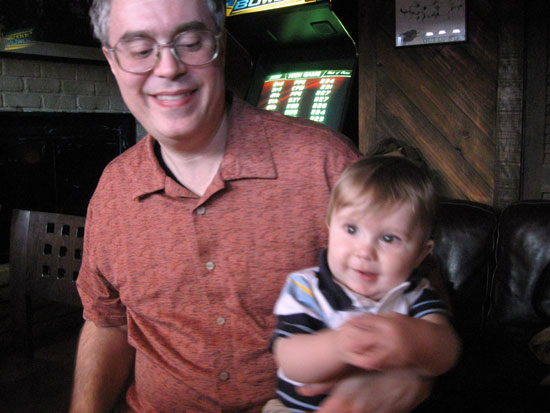 KFP has fun hanging out with his daddy, The Gryphon. 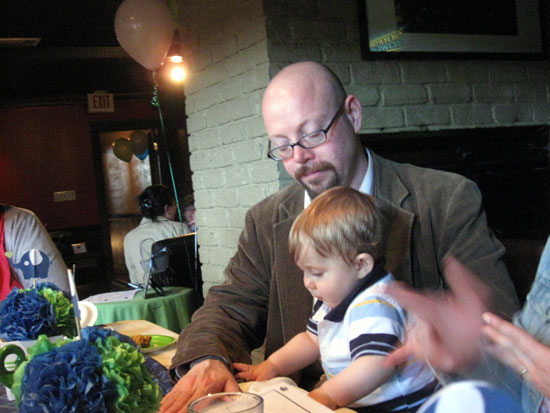 KFP gets into a clapping game with my sister's husband.

Video of KFP drumming with his aunt and uncle 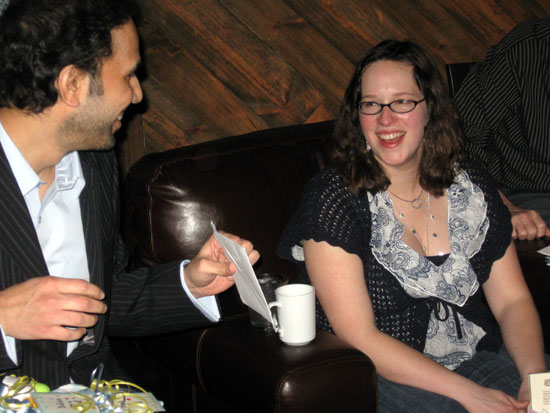 The guests of honor, the Artist and her husband, open their presents.
Ordinarily, I would have a lot more of these pictures, but I had to keep up with KFP!
This was the only really good one of the few I took. 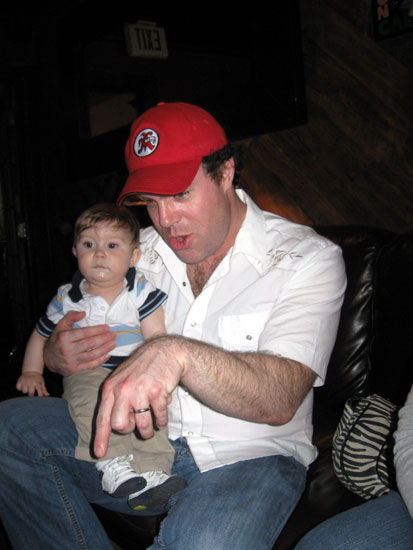 KFP crawled up on The Poet's lap on his own,
and the two got into a deep conversation. 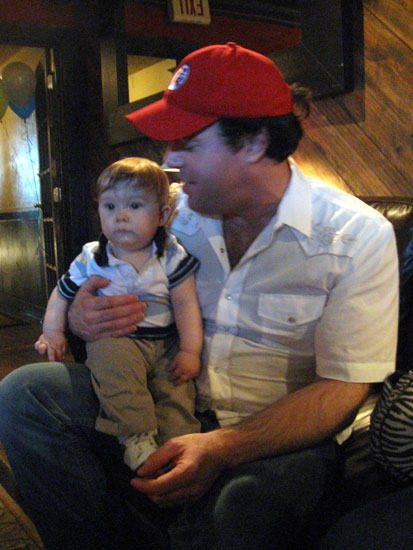 As you can see, KFP got very mellow on The Poet's lap.
You'd never believe he'd been cruising around the table,
babbling, at about 100 miles and hour, just beforehand. 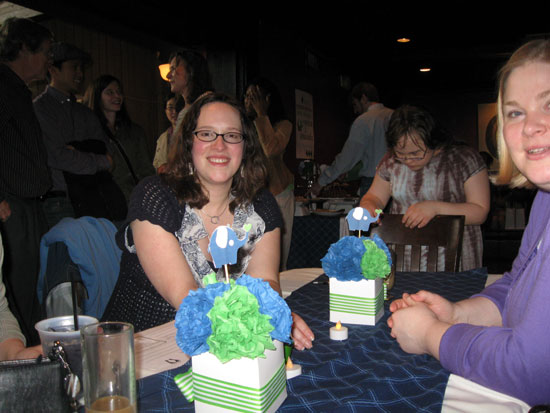 After the presents were all opened, The Artist did a little socializing. 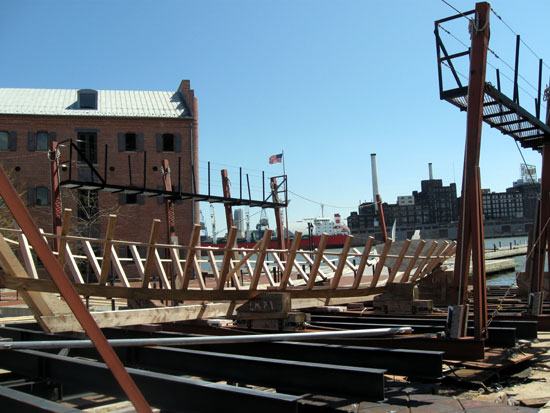 After the baby shower, a bunch of us took a walk in the neighborhood
and walked by this boat being built. Afterward, The Gryphon, KFP and I
joined some Otakon friends for lunch at the Bonaparte Bakery. 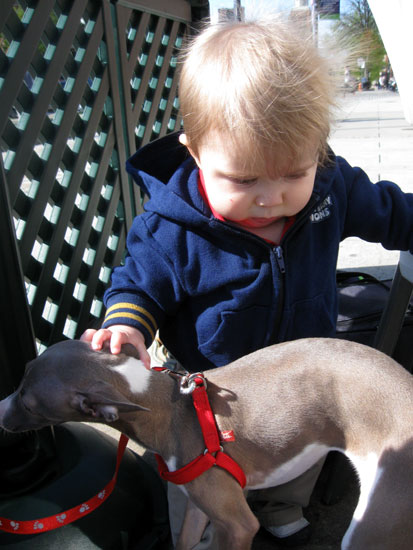 Our Kung Fu Panda pets a very sweet greyhound puppy named Bella
we met in front of the Bonaparte Bakery in Baltimore
on Sunday, April 17, 2011. I feel bad I didn't offer to get copies
of the picture to the dog's owner, so I'm hoping he finds this! 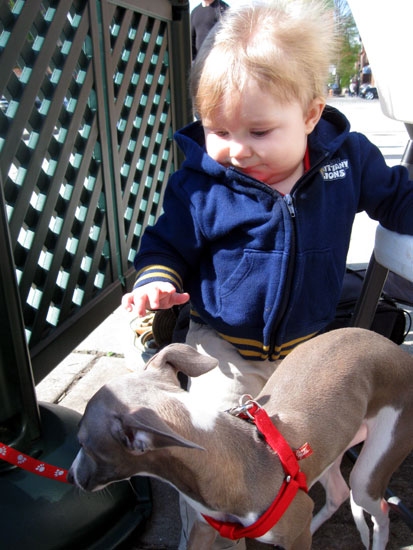 KFP was very gentle with the baby greyhound,
who seemed to love him. All the work on teaching him
how to pet the cat is paying off!