You'll have to excuse me for getting this post up relatively late today. After a morning of running errands and a difficult early afternoon with a tired, cranky baby, I managed to finagle two and a half hours of bliss, napping together while listening to WXPN while the fan wafted a breeze and the cat purred in the windowsill.

On Saturday, we asked my friend, The Improv Lawyer, to watch KFP so that I could take The Gryphon out for dinner and a movie, which would also be our date night for the month. We ate at Coyote Crossing in Conshohocken, a Mexican place where we were seated outside on a pleasant warm night. Then we saw "Super 8," which was a great movie. It reminded us both of classic SF. In the ladies' room afterwards, I overheard one woman describe it as "E.T. meets Creature from the Black Lagoon."

The morning of Fathers Day, we had a nice breakfast at home, which I prepared. Then I gave The Gryphon his cards (one from me and one from KFP) and gifts. 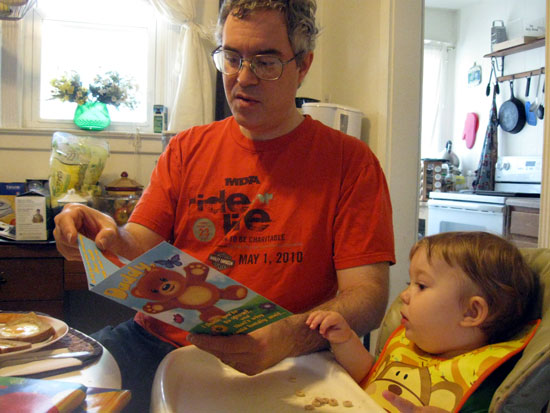 The Gryphon reads a card to KFP, who had helped select it.
He liked the bear on a spring that came out when you opened it. 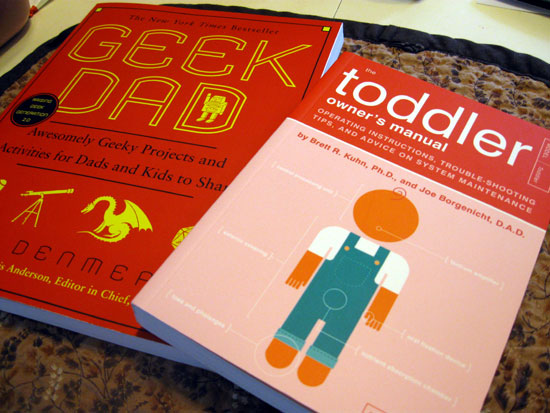 The Gryphon's gifts: the Toddler Manual and a book of projects
that geek dads can do with their children.

I ordered the books at Think Geek, which has a lot of creative gifts. The Gryphon eagerly flipped through "Geek Dad," looking for projects he can do with KFP when he's old enough: such as creating their own comic strips and making ice cubes that look like Legos.

Then, after a leisurely morning, we took a family outing to The Tot Lot at Smith Memorial Park, a playground specifically designed for children under 5. We had a little trouble finding it, because the street address confused our GPS, but we made it with plenty of time to play.

Of course, at his age, KFP didn't know where we were or what we were doing, just that Mama and Dada were excited about all the colorful playground apparatus. There were rocker-type toys to ride, with assistance, a toddler-safe maze, playhouses, a train, a boat, and even little drums shaped like alligators and toddlers, with attached rubber mallets.

KFP rides an elephant, with help 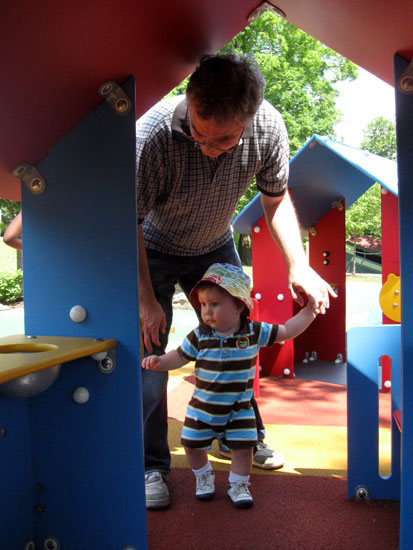 The Gryphon and KFP discover a little playhouse. 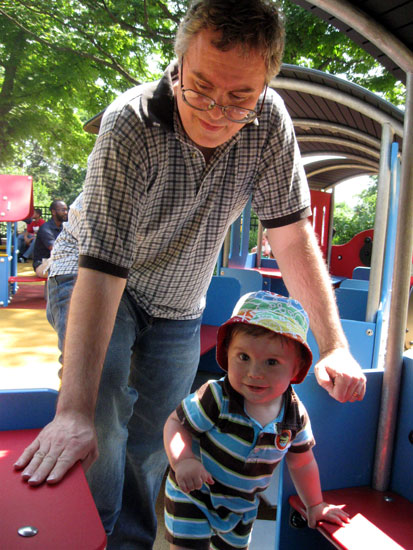 The Gryphon and KFP climb aboard a train.

Unfortunately, it had been a hot day and much of the playground equipment was too hot for us to let him touch it. Perhaps that's why his favorite thing at the entire playground was walking back and forth across a little bridge, with help.

KFP going back and forth over a bridge with help from his daddy.

Before we left, we explored the rest of the playground and were impressed with all we saw, including a playhouse with three floors of activities (if we'd known, we could have gotten out of the heat). Next time we'll arrive in the morning so the playground equipment is cooler.

We stopped for dinner on the way home at Carrabba's at the Springfield Mall. We even ordered something off the children's menu for KFP: the ravioli, without the sauce (so he could eat it with his fingers). He wasn't interested and preferred to eat the mashed peas we'd brought. He was, however, happy to feed his daddy Cheerios.

KFP gives the Gryphon a Cheerio.

We finished off the day with ice cream at Cold Stone Creamery (for the adults only: too many nuts to be safe). It's not Fathers Day ice cream unless a toddler is squirming in your lap! 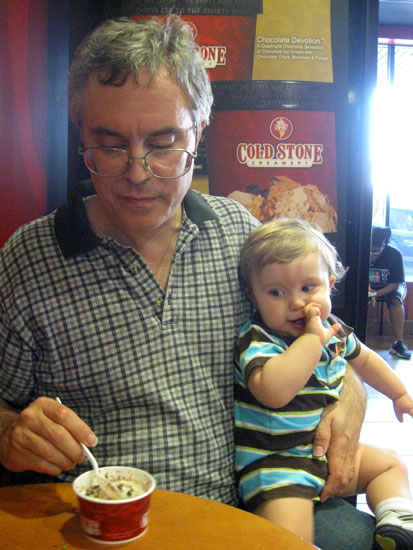 KFP sits in The Gryphon's lap while we eat ice cream.

Moral:
Fathers Day is fun even when only the parents know what's going on.