therealljidol. I am not competing this season but invite you to read and vote for the many fine entries. This week there are several topics, so I might not write about all of them. This is for the topic "Get Over Yourself." 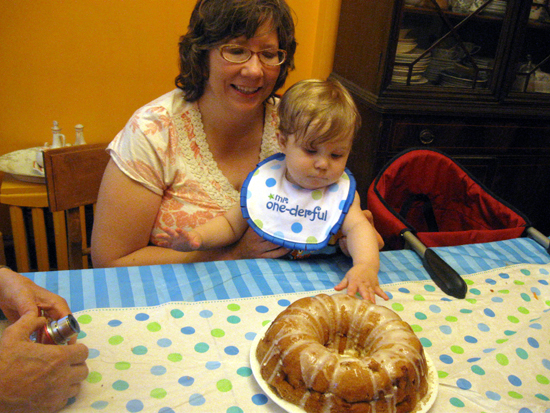 Me and KFP on his first birthday a few weeks ago

Why is it that on the days when I'm sleep-deprived and headachey, someone manages to say something rude and/or painful to me? This happened on Saturday. Our Kung Fu Panda hadn't taken a nap all afternoon and was one tired, cranky toddler. Since it was a pleasant, warm evening, I loaded him into his new stroller and took him for a trek around the neighborhood. I figured the twilight stroll would calm him down and, if I was lucky, start him nodding.

Instead, I encountered a woman walking her white bull dog. She recognized me, although I recognized neither her nor her dog. "A baby instead of a dog this time?" she asked me. I winced and told her that Una, my beloved nurse dog, died in October of liver cancer. She seemed sympathetic but then poured salt in my proverbial wounds: "So, is this your grandbaby?"

I took a breath and calmly told her, "This is my son."

She hardly seemed fazed and didn't even apologize for the question, unlike the drunk guy in a restaurant who, on Memorial Day, had asked The Gryphon and I if KFP was our grandchild. At the time I thought it was because of The Gryphon's hair, which started turning gray when he was in his 20s. This time, I had no such excuse.

This simple remark ruined the walk for me, and somehow, ruined it for KFP, as well. He'd been happy up until then, but half a block after that remark, he started crying so miserably I had to unstrap him and carry him in my arms for a while. I suppose he sensed my irritation.

Like my late Una, he is a sensitive little guy. When I had a migraine yesterday and was convalescing on the couch, I put "Sesame Street" on for him. Instead of doing what he normally does, and alternating between watching the screen and playing with toys, he watched it while standing right next to me, one chubby hand wrapped in my own. Somehow, he knew.

But at that particular moment, I was completely unaware that my son might be upset because Mommy was upset. I just kept thinking: "Why did she say that? Was it because of the flowered capri pants I wore while my khaki and olive capri pants were drying? Was it the bags under my eyes from being sleep-deprived? The 30 pounds of pregnancy weight I'm still struggling to lose? Did I really look like... a grandma?"

When I got home, The Gryphon tried to make me feel better. He told me that, while when I think of a grandma, I think of my own 67-year-old mother, there are, indeed, grandmothers who are only 40 years old. If, for example, I'd married my high-school sweetheart right after graduating, like many of my classmates did, and if my child had done the same, I could easily be a grandma. In other words, just because she assumed I was the grandmother didn't mean I looked any older than I actually was.

I expected some negativity resulting from my being an older mom, but I didn't expect it quite so soon. Perhaps KFP's classmates would laugh at the parents with the gray hair, I thought. I didn't expect assumptions from random neighbors.

Times like these, I wish I could get advice from my grandmothers, who had my mom and dad when they were each 40. Sadly, though, they both passed away long ago. I'm sure, if they could tell me, they'd share many similar stories. Especially my paternal grandmother, who was also a single mom, since my paternal grandfather died while she was pregnant. An older, single mom in the '40s? She must have heard rude comments daily.

A few days later, I'm feeling better. I bought a couple new shirts that look less matronly and more like the fashion-forward shirts I wore before I gained weight. I used an over-the-counter facial peel that I haven't used since getting pregnant, which was like a mini-facial. Instead of staying up to watch a show on the DVR after finishing my transcription work, last night I went to sleep and caught some extra Z's. This morning, when I looked in the mirror, I thought the woman looking back looked a little younger.

Really, though, that's the least important thing, isn't it? In the past year, nothing has mattered more to me than taking good care of my sweet little KFP. I've let a lot of things go, and yet I'm constantly aware of it, wishing I had my body back or my energy. But as I type this, KFP is sleeping in my lap. Occasionally, he reaches a hand up to tangle his fingers in my hair, which always seems to comfort him.

Just another reminder that, while I should never forget to do things for myself, I'm no longer at the top of my priorities.

Moral:
There are certain questions you probably shouldn't ask.