therealljidol. I am not competing this season but invite you to read and vote for the many fine entries. This week there are several topics, and I won't have time to write them all. This is for the topic "Disappointment." 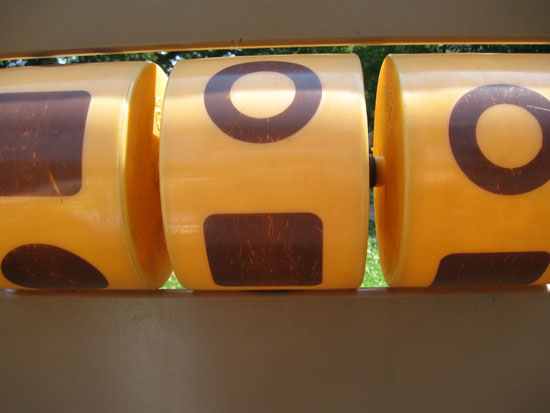 One of these things is not like the other
(playground shape game: one square and two circles)

When I took my little Kung Fu Panda to the park this morning, we had the equipment all to ourselves until, at about 11:30, a pack of kids accompanied by several teenagers and adults flooded the playground. They appeared to be members of either a summer camp or a day care program.

The children ran for the swings and slides, at first, but then I overheard an adult say to two girls, "I thought you were going to do the relay." They agreed and followed her, stopping to tell me, as they passed, that I had a cute baby.

As I held my sleepy panda and rocked us gently on the swing, I noticed one of the girls, standing on the asphalt path before us, her arms stretched out at her sides, making her into a "T." At first I thought that she was enjoying the occasional breeze that blew across the playground, which felt blissful on such a warm day. It took me a while to realize that all the other girls were amassed on the far end of the path, with the adult who'd mentioned the relay.

Only when the girls began running in pairs towards the human "T" did I realize why she was standing there. As they raced by her, they slapped her hands. She grimaced. She wasn't just a little girl enjoying the breeze; she was a human finish line.

When KFP dozed off, I buckled him into his stroller, set in the reclined position. I gathered my things then pushed him to the grass near the path. As I folded up the blanket, I asked her, "Are you the finish line?" She said nothing and shrunk a little bit into herself, no doubt told not to talk to strangers.

What turns a little girl into a finish line? Did she opt out of the race, so the adult decided to get her involved anyway? Was she the last one chosen, the odd one out? She certainly didn't seem happy to be filling this position.

She did, however, get her revenge. After I'd loaded the blanket and was strolling away, I overhead two girls who'd just raced, as they returned to the starting line. "She pulled her hand away," one of them complained.

The other agreed: "She did it to me, too. I didn't even get to touch her."

Despite myself, I smiled.

Moral:
Inclusion can be a double-edged sword.