To Be Less Lame

I haven't forgotten about all my LJ friends. Right now, I'm spending almost every available free moment (when I'm not diapering, feeding, comforting, reading to, or playing with my little Kung Fu Panda) working on the next issue of Wild Violet, as well as working on planning Wild Violet's 10th anniversary celebration, a reading to be held at 8 p.m. on Saturday, October 1 at Milkboy Coffee in Ardmore, Pa.

A couple weeks ago, I uploaded some Otakon pics to my Flickr account. Finally, I've added some captions and can share them. These are all from Thursday night. When I get a chance, I'll share more. Plus, I've got a week's worth of vacation pics plus entries I wrote while I was away!

As soon as we'd arrived Thursday night, we checked into our hotel room. Then I went to work in Press Ops, helping to check in arriving press. 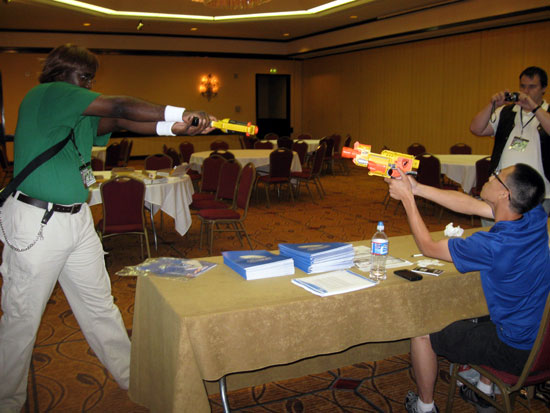 A registered press member gets into a shootout
with the News Producer in Press Ops on Thursday night of Otakon 2011. 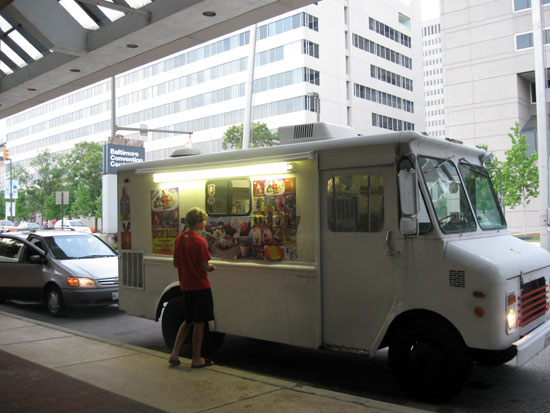 An ice-cream truck parks outside the Baltimore Convention Center. 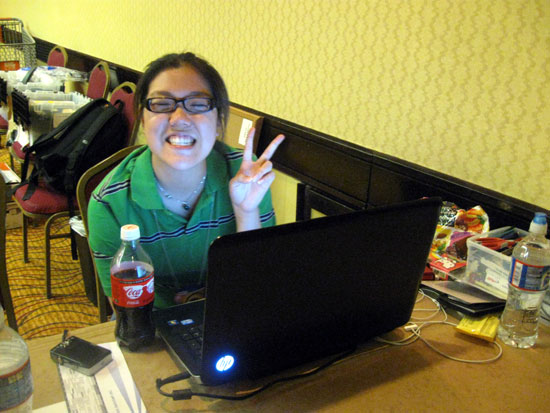 One of the Press Ops staff flashes a peace sign.

When Press Ops closed, I took a walk around the Baltimore Convention Center (BCC) to see what the other staff were doing. 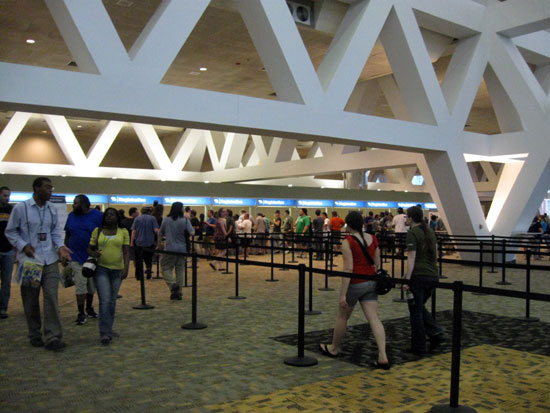 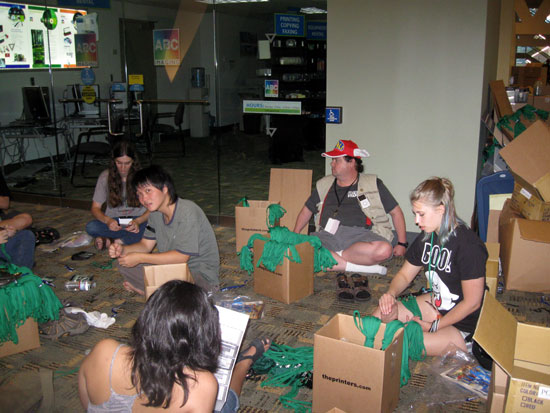 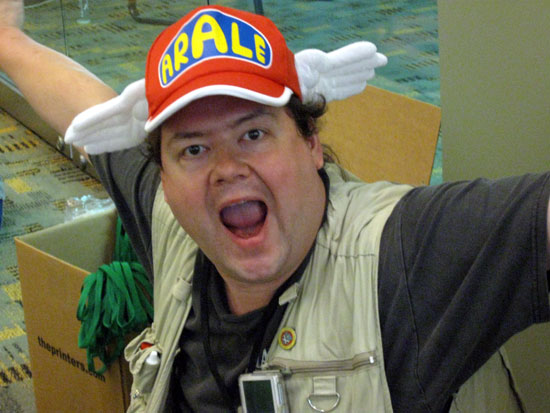 My friend, The Mad Hatter, hams it up 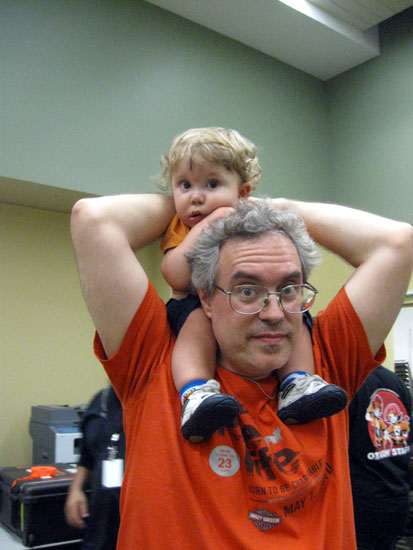 KFP gets a ride on his daddy's shoulders. 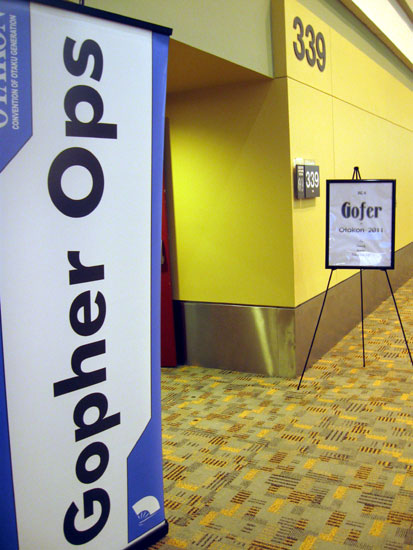 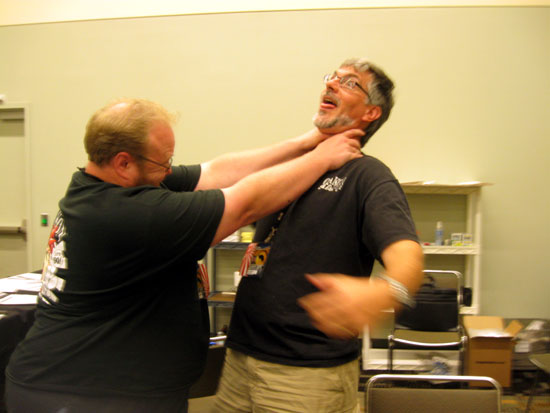 The Bhoo and The Photographer work out
some differences in Gofer Ops. 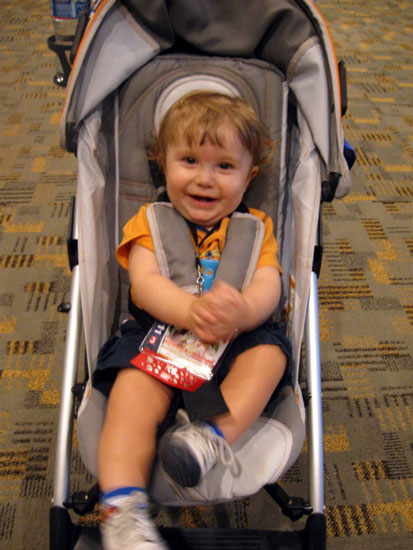 KFP is proud of his spanking new badge. 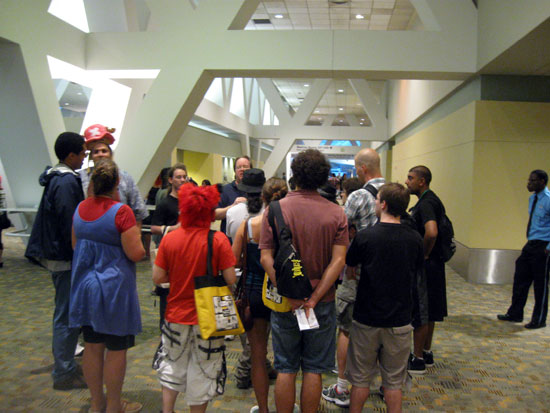 The Dormouse shows some Gofers around. 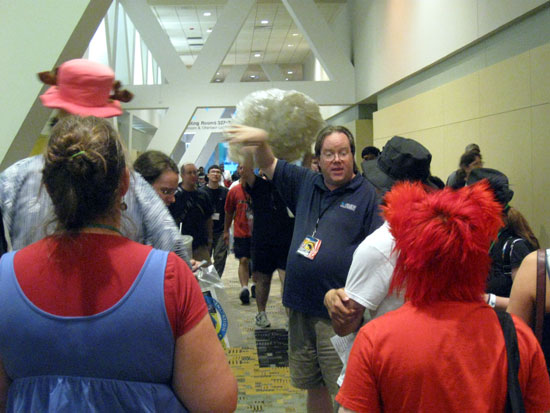 As The Dormouse explains things for the gofers, you can see someone
bringing a large ball of used tape. The tape, we discovered,
was not cleared for use for making lines, since the brand we had used was discontinued. 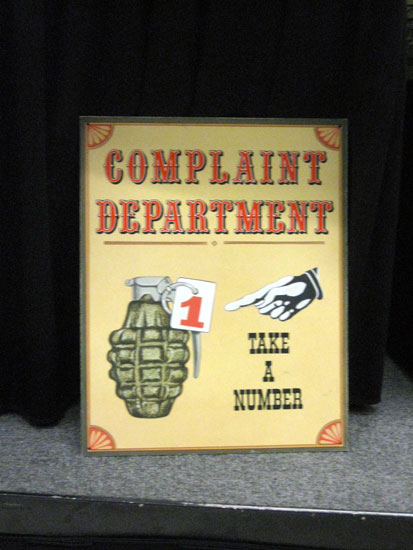 A sign in Spec Ops says, "Complaint Department, Take a Number,"
with the No. 1 affixed to a grenade. Um... yeah. 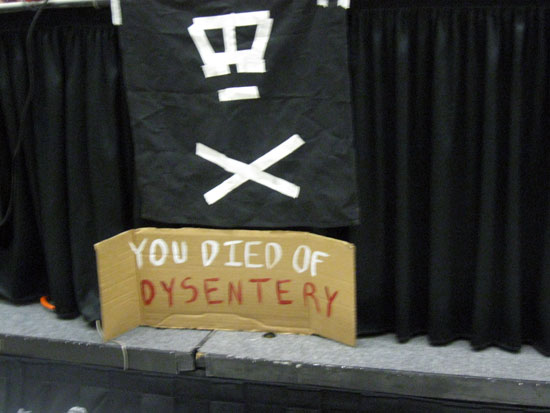 Another Spec Ops sign shows a skull and crossbones and reads "You died of dysentery."
No doubt, it's a video game reference. 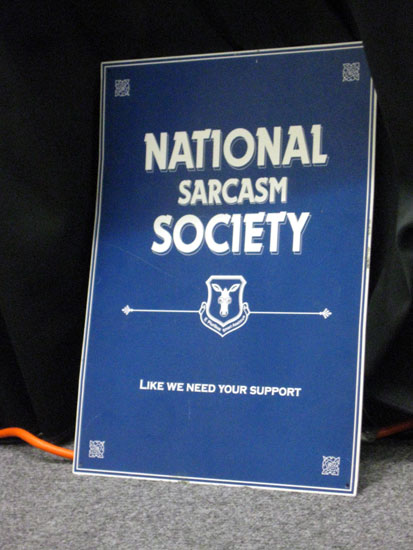 Yet another sign in Spec Ops reads "National Sarcasm Society: Like We Need Your Support."
Shouldn't that be, "We REALLY need your support"? 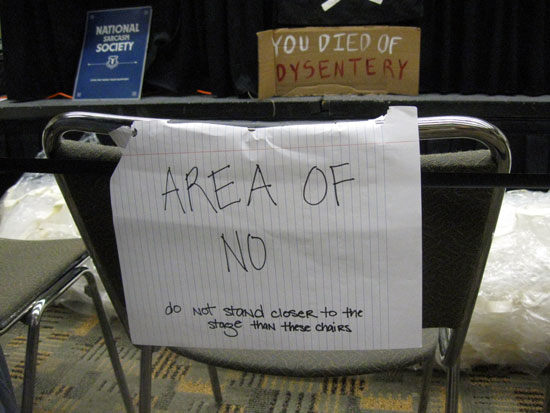 A handmade sign affixed to a chair in the middle of a barrier in Spec Ops
reads "Area of No: Do not stand closer to the stage than these chairs."
This kept people back from the main raised area that
serves as the Spec Ops operational center. 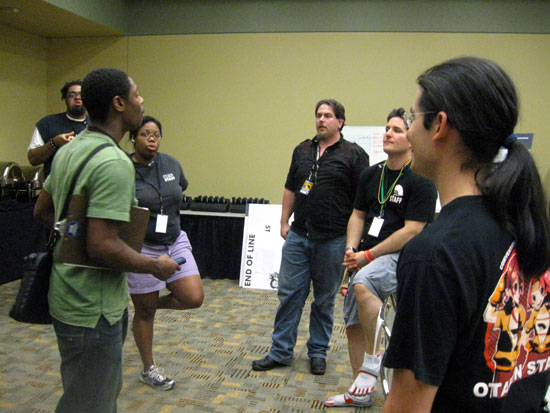 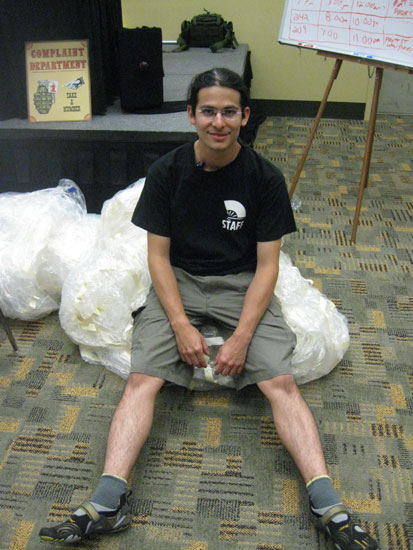 A Spec Ops staffer uses some of the used tape as
an impromptu beanbag chair. 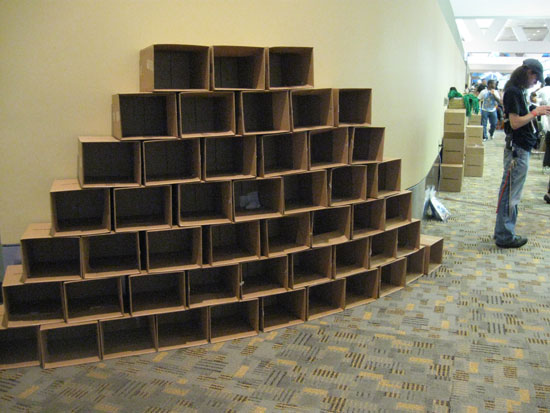 KFP shows off his badge to the Mad Hatter. 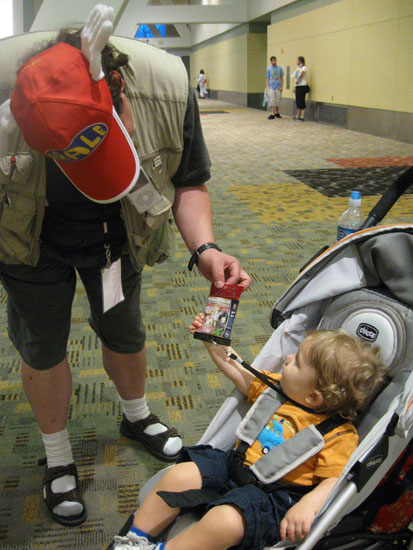 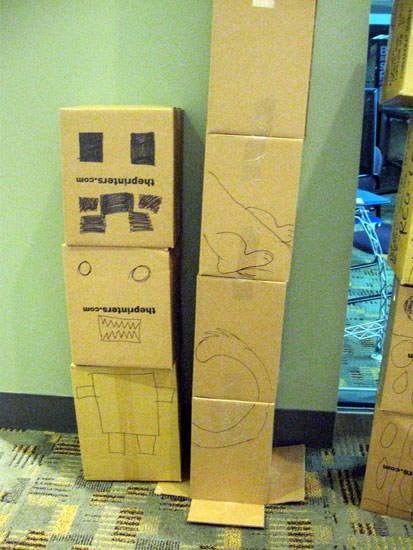 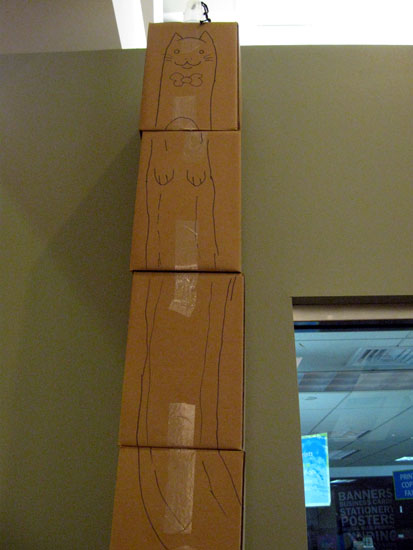 More box art of either an elongated cat or a ferret. 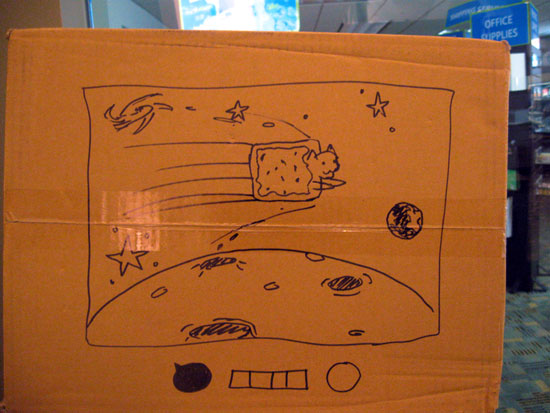 More box art: a happy-looking cat in a simple ship, sailing over a moon. 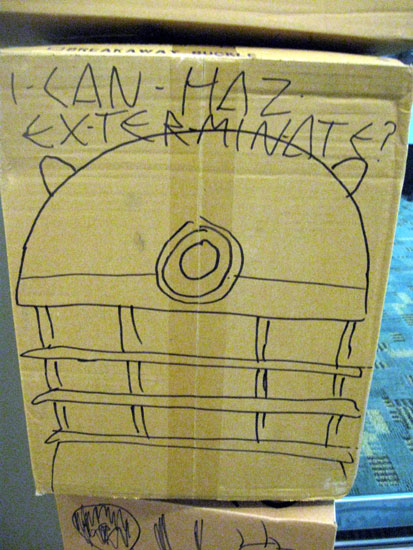 On the top of a drawing of a dalek from "Dr. Who,"
it reads "I can haz exterminate?" 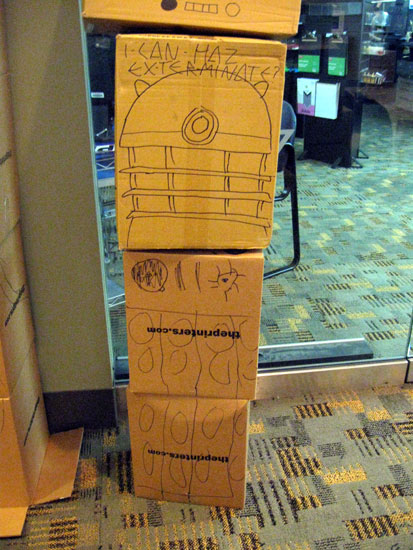 More box art: a dalek from Dr. Who, formed out of
three separate empty boxes. 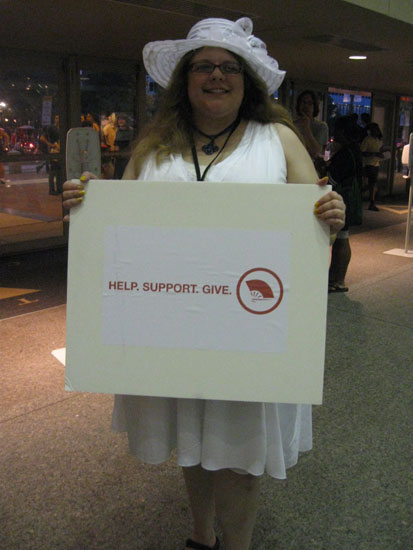 An Otakon staffer in a white halter dress and pretty white hat
holds a sign asking people to give to a campaign
to help tsunami victims in Japan.

This would be the only night I got a lot of pictures of Otakon other than in my own area of Press Ops, mostly because of all the time I spent off-site, visiting friends and such.

Moral:
You don't get to see much of the convention if you're not actually at it.