therealljidol. I invite you to read and vote for the many fine entries. This week's topic is "Open Topic," meaning we can write about anything


Loose bricks wobble under me as I perch in a basement alcove in Edgar Allan Poe's home on Spring Garden Street, Philadelphia. Afternoon light slants through the small window. This sparse, unfinished basement has an unwholesome air about it.

"Smile," my friend Connie tells me, and I look at the camera. We are shooting a project for her photography class. The assignment: an environmental portrait illustrating the profession of the subject (writer and poet). Shooting at the Edgar Allan Poe house was my idea; the alcove was hers.

Later, when the film is developed, a red and yellow aura surrounds me. Practical Connie, 20 years my senior, insists the streaks came from the window light. 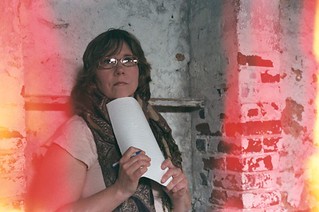 A red and yellow aura surrounds me as I clutch papers
thoughtfully in an alcove in the basement
of the Edgar Allan Poe House in Philadelphia. 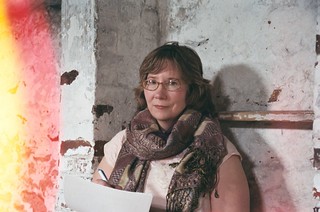 A red and yellow streak is to the left of my face
as I look up from writing on some paper. 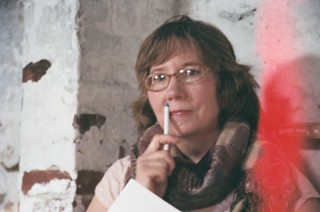 A red streak is to my right as I touch
a pen thoughtfully to my face.

From two floors up, his wife's labored breathing haunted Edgar. She had retired early, to lie on a hard bed and stare out the window until sleep overcame her.

On a pretense of gathering flour for his mother-in-law, he had retreated to the basement. But he ignored the shelves lined with dwindling supplies. Instead, he stuck his hand into the alcove formed by the half-undone false chimney. He seized a black bag and pulled from it a flask.

As he drank, he noted how the bricks had been pulled down from the false wall, as if someone had broken into it with haste. Since he rented this rowhouse, he had no idea of its history, but he imagined the false receptacle had once housed macabre secrets.

A second swig. Upstairs a cough. He turned his gaze towards the stairs, listening for her voice. If she should call, he could be at her side in seconds. Nothing more. He walked slowly towards the afternoon light slanting in the window. Gazing out, he let the dark thoughts grow. As long as he could expel them through writing, he could render them all safe.

With a last swig, he crossed to return his secret to its tomb. In the gloom, he thought he saw the outline of a figure, sitting in the alcove. "Hello?" he spoke. Nothing.

Something brushed his leg, and he dropped the metal flask with a clank. The creature offered a plaintive mew. It was only his tortoiseshell cat, Cattarina.


Connie and I take photos in nearly every room. She is enamored of the life-sized canvas prints, with their two-dimensional furniture, designed to show how the house might have been used. Again and again, Connie poses me in front of these facades: pretending to write at a secretary, or reading in front of a false fireplace. I am fascinated, instead, by the bones of this house: empty and exposed, the peeling paint and pocked plaster speaks to me.

In Poe's study, I am overcome with grief. Connie chats happily as she sets up the camera. I interrupt: "It feels so sad up here."

"Because he's gone?" she asks.

"Well, smile anyway," she says. The window looks out on a straggly, dark tree, but I sit in front of the life-sized canvas print of Poe's desk. You can see the sadness in my eyes. 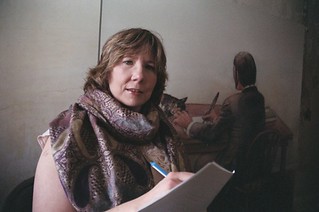 Me in front of the canvas depicting
Poe's writing desk, and his cat, Cattarina.

Elsewhere in the house, I pose before a life-sized canvas print depicting a table with some fruit. In the second such photo, I am in focus, but the table is blurred as if being yanked sideways (if such a phenomenon happened, neither of us saw). The following frames show only the blurred table. Connie offers no explanation. 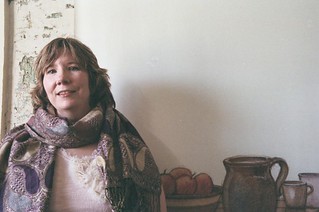 I am lit with soft natural light from the window just out of frame.
To my right is a life-sized still-life of a desk
with fruit and a water pitcher. 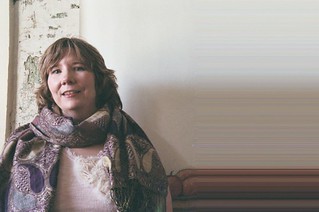 An unexplained streaking blurs the still-life next to me, but I am still in focus. 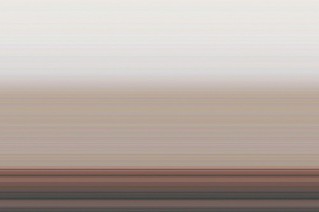 The table is a blurred streak; I am not in the photo. Camera error? 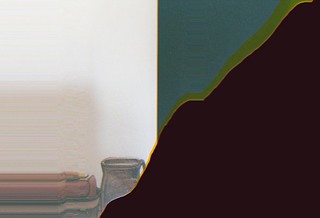 A streak fills the left side of the frame.
At the right is a pitcher and then a ragged, inky triangle.
This was also the end of the roll.


In his study, Edgar put pen to paper, but the words failed to come. He was aware, always, of his wife's labored breathing from the next room. The doctors had given him no explanation for her lingering illness but no hope, either. She'd alternately recovered and relapsed since two years ago, when she'd ruptured a blood vessel while singing. If he could only earn enough, he could increase her comfort.

Perhaps it had been a mistake to leave the editorship at Graham's to write full-time. Yet, now he was free to assist his mother-in-law with Virginia's care. On her best days, Virginia was the graceful bird he'd loved since she was a girl. On her worst, her pallor aged her decades beyond her scant years.

As he let the darkness in, he gazed at the young tree outside his window, the crown just now topping the windowsill. With a start, he saw a figure sitting near his desk, facing away, and for a moment, the walls seemed to flake and crumble. His wife's snoring grew louder and more sonorous to his confused ears, and he shook his head wildly from side to side until the phantom disappeared.


Among our last photos, we walk out to the lawn, where a statue of a raven stands on a pedestal. I feel as if a cloud has lifted, and I joke with Connie that she ought to examine these photos later for any ghosts. At my suggestion, she frames a shot so that the shadow of the raven statue lurks over my shoulder. In the bright late-afternoon sun, I can barely open my eyes. In the one shot where I succeed, my eyes look almost manic. This shot was Connie's favorite. 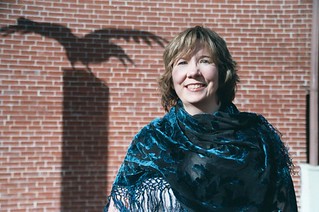 The shadow of a raven statue, on a brick wall, lurks over my shoulder.
I wear a black and teal velvet shawl.

Edgar walked outside to clear his head in the late afternoon air. Horses and carriages shuffled by at the southern tip of the lawn. Wearing black, he imagined he must be a shadowy figure, behind the tree and the ever-lengthening grass. He filled his lungs with the chilly spring air; a bouquet of cherry blossom and pollen and damp earth.

Was that a cry from the second story? He whipped around to glance at Virginia's window, his every nerve tuned for any small noise. No more. He let his gaze trail slowly down from the window, over the plain brick, and gasped. On the wall, he saw the shadow of a great black bird, where the young tree could not possibly have thrown it. He turned to look at the tree and found himself staring into the sun; if there was a bird there, he could not see. Turning back to the wall, he saw nothing but brick.

His mind was made up: he would pack up all their belongings and seek better fortunes for them all in New York. Perhaps, he could escape his demons and find, instead, some small heaven.

Edgar Allan Poe wrote many classic stories in Philadelphia, including "The Black Cat" and "The Fall of the House of Usher." It's difficult to tell exactly which home he was living in at the time, since he rented at least five different homes in his six years in the city. The Spring Garden home was his last Philadelphia residence and is the only one that remains. While "The Raven" was published shortly after his arrival in New York, many believe it was written in Philadelphia.

Sadly, Poe's wife died in 1847, just three years after leaving Philadelphia, and his quest for a literary backer never came to fruition. He died in 1849, on his way to meet with a would-be angel.

All photos are by Connie Komm and have been unaltered except for being scanned into the computer. You can click on each photo to see a larger version.