therealljidol. I invite you to read and vote for the many fine entries. This week's topic is "Walking on Egg Shells." 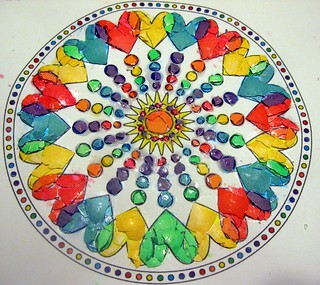 A mosaic made of colored eggshells on a white paper background.
First, there's an outer band of small colored dots in rainbow colors. Then there is a circle of interlocking hearts, with the bottoms inward. The hearts are red, yellow and blue, and where they intersect they make the secondary colors orange, green and purple. An array of four dots in gradually decreasing size leads to the center of the circle from each heart, following the rainbow colors starting with each heart (i.e. red heart, then orange, yellow, green, blue dots). At the center is a yellow starburst which has a small circle of red, purple, and yellow dots. At the very center is an orange circle. The mosaic was created on paper, colored with marker, and then the colored eggshells were carefully laid on top with clear Elmer's glue, which gives it a glistening, jewel-like look. Click on the photo to see it larger.

Shifting nervously in the plush upholstered dining chair, Emmett glanced once more towards the door. His father would be here soon. Holding the phone against his ear like a lifeline, Emmett wished the voice on the other end were sitting next to him.

"Khalil," he said, "Tell me again why this is important."

Soothingly, Khalil responded, "Because family support is an important factor in personal growth. And because truth, as hard as it may be, is the first step." Ever since he had met Khalil at the campus chapter of PFLAG, the two had grown close. Khalil, a tall guy with a cafe-au-lait complection and short dreds, had spent hours with Emmett, talking over coffee and helping him make sense of his emotions.

Emmett sighed and looked around the room. Of course, when he'd told his father that he wanted to go out to dinner together, just the two of them, his father had made reservations at the Carle Hotel. Everywhere Emmett looked evoked a memory: the piano player who had graciously placated him with children's songs when he was an antsy toddler; the corner where his dad had thrown him a graduation party; the fireplace where his dad had announced he was running for reelection, to remain State Rep. Corbin Hall for a fifth term.

With a sigh, Emmett said into the phone, "Why did I ask him to meet me at a restaurant? This place is filled with people he knows. He's going to freak out."

Khalil said, "It's less likely, since you're in a public place. And besides, this way you know your mom won't walk in."

His dad arrived and waved briskly. A dignified figure with his salt-and-pepper hair cut short, wearing an impeccably tailored suit, the elder Hall made his way slowly to the table, greeting friends and neighbors along the way.

"I've got to go," Emmett said. "I'll let you know how it goes." As he hung up, he hugged the package on his lap, for comfort.

Loud enough to be heard in the next county, his dad boomed, "Emmett! Have you grown in just four months? I sent a teenager to college, and I'm welcoming back a man." At his dad's urging, Emmett stood up and accepted a big bear hug. His father was always more effusive when voters were near, not that he was ever cold. But if they'd met at home, his father would have simply leaned over and tussled his hair and kissed his cheek, without all the pageantry.

That was exactly what made this conversation so difficult. Emmett knew how much of his father's life was invested in image. Having the perfect family was not a prerequisite for office, but it certainly helped. Many times, he had stood on the stage with his parents at mind-numbingly boring official events.

The waiter arrived, and while his father chatted with him, Emmett tried to still his nervous jitters by sipping on his water. The light-colored room, with its berber carpets and blonde wood accents, began to swim like a desert mirage. His father babbled on and on. "Can't you see I have something important to say?" Emmett wanted to yell.

As soon as their orders had been placed, Emmett swallowed heavily and, before someone else could interrupt, placed his gift on the table. With a bemused smile, his dad asked, "What's the occasion?"

"I made in one of my classes." Emmett was a Humanities student with an undeclared major and was enrolled in an Introduction to Art class.

His father unwrapped a small, framed art piece and gave it a quizzical look.

Emmett said, "It's a heart mandala, using every color in the rainbow. I made it out of eggshells."

Placing the piece gently on the table, his father regarded him with questioning eyes. "It's beautiful, Emmett. What does it mean to you?" That was a politician's way of asking, "Why did you give this to me?"

Breaking his father's gaze, Emmett stared at the phone in his hand, which for him represented Khalil's calm support. "I've been doing a lot of thinking, making sense of things that I always knew in the back of my mind but didn't want to admit. I don't know what I would have done if I hadn't had someone to talk to, but fortunately, I met a friend at PFLAG who helped me to cope with my feelings."

"PFLAG?" his father repeated, his voice dropping to nearly a whisper.

"Parents and Friends of Lesbians and..."

"I know," his dad said abruptly. "I am a state representative. Just what was it that your friend helped you make sense of?"

He was actually going to make him say it. Slowly, Emmett raised his eyes to meet his father's. "He helped me to make sense of you. Dad, I know. I know why things are strained between you and Mom, why she complains you don't kiss her enough. I know that you've put your feelings on a shelf for years because you thought it would be better for everyone involved."

His father opened his mouth as if to say something and, instead, began to tear up.

Leaning in closer, so he couldn't be overheard, Emmett said, "Dad, I know you're gay. And I also know why it's not easy for you to be open about it. I can't force you -- and I won't force you -- to do anything you can't do right now. But I just want you to know that I love you."

Emmett put his hand on his father's. "Hang this somewhere you can see it every day. In your office, or your bedroom or your kitchen. When you look at it, remember, no matter what else happens, you'll never lose me."

His father only nodded.

As the waiter brought their food, his father collected himself. To the waiter, he said, "I thought I wasn't going to cry until my kid got married some day. Who knew how emotional I'd get just seeing him home from school after four months?" He dabbed the last vestige of tears away.

The waiter responded that he, too, had a son in college and that it was hard to be apart from him. The two began chatting about college loans and his father's views on state funding of education.

Emmett took the opportunity to text Khalil: "I did it! Fill you in next mtg. Thanks 4 everything."

The piece above is fiction. Any resemblance to real persons is completely coincidental, although there are many people who, for their own reasons, choose to remain closeted.

unmowngrass for encouraging me to write a fiction piece this week.