therealljidol. I invite you to read the many fine entries. This week we have six topics. This is my response to the topic "Waking Dream." 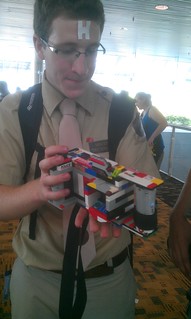 This cosplayer, dressed as Rimmer from "Red Dwarf,"
shows off the LEGO phone he built to house his camera phone.
It even had a hinged side for easy removal of the phone.

Walk through the shifting halls of Otakon on this year or any other, and you may find yourself strolling amongst steam-punk soldiers, a kiss of vampires, Disney princesses, or odd gap-mouthed frogs. You might spy a witch checking her face in a compact, or an exhausted samurai lugging an overflowing bag out of the Dealers' Room. Someone may be a faerie one moment and a demon goddess the next. At night, that same beast may remove her horns and face paint to become, once more, a conventional 17-year-old girl. A young man who transforms into a martial artist with strange chunky hair one day may, on the next, become a hologram holding a LEGO camera.

Otakon is a rarified world, where robots rub elbows with unicorns and where it's not unusual for a cat-girl and a pirate to walk hand-in-hand. Last night, my 2-year-old son, whom I've nicknamed Kung Fu Panda, befriended a 6-year-old pink fox. They crawled around on the floor before ducking into her den under a draped table, where I could hear her lilting voice babbling like a forest brook.

I suppose, to some, it would seem odd to watch your toddler lured away by a fox spirit. But here, it seems ordinary, and besides, I know her father. Like me, he has staffed this convention for years; in fact, he is one of the Four Fathers, the loving nickname bestowed upon the four Penn State alumni who attended an anime convention in the mid-'90s, which inspired them to make the legendary statement, "We can do better."

Now, nearly 20 years later, his short-cropped hair turning a distinguished salt-and-pepper, my friend The Laughing Man still works the convention. Nowadays, his son and oldest daughter are at his side: the boy dressed as a straw-hat wearing pirate. His daughter wears her own creation, consisting of a pink dress, tail, and matching ears, her whiskers drawn on with face paint. At my request, they accompany my son and I to the Photo Suite, where the couple who run it -- old friends of ours -- offer us an after-hours photo shoot of our children. As the kids cavort in front of the photographer, we all swap child-rearing stories.

It's funny sometimes, in a dream-like land of never-ending childhood, to be one of the adults. But that is the destiny of a staff member. We are the wizards behind the curtain, orchestrating the magic. We procure contracts and meeting space. We greet the guests at the airport at 3 a.m. when their flights are delayed. We reunite weeping children with frantic parents. We police the hallways so that no one is impaled by a spontaneous mock swordfight, and if the worst should happen, we also handle crowd control and make certain the first responders are alerted.

In my specific department, Press Relations, we serve as intermediaries between the press and the convention guests. We answer questions, arrange interviews, and facilitate those interviews to make the experience as productive and pleasant as possible for everyone concerned. When things go wrong -- when guests run late or a photographer is stuck in traffic -- we scramble to get everything back on track.

All over the Baltimore Convention Center, roughly 500 of us staffers work to lessen nightmares. We are the dream shamans, converting bad to good. We step up so that thousands of others can step out in satin ballgowns and bright purple suits.

As The Laughing Man and I watched our children ham it up for the snapping lens, I felt certain that 20 years from now, they too will keep the dream alive.

Thanks to my beta reader,

roina_arwen, for looking over this for me and making terrific editing suggestions!