This is one of my entries this week for

therealljidol. I invite you to read and vote for the many fine entries. This week we're writing on several topic; this addresses the topic "Visiting Hours."


After the evening feeding, the sharks swam laps in their tanks, which looped through the Baltimore Aquarium. Turtles and frogs munched leftover crickets. Dolphins played leisurely underwater games. But something was different this Sunday night. People in white chef's jackets breezed past the tanks, setting up tall tables draped with long white cloths. The people laid out silver warmer trays along with stacks of cups and plates. They uncorked bottles of colorful liquids.

To most of the fish, it was simply a blur of movement, notable only because it came at a normally quiet time.

The rays felt it first: a rumble of hundreds of bipeds approaching. Undulating rapidly, the rays circulated through their massive open-air tank, which made up the central portion of the aquarium.

In the evening hours the humans usually disappear, with the exception of the occasional solitary watchman. Now, a tide of people swept in. Many of them wore black shirts bearing white letters that, if fish could read, they would know said "OTAKON STAFF." Others wore a wide variety of colorful ensembles, likely designed to attract mates and indicate their importance to the other humans.

To most of the fish, this people parade meant little. The rays wavered around the edges of their habitat, drawn by voices and wondering if the petting pool would be reopened. The sharks dashed wildly by, eyeing the arrivals for signs of danger, or perhaps for anyone in scuba suits, proffering meat.

An alligator, half out of his water, remained unimpressed.

The seahorses noticed nothing, since their tanks were made of one-way mirrors. They bounced up and down, making sweet faces at the handsome honeys they saw reflected within, pondering the intriguing human-like noises.

The dolphins invited the unexpected viewers into their nighttime play, sweeping up from the floor of their tank, spinning and showing their bellies to amazed and appreciative eyes. An impromptu ballet, choreographed by a troupe of graceful gray dancers.

As the fish watched, people lifted drinks to their mouths and munched on plant food and chicken (no seafood, thankfully).

Into the wee hours, on this exceptional day, the aquarium's residents stayed up late to watch the people watching them. 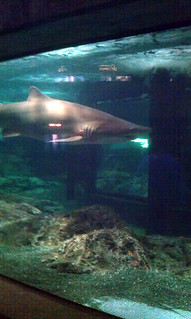 A shark in a narrow tank gives us the eye. 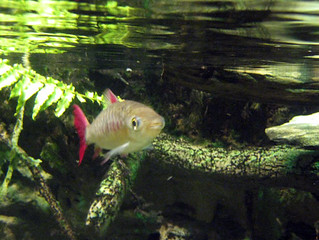 A small buff-colored fish with bright pink fins swims through
a green forest habit, swimming right towards the camera. 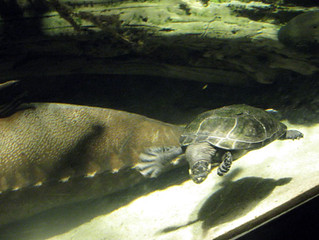 Swimming past a submerged log and a giant catfish,
a turtle peers curiously out of his tank. 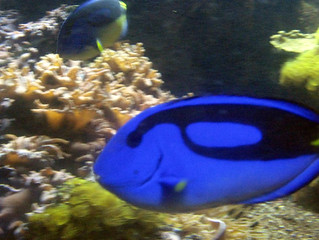 A bright-blue fish with black stripes turns one sideways eye
towards the front of the tank. 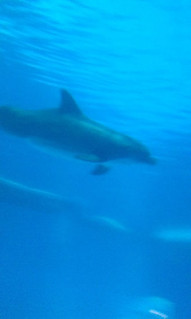 A dolphin in the foreground swims at a slight downward angle
while background dolphins swim in a dance line.


This was inspired by the traditional wrap party for Otakon staff known as Dead Dog, this year held at the Baltimore Aquarium.

roina_arwen, for her astute editing suggestions.