This is one of my entries this week for

therealljidol. I invite you to read and vote for the many fine entries. This week we're writing on several topic; this addresses the topic "Artifice." 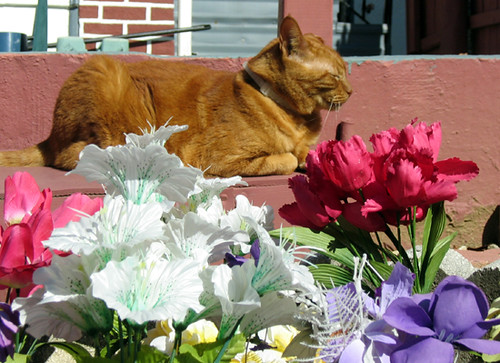 An orange tabby cat relaxes in an artificial garden.

Exploring our new neighborhood about six years ago with my then-constant companion, my affectionate dog, Una, she poked her snout through the slats between a wooden fence that, strangely, was painted barn-red. Inside, to her delight, Una discovered an orange tabby cat, reclining on a concrete step covered with green felt, like the kind you find on mini-golf courses.

As Una sniffed loudly, trying to force her entire nose through the fence, I made a discovery. The garden, I realized, consisted of plastic blooms in bright colors, lovingly "planted" in real dirt. The fence was much higher than seemed necessary for such a small yard (four feet square, if that). The slats were so close together you could barely see through it. Other than the cat's step, there was no place to sit and enjoy this plastic refuge, and since the fence surrounded it on four sides, it was also hidden from the house. A curious space, indeed.

When I told my husband about the discovery, he agreed it was odd but suggested that somebody was looking for a low-maintenance solution to add some color to the yard.

But why, I wondered, would you grow an artificial garden that nobody could see? Did it exist only for the cat's amusement? Or was it an alien's off-kilter idea of how to blend into suburbia? The garden became a great source of amusement for Una and me, who poked our noses through the fence to see what we could see. Often, the cat sunned itself on the felt-covered step, purring loudly enough for us to hear.

A few weeks later, I met the artificial gardener. He was painting the sidewalk with sealant, laying it on heavy over the few spidery cracks. I learned his name was Carl, which immediately reminded me of the crochety old man from the animated gem "Up." This Carl, however, was a jovial, spry man with bright white hair. He was hard of hearing, or merely selective when it came to answering questions. While I couldn't get up the nerve to ask about the garden, I did learn that the cat was not his. So the secret plastic garden was not, apparently, designed to keep his cat happy.

This Spring, as the snow melted, the faded flowers from the previous year remained a-kilter. The fence, faded to pink, was beginning to fall down. The sidewalk had not been painted. By the time I realized it, I had no idea how long these changes had been taking place. I chalked it up to a mother's distraction, along with the fact that my walks have grown sporadic, since Una passed the Rainbow Bridge a year and a half ago. These days I walk to clear my head and lull my active toddler into sleep.

Fearing the worst, I deduced that, like so many other elderly neighbors, Carl had either moved to a senior citizen home or flown a plastic balloon to the Pearly Gates. There, he'd pot plastic ferns to line Heaven's antechambers. Inwardly, I mourned. I saw the cat, wandering the neighborhood, its tail twitching.

Then, one afternoon, returning from a stroll with my son, I smelled sealant. As if nothing had ever happened, Carl was kneeling on the pavement, brush in hand. He wore brand-new jeans and a white polo shirt, and he greeted me warmly. Upon my professing that I'd been worried about him, he waved the concerns away. "I'm fine," he told me. Nothing else.

Perhaps he was in the hospital. Or maybe he spent an extended visit with family. Maybe he had to check in with the overlords, to report what he'd learned about the humans he's been watching. Whatever the reason, he has revived his garden. Once more, plastic blooms decorate a lawn I've just realized is really cement painted green. Curiouser and curiouser.

ETA: I just managed to find my best pic of the garden from about four years ago in response to a comment below, so I've added it as an illustration. He added felt to the step since this picture was taken. The fence isn't visible, since I took this photo through a gap between the slats, and there's a three-inch gap between the top of the steps and the upper portion of fence, though one of the fence posts is visible, painted red, in the background.