Celebrating the Answer to the Meaning of Life

A long, long time ago, before the earth had cooled (or something) I used to write personal posts on my LJ. Now is as good a time as any to start up again, since I had a very nice birthday weekend.

The day began with me getting the rare opportunity to sleep in, since the next session of KFP's Water Babies class doesn't start until next weekend. Then my sweet little boy gave me a birthday card he'd signed (purchased by The Gryphon, of course, who'd given me his card the night before). The Gryphon told me his gift to me will be more memory for my Dell Inspiron netbook, which he has to order online. Yay, I definitely need it; I keep way too many tabs open!

Although it might not sound like much fun, the day began with The Gryphon and I getting our hair cut, at Salon Addora in Glen Mills, where my stylist, Maria, always does a terrific job. She read my mind and suggested that maybe we grow it out a little and try something different. I've been wanting a change lately but didn't know what to suggest.

We took turns getting our hair cut so that someone was available to watch KFP. He entertained himself by playing with the truck I keep in the diaper bag. In addition, he tried out some of the sugar cookies they had at the courtesy station. Everyone always tells us what a good boy he is when we're there, but the truth is that he's very social and enjoys getting out and about.

Afterward, we checked out a little across the road, Newlin Mill Park, which features some historic farm buildings as well as a little waterfall, a slow-running creek, and a grassy path wide enough to walk along holding KFP's hand. We were only there for a short while, walking for about 1.5 miles, but it's apparently much larger. Definitely a place to visit again. 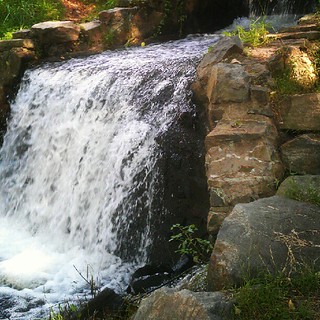 The little waterfall, which is surrounded by rough-cut rocks. 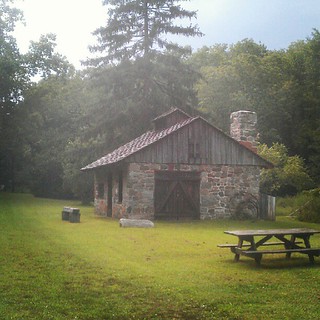 A rustic building on mowed grass, surrounded by trees.

Dark clouds began rolling in, so we left the park and headed for an early dinner at another suggestion from Maria, the Italian family restaurant, Il Granaio. By the time we got there, the first drops of rain were falling, which was amazingly not enough to wake up KFP, who not only slept on me as we were being seated but slept through most of the meal. The wait staff thought this was adorable, and when he woke up during dessert and smiled happily at our waiter, saying, "Hello," a few other employees came by to say hi.

The food, by the way, was delicious. I had the Gamberetti E Pepe, which consisted of rock shrimp and fresh sliced zucchini tossed with homemade black pepper shell pasta, garlic, olive oil and parmigan cheese. It was a nice combination of a little bit of kick from the pasta along with the fresh taste of zucchini and shrimp. We also shared a serving of spinach, which was fluffy with hints of olive oil and garlic. For dessert, we shared the tiramisu, which was light and creamy, made with mascarpone and served in a coffee cup.

The rain didn't really pick up until we were almost home, and it was actually kind of pleasant, as we watched the new episode of "Dr. Who."