On Saturday, The Gryphon and I attended a barbecue held by a friend of his who had invited us to her birthday party last summer. She and her husband, a Massage Therapist, were celebrating the recently completed renovations to their home.

We also had other plans that day, because The Court Wizard was in town. The Cheshire Cat and The Paper had invited people to meet at their house at 5 to order some takeout and then play the role-playing game The Cheshire Cat wrote, Confed. 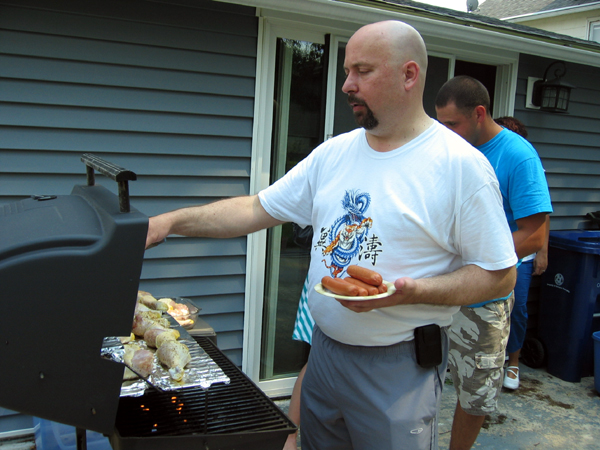 The Massage Therapist at the grill

The barbecue was supposed to start about noon. We were slow getting out the door, so we arrived at about 1:30. The Massage Therapist was in the side yard, rinsing out coolers. The first thing he said when he saw me was, "You're blonde!"

I didn't realize that when we last saw him my hair was that different in color. Of course, I'm still in denial about the fact that I'm no longer a natural blonde and only achieve proximity to that shade through the skills of my hair dresser. "Highlights," I said, simply.

Several people had already arrived, and the island in the kitchen was covered with snack food such as pretzels and chips, as well as a crock pot full of meatballs, along with buns. As soon as I brought in our veggie tray, someone opened it, and people began to dip in. It's kind of funny that most people bring chips and pretzels to parties, and yet they demolish the veggie tray as soon as one arrives! I guess nobody considers it "party food," but they're much happier eating something healthy than filling up on chips.

Eventually, more food arrived, including some homemade zucchini bread, homemade chocolate chip cookies, a delicious fruit salad loaded with blueberries. I sampled some of the bread and a couple cookies, but mostly ate tons of fruits and veggies. We'd had a big breakfast, and I knew we'd be eating dinner with friends in a short while, at The Cheshire Cat and The Paper's place.

I recognized a lot of the guests from the party last summer, and they recognized me, as well. For the relatively short time we were there, I had a good time talking with people on a variety of topics. I got into a very animated discussion about training pets with The Knitter, who is a fellow member of Philadelphia Area Gaming Enthusiasts (PAGE) and an avid knitter. She was arguing with another guest about the efficacy of the Dog Whisperer, Cesar Milan's, training techniques. 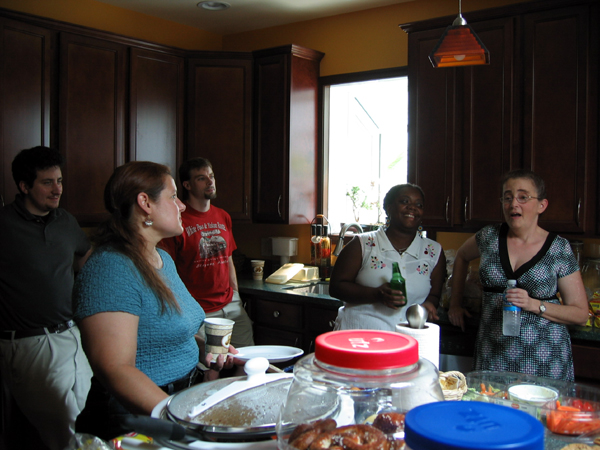 The hostess (far right) with some party guests

For a while I got into an entertaining conversation about makeup and fashion, with a number of men asserting that they don't like women to wear too much makeup. This led to my observation that geeky guys often seem to pair up with hippie chicks. I drew The Gryphon to me and said that we were a good example of that. The guest I was talking to asked me, "But are you the geek or the hippie?" I told her I'm both. 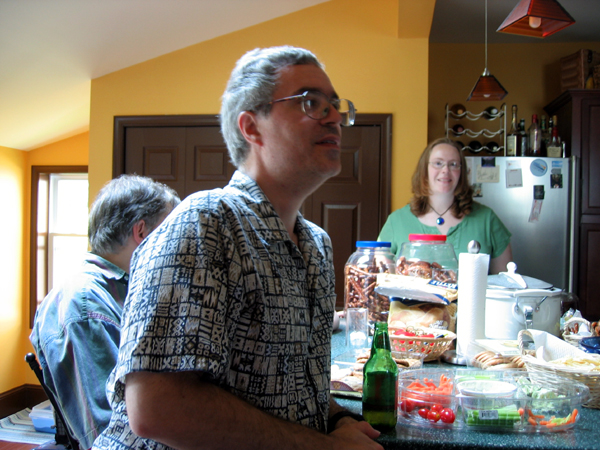 The Gryphon socializes in the kitchen

Eventually, the hostess invited everyone to take a tour of the house to see the work they'd done. The most obvious change was probably in the kitchen, where they'd knocked down a wall, added a skylight, and replaced all the cabinets, counters and appliances. Work was evident in the other rooms, though, which had all been repainted, and some refloored.

One of the nicest rooms was the bedroom, which has a very luxurious feel. It has deep purple walls with red and yellow gauzy curtains and those same rich colors used for the coverlet and the carpet. It ends up looking like a royal Persian bed chamber.

Just as we were returning from the tour, Dr. DJ arrived with his wife. I talked to them out back about property values, since they just bought their own house recently. Dr. DJ drifted inside to talk to The Gryphon, and I spoke to his wife on the back patio about how we both hang onto books even when we're not using them until we finally find another home for them. She told me she'd had a book on macrobiotic cooking, which she wasn't using, given to her by another friend who hadn't used it! That got us talking about healthy eating and cooking.

I wondered afterwards if I'd gotten a little too enthusiastic about the subject. I try not to proselytize, but eating healthy foods has made a big difference to me. Today, I'm a lot healthier than when I was eating nothing but frozen dinners and indulging in too many high-fat, sugary snacks.

Just as we were about to leave, I discovered that a guest was in the back room, making balloon creations. He was the same person who had been making balloon hats at the hostess's birthday party last summer. 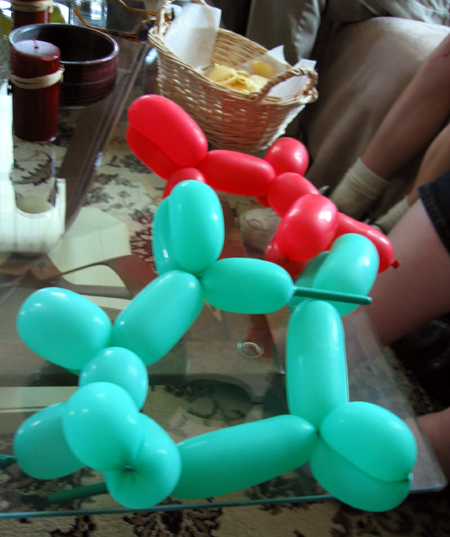 "I remember you now," I said. "You're the guy who does the balloons."

"Just call me Balloon Guy," he said. He was working on an extravagant Mickey Mouse balloon, and I exclaimed that it was fantastic. "You can have it," he offered. I readily agreed, knowing he would probably make balloon creations just as impressive for anyone else who asked. I watched as he completed the balloon, and then I thanked him. 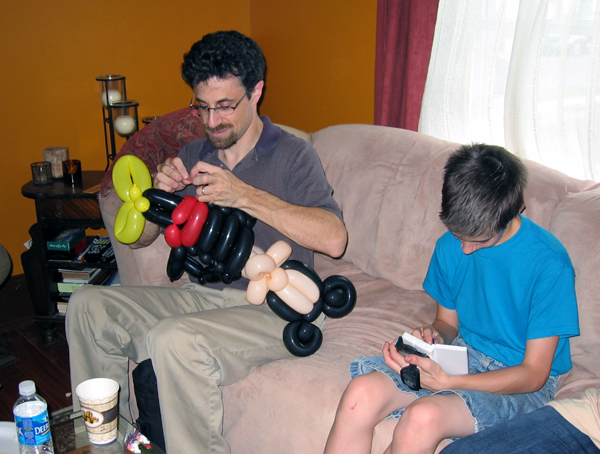 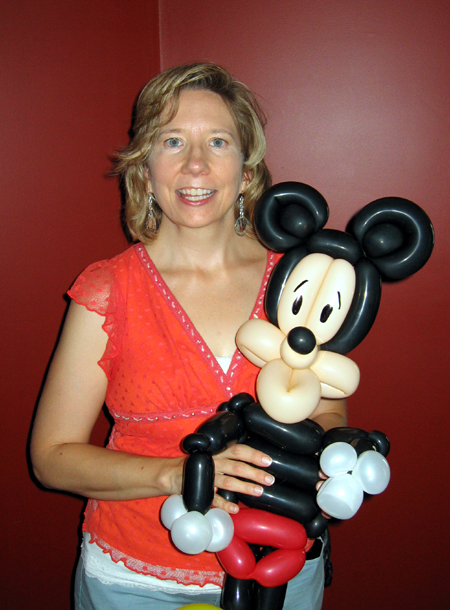 I paused for a picture with my new friend before The Gryphon and I said our good-byes to our host and hostess, as Mickey accompanied us to our next destination.

Moral:
I'm the only one who still thinks I'm a blonde.