From PA to (Near) Peoria

Despite all obstacles -- starting with funding (thanks, generous friends!) and ending with nasty Illinois weather -- we have safely made it to our destination. The Ringbearer is officially in Illinois! 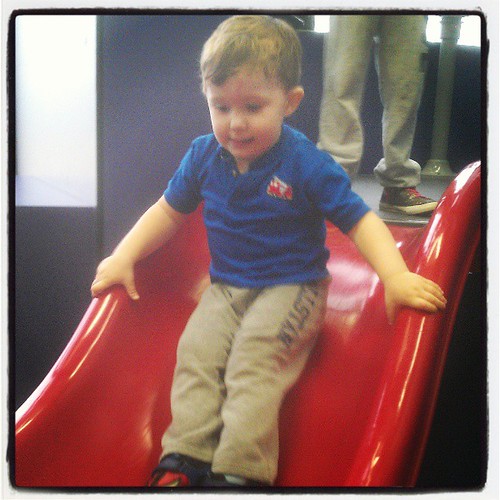 I'm working on a longer essay which will be included in "Now with Kung-Fu Action Grip," the ebook I'm writing that will include poetry and essays on parenting, plus highlights of our trip. (It's not too late to get one, if you want. Just donate using the button below.) For now, the easiest way to share our experiences is to talk about what I've learned from yesterday's journey.

1) Know your kid and act accordingly. If I'd followed this simple rule, I would have realized that playing in the "Aviation Play Station" at the Philly airport would result in half an hour of fun and hours of negative consequences. A social, active little guy, KFP has always thrown himself into playground fun, instantly making new friends. But it's also notoriously difficult to get him to leave when the time is up, and he has often cried all the way home. While he's been getting better with this, typically it's been with places that he's been before and has reason to believe will get to visit again. It's always rough to get him to leave exciting, new places. So while we had a blissful 30-minute respite, with him befriending a boy about his age and running around together, alternately going down the control-tower shaped slide and being co-pilots in the kid-sized plane; and while he cheerfully bid little Colin good-bye when Colin's family left; he did not go easily when I informed him it was our time to go, as well. Maybe things would have gone better if we'd left with Colin, but he'd had enough time in those five minutes to begin playing with two little girls, both dressed in old-fashioned dresses that made me think they were time-traveling from the 1950s. He did not want to leave, and no amount of reasoning and kisses could make him feel better.

As a result, I ended up carrying him to the gate, where passengers were already lining up. Momentarily placated though he was, he demanded water as soon as we got on the plane. I'd brought his sippy cup empty through security and hadn't realized I'd be allowed to bring a water bottle on the plane, provided that I bought it at the airport. He couldn't understand that he'd have to wait until we were in the air and the flight attendant brought drinks. Fortunately, the woman sitting next to us generously gave us the water bottle she'd just purchased for herself. It helped to calm him briefly.

But starting your first plane ride in a bad mood bodes ill. Suffice it to say he did NOT have a good time and ended up spitting up his water all over himself during turbulence, soaking his shirt and pants. I sought in vain for an air sickness bag in the seat pocket in front of us. Perhaps they were used and not replaced? Fortunately, I had an emergency set of clean clothes in the diaper bag, and after a change and plenty of soothing, we started the day anew. 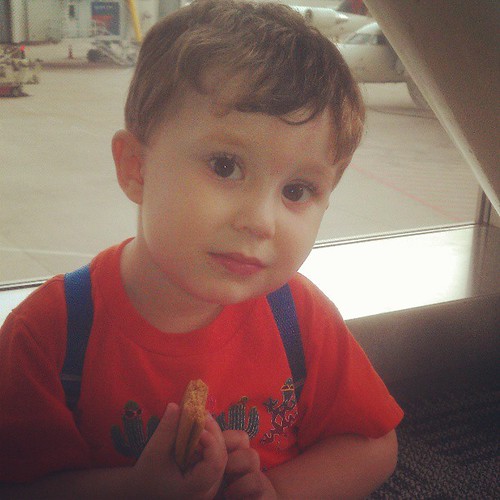 KFP, having a snack at Detroit Airport

2) Be prepared but more importantly, be flexible. How could I know that my son would remember that I'd packed a specific sticker book in the diaper bag and request that book during our flight? Unfortunately, that particular bag, and therefore the book, was in the overhead bin and inaccessible at that moment. I tried to occupy him with the accessible toys in his backpack and my laptop and finally managed to interest him in a little train coloring book by telling him stories about the pictures. Right then, a woman in the seat ahead of me turned around and, in a beautifully gentle voice, said, "My daughter wants you to have this." She handed my son an elegant paper crane made out of aqua paper with little flowers and butterflies on it. He was delighted, and all sobbing (and cried of "I want to go home") immediately ceased. The lesson here: even when you think you're prepared, there will be moments you don't anticipate. Be open to new solutions. 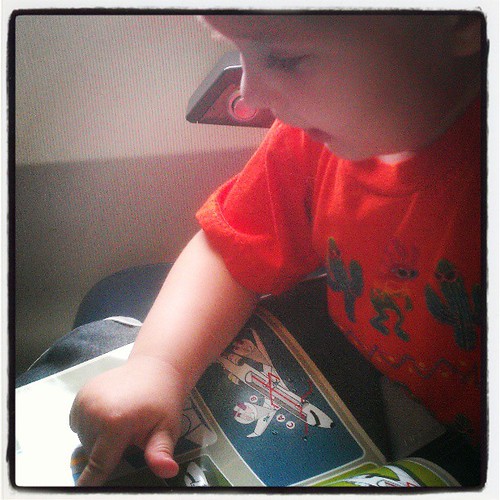 3) Be resilient. You'd think that after such a bad first leg of the journey, KFP would want to throw in the towel. But even though the Detroit Airport looked so much like the one in Philadelphia that he initially rejoiced at being "home," he surprising didn't burst into tears at being told that we were in Detroit and had another plane to catch. Maybe it was because he enjoyed the beautiful light-and-music display in the tunnel between terminals. Maybe it was because he loved the moving sidewalks, or the fact that in between them, Mommy picked him up and walked briskly. Or maybe it was because of how excited I made my voice when I pointed out our next plane, visible out the window, and we got to watch the luggage get loaded aboard and the techs check the engines. Maybe it was because, during our lengthy rain delay, we played with the very sticker book he'd wanted earlier. Maybe it was because, while we taxied on the runway, 30th in line to take off, he and I sang familiar children's songs, like "Itsy Bitsy Spider" and "Wheels on the Bus." Maybe it was because the plane was smaller and therefore the window next to his seat easier to see out and watch the other planes. Maybe it was because his tummy felt better after eating a little at the airport. Maybe it was the way I stroked his hair as we took off, and the fact that we both exclaimed, "Whee!" as we went airborne. Maybe it was some combination of getting so many things right, even though earlier so many things had gone wrong. But this time, before the plane had even leveled off, he'd fallen asleep! 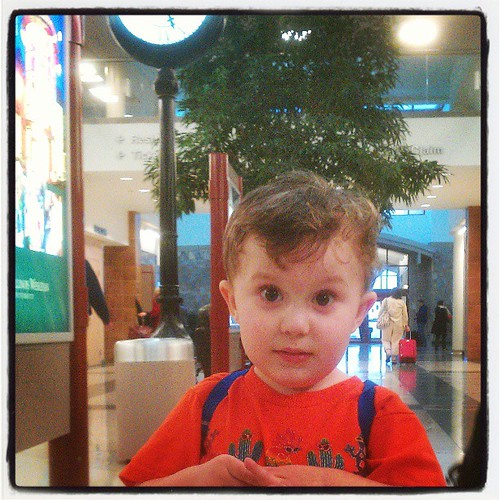 KFP, tired but in good spirits, in Bloomington Airport

4) Be honest. There were times, before we boarded the second plane, when I wondered if I should fib about the fact that we were going on another plane. (Of course, that would have blown up in my face the minute we boarded.) There were moments when I struggled with whether to tell him that, contrary to his belief that Daddy would be joining up with us, he was staying at home. But I've always tried to be as honest as possible with KFP about future plans and more. So I told him the truth: Daddy was staying at home, and we were going to be here for a few days. But I also spent time in the hotel room, after we ate, looking up things for us to do between our wedding duties. And I made sure we got to bed early enough to act on those plans. So now, without further adieu, it's off on day two!

Donate any amount and receive a special limited-edition ebook, available as a PDF in May, titled "Now with Kung-Fu Action Grip." It will include poetry, essays and humor pieces about pregnancy, parenting and my creative, determined toddler, nicknamed Kung Fu Panda. Proceeds will go towards defraying the travel expenses for our trip to Illinois, where KFP will be a ringbearer in the wedding of a couple we regard as family. Help us make this the best trip of KFP's young life!

To donate by check or money order, please make it payable to "Alyce Wilson," include a note giving your e-mail address, and mail it to:

You can donate via Paypal (using a credit card if you prefer) using the button below. </i>