I am currently eating with the child fork I carry in my diaper bag, because I removed the "adult" plastic forks and knives before flying here, and the sweet woman in the deli remembered all of my special orders (such as leaving the cheese and dressing off my chicken-fruit-and-nut salad) but didn't point out to me that I had to grab my own cutlery.

A very quick update from yesterday's activities, before I have to get KFP ready for the wedding. 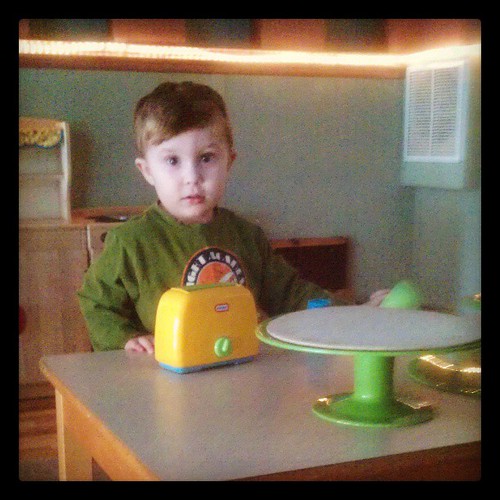 Yesterday morning, we managed to get our bags out to the car despite wind so blustery it knocked the luggage rack over (blowing away our free newspaper, which made KFP cry). Then I took him to the Orpheum Children's Science Museum in Champaign, which he loved but I thought was more like a series of play areas than anything with a scientific bent. They could easily fix this by including some signage explaining the concepts that children are supposed to learn from, say, playing with construction blocks or pouring sand onto a pinwheel.

Afterward, we ate at a lovely sushi place, Ko-Fusion, which advertises that it uses only organic and free-range meats. Terrific food, and the buffet was just $10 (free for KFP). Also, the Hostess managed to calm my crying son (who hadn't wanted to leave the science museum) by seating us next to the fish tank.

That evening was a bit of a minor disaster. First, the dinner was delayed due to wedding party and family members arriving late. KFP was doing fine at dinner until something made him cry, and after that he wouldn't eat. He did, however, love the Curious George books that the bride and groom gave him as his wedding party gift. In fact, he's happily studying them right now.

Since the rehearsal didn't get underway until about 9:30, it was already doomed from our perspective. He loudly declared, again and again, "I don't want to carry the pillow, Mommy." Finally, I got a brilliant idea: I pointed out the flower girl and told him that they both have very important jobs. As soon as he realized he wasn't the only kid involved, he was much happier. He asked me to walk with him, and I agreed. Fortunately, I'd thought ahead and purchased a nice semi-formal black dress so I would blend in with the men.

Back in our room, I read all four Curious George books to him, and then he fell asleep without a fight.

Wish us luck: the wedding is in an hour!