As I mentioned a short while ago, the air conditioner in Moondancer, my 2002 Ford Focus, has been getting progressively less efficient, to the point that it's just blowing warm air. I'd been putting off taking it to the shop, since it's such a hassle, but The Gryphon reminded me Otakon is coming up, which requires several hours in the car, both ways, during the hottest part of the summer. So I finally relented. 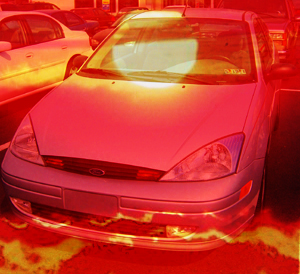 The problem developed so gradually I didn't realize what was happening. In the early part of the summer, I just blamed it on the exceptionally high heat and humidity. But recently, I gave The Paper a ride, who also owns a Focus, and she assured me this was not normal AC functioning.

I've also been putting off addressing a couple other items. One is some sort of a leak on the front driver's side. I've examined the liquid, which doesn't seem to be anything really scary. It's definitely not oil or gasoline. It's not green, which means it's not antifreeze. It's not red, so it's probably not power steering fluid. The Gryphon suggested it might be water dripping from a vent for the cooling system. However, you can be away for hours, and the puddle in the garage doesn't seem to dry up. Perhaps it is related to the functioning of the AC, like a leak in the system that would compromise the efficiency.

The third issue is that, over the last month or so, my car has begun to shudder a bit while it's idling, which it's never done in the past.

I called about these problems last night, right after the service department closed. The person who answered told me I could drop it off that evening using their drop box, but I didn't have anyone to drive me home and had to start work soon. So I decided, instead, to take it in the morning.

Knowing the shop opens at 7 but being dead to the world at that hour, I managed to animate myself around 8 a.m., throw on some clothes, let the dog out, and then drive to my local Ford dealership, where I have my car serviced.

The dealership has been expanding its services over the last year or so. They've become a general repair shop, boasting service seven days a week, with no appointments, dealing with all makes and models. When I pulled into the parking lot, the garage doors that used to lead to the service department were cordoned off with yellow caution tape, as the shop undergoes renovations. I entered through a small door which had a sign for the service department.

I was the only customer in the shop, although a number of people stood around in blue uniforms. Some were stationed at computers, while others, who seemed to be the mechanics, were discussing intake forms with them. One of the computer denizens looked up and asked if he could help me.

I explained the problems I was having, and he asked, "Do you have an appointment?" I told him no, and he looked decidedly put out. Then I added that the person I spoke to last night told me to just bring it in. He wanted to know what time I'd called, perhaps trying to determine if it was someone in the service department who had spoken to me or just the general receptionist. It seemed a bit odd that he was so concerned about appointments, considering the sign out front said they were unnecessary.

As I detailed the problems, he wore a very serious look, the kind that makes me nervous because it often precedes bad news. After I finished explaining and he'd taken notes, he said he'd have it looked at today. Once they knew what they were looking at, he could tell me whether the work could be completed that day.

I requested the shuttle service to get home. That's one of the great things about this shop. They have someone on their staff who drops customers at their homes while their cars are being serviced. They also pick customers up when the work is done.

The shuttle driver, however, was hard to locate, and the computer operator had to call a number of different people before tracking him down. Then he told me to have a seat and wait. I had thought ahead and brought something to read: a book I'm reviewing for Wild Violet.

Soon, the shuttle driver arrived, carrying a copy of the work order, which had my address. He introduced himself, and I recognized him from taking the shuttle before. He told me to follow him to the main reception area while he got the keys for the shuttle. The wait was longer than I expected, so I browsed the displays, including a 3D display on the new Ford 150. It includes actual parts, explaining the upgrades to the newest model. When I was done with that, I read some more.

Finally, the shuttle driver returned and apologized, saying he'd had trouble finding the keys. When we got in the van, he asked me the best way to go. I suggested an initial road to take, but I assumed that, having been that way before, he'd be able to find his way without help. That didn't turn out to be the case. We ended up driving through a more congested area than I would have recommended if I'd realized he needed more complete directions. But at last, he dropped me at my front door and told me he didn't know if it would be him or someone else picking me up later. That is, of course, provided the work gets done today.

Since I was still pretty tired, having stayed up late last night to watch an episode of Stargate, I lay down for a nap. I could have slept longer, except that our kitty, Luke, had his midmorning burst of energy. He was chewing loudly on plastic bags and making noise with his scratching toy. For a while, he even stood with his front paws on my stomach, as if to invite me to play. Our doggie and Una gave each other a weary look, yawned, and got up for a leisurely walk.

I always get a bit nervous when my car is in the garage. After all, sometimes you take it in for something simple and it's more complex (and expensive) than you anticipated. I can never rest easy until I know exactly what I'm dealing with. I'm not sure when I'll have answers; probably not until sometime this afternoon.

I haven't had too much trouble with Moondancer, other than standard maintenance. The only real issue I've had was when my CD player stopped working and had to be removed so it could be fixed. Hopefully, whatever they find will not involve a big repair, and we can once more be driving in cool comfort.

At about 2 p.m., I got a car from the garage which set my mind at ease. He told me that they recharged the freon in the air conditioner and checked for leaks, not finding any except for an almost imperceptible bit of dye in the compressor. He said that means it's probably not leaking and doesn't need to be replaced.

As far as the driver's side leak is concerned, the only possibility for that area, he said, would be a transmission vent valve, which can sometimes spill over if the transmission level is too high and the engine gets hot. They checked for leaks, finding none, and they also checked the level of the transmission fluid. It was full. They cleaned the vent valve, just in case there were blockages that had produced the liquid spill.

Finally, they tested the engine on idle and found no problems. I suggested that it might be related to the air conditioner laboring more because it hasn't been working efficiently. He said that's a possibility, since the air conditioner's compressor would be running constantly. But again, no immediate cause for concern. He agreed with me, though, that it was best to get these issues checked, just to be safe.

So the car is now done, and the shuttle service will be picking me up later this afternoon to pay for the repair and retrieve Moondancer. Huzzah!

Moral:
Even when they say appointments are not necessary, make one.