When last we left our hero, a boy of indeterminate age, whom I'll refer to as K., he had written and drawn about his life in a book called "My Very Own Drawing & Story Book 1." The boy is just beginning to read and write, often sounding out things phonetically. In previous pages, he wrote and drew frequently about his family.

Page 13 is pretty bland, consisting of a stick figure next to what seems to be an umbrella or a tree, with several large checkmarks. Obviously, just doodling. 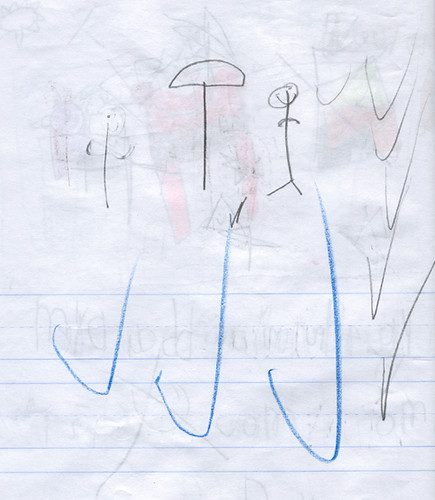 The next page features a happy looking drawing of a bigger person and a smaller person, next to a house with the sun in the sky and what appears to be a tree (or lamppost?) nearby. The text reads: "I gowni to my cozin in mi hapey in my mom is com in my sir is com." Based on my previous "translations" of K.'s writing, I'm guessing this says, "I'm going to my cousin's and I'm happy. And my Mom is coming and my sister is coming." 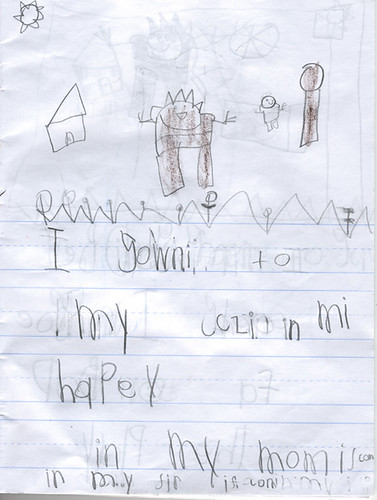 Next appears to be a drawing of somebody, presumably K., playing with what appears to be a basketball. It says, "I im Gad Be coel Im goe fa son Bod the play." If you read this out loud, it sort of sounds like someone with a speech impediment saying, "I am (going to be) cool. I'm going to find some body to play." 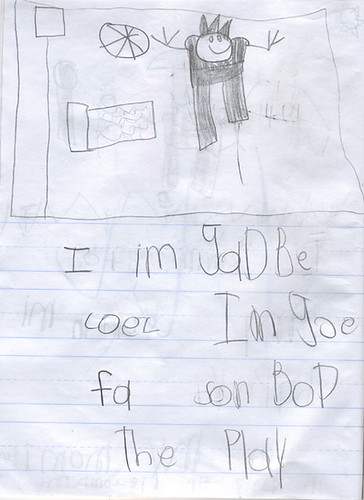 The next picture shows a very happy K., who might be dancing or perhaps walking on air, next to a little house with the sun in the sky. It says, "I im goein to gui ghiz." I'm really not certain what the last part means, so I'm guessing it's a proper name. To me, it sounds like, "I am going to (Googee's)."

I also find it interesting that, although he draws a lot of houses, this booklet was found in front of a business that had apartments above it. The booklet had fallen out of a number of bags left on the curb, apparently by a tenant who was moving out. As far as I can tell, K. didn't live in a house when he wrote this. Maybe "Googee" lives in a house, and that's one reason K. likes to visit. 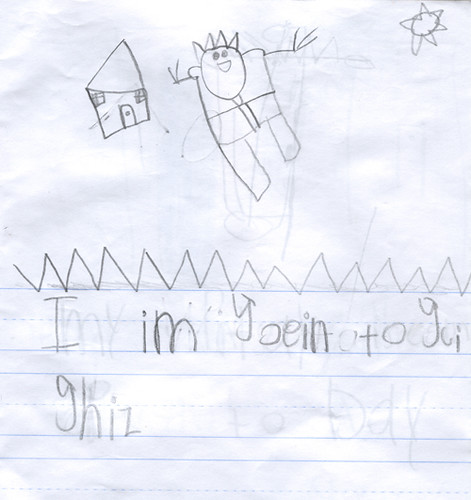 On the following page, K. was doodling again. This time it might be a glass with a straw in it, or perhaps an elongated face with pointy hair but no eyes. 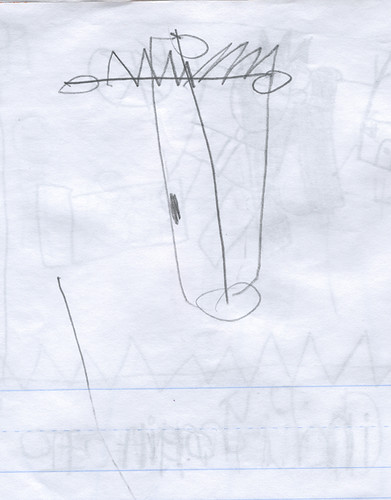 And the last page for today doesn't include much of a drawing. A stylized number 4? Perhaps K.'s age? The text reads: "My Prtsay is com op to Day." I translate this as: "My (party) is coming up today." Maybe it was K.'s fourth birthday. Party down! 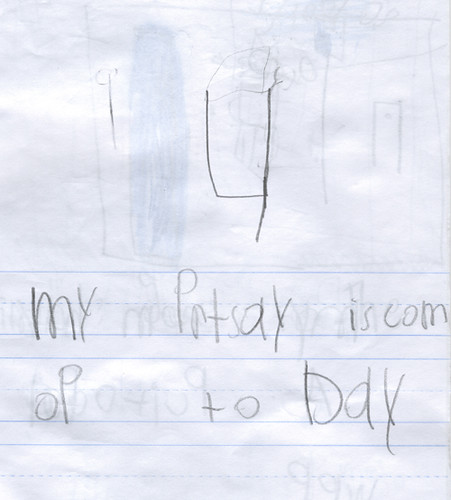 Moral:
Young children have exaggerated perceptions of their athletic abilities.