LJ Idol Exhibit B: Week 5 - Life as a Series of Bad Fashion Choices

This is my entry this week in the mini-season of

therealljidol, Exhibit B. Please read the many fine entries and check back later for a voting link. This week I chose the topic "It's Not Tacky If You Wear It Well."

My sister and I once got very silly, poking fun at the tendency people have to criticize their fashion choices in earlier photos, while being blissfully unaware of their current fashion crimes. We pranced around my mother's house, grabbing things like plastic centerpieces and toys, festooning ourselves with them as accessories, and declaring, "Did you SEE that picture of me from five years ago? What WAS I thinking?"

With full awareness of the possible ironies, I thought it would be fun to share some photos of some of my more questionable fashion choices over the years. But then, upon looking through the photos I currently have scanned in (there's a treasure trove of bad fashion in my mom's cedar chest of old family photos), I discovered very few I actually found laughable. The fashions -- let's face it -- were often deplorable, but my memories suffused these shots with beauty. 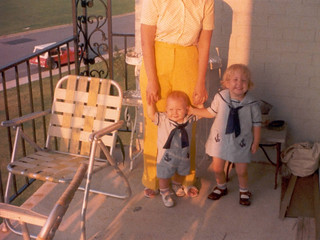 My brother and I in matching sailor suits, with my grandmother
in a yellow pantsuit -- her head cut off -- behind us.

When I was about 3 1/2 and my brother just old enough to walk at 1 1/2, my mother made us matching sailor suits. While this sounds incredibly tacky, even for the '70s, they were actually fairly tasteful for the time: fashioned out of a light cotton with pale blue and white stripes, with navy blue anchors on the pockets, piping on the sleeves and the broad sailor collars, and dangling navy-blue ties at the neck. For me, my mom made a little dress, while my brother's was a short pantsuit. In the only photo of us wearing them, we are standing on my grandmother's apartment balcony in Anandale, Virginia. She had been a librarian for the U.S. Bureau of Prisons and retired to the Washington, D.C., suburbs. My grandmother stands behind us, wearing bright yellow pants and a yellow flowered shirt, holding my brother by both hands. Her head is cut off, which tells me that my mother probably took the photo, because she presumably wanted to focus on her two children in the outfits she'd made.

I loved that sailor suit more than you can possibly imagine, but I thought I wasn't allowed to wear it unless my brother was wearing his, too. Sadly, he took a distinct dislike to his sailor suit and cried whenever Mom tried to put it on him. But he was one, and it might have been uncomfortable to crawl and toddle in. In fact, I'm not entirely certain that we ever wore them after this golden day at Grandma's. But I can remember, distinctly, fingering the dress as it hung in the closet, longing to put it on, never considering to ask my mother if I could wear it alone.

After all, I reasoned, what was the point of matching sailor suits if you had no one to match? 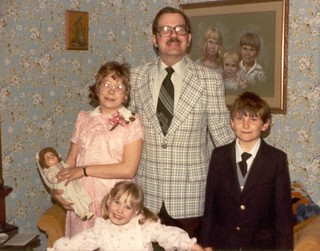 Me, my Dad and my brother, with my sister in front.

At age 13, when I was confirmed as a church member of the United Church of Christ, I wore my best dress at the time: a short-sleeved pink dress with little white hearts and a white Peter Pan collar. This, of course, being the '80s, it was made of a shimmery faux-silk material. (In those days, natural fibers were for dorks.) My parents had bought me a corsage, and in the photo, I'm holding an antique bride doll that used to be my mother's, which she gave me as a confirmation gift. My little sister, in front, is hamming it up as usual, wearing a homemade pink flowered dress with frills on the shoulders, her hair in pigtails and arms thrust out at her sides as if it was her moment of glory. My brother wore his only suit: a navy blue blazer over a dove-gray vest, white collared shirt and clip-on tie. His current go-to suit looks remarkably similar.

The best part of this picture is my dad, wearing a green and white plaid jacket with a wide green-striped tie, which even then was a few years out of date. I remember being horribly embarrassed when he would show up at school events wearing his plaid jacket or, even worse, plaid pants. "Why can't you wear jeans like the other dads?" I'd beg him. Over time, I've come to realize that the pride in my dad's face, as seen in his broad smile in this picture, and his never-ending positivity and support, made any outfit look good on him. 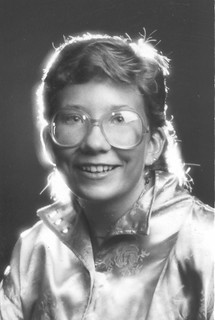 Despite having naturally wavy hair, I resisted the late '80s trend towards big hair. Instead, I would tell my hairdresser "Cut it as short as you can." For a couple years, I even had -- gasp -- a tail! For the blissfully uninitiated, a "tail" is sort of like a mullet that's really narrow in the back. I used to braid mine. In my mind, I looked like a lost member of the New Age band The Thompson Twins, but I actually looked like a lost teenager in denial about the fact that I was becoming a woman.

In my yearbook photo, though you can't tell because it's black-and-white, I'm wearing a bright blue faux-silk shirt with an Asian-style collar, worn open at the neck, as if I'd turned my collar up. With my giant glasses -- which take up half my face -- I look like I should be a secondary character in an '80s sit-com, popping in with a catch phrase to inject some surreality to the scene. 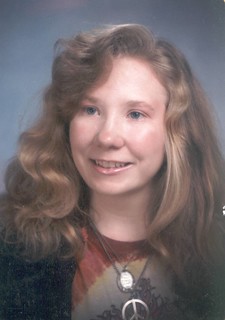 After I got to college, I grew my hair long, letting it flow free in big waves around my face. I discovered that I actually liked wearing skirts, and I loved pairing tank dresses with leggings and a favorite T-shirt. My "hippie" phase began, with tie dyes and embroidered shirts and clothes bought at the House of Kashmir in State College, who had the best price on imported clothing. Every day I wore a heavy-steel peace sign necklace, until it broke.

Finally, I had grown out of my awkwardness, and I was happy with myself for the first time in living memory. I wore patchouli every day and lost the ability to smell it; I actually owned hemp clothing. Looking back, no matter how thrown-together and overly complicated some of my looks became -- did I really need to wear every single color every time I went out? -- I see only the carefree perpetual summer of young adulthood. That is the person that I hung onto when things got darker -- with an emotionally abusive boyfriend and a schizophrenic/obsessive-compulsive first husband. Inside, at my best moments, I'm that hippie chick wearing Tevas and a peasant skirt, bouncing through the grass. 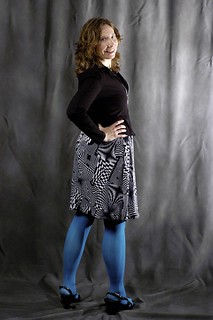 Me wearing bright blue tights and an op-art skirt

The next 12 years were challenging for me: I earned a Master's degree in Poetry and married The Seeker, who left me just before our first anniversary. I drank and ate myself to my highest non-pregnant weight and punished myself for my inability to hold onto my husband by dating The Luser, who was the human equivalent of Spike from "Buffy the Vampire Slayer" but without the redeeming qualities.

When I finally ended it with him, I took my young dog and moved to Philly to get away from the squalor of memory. Starting over, I reconnected with the people from those halcyon college days, and almost immediately, I began to feel like myself again. For a few years, I dated a guy I met through them and slowly began getting back to a healthy weight. Working for Otakon, I met my husband, The Gryphon. Things were definitely looking up.

Rather than the shapeless clothes I'd worn at my heaviest, I combed through vintage and thrift stores looking for unique items, like the black-and-white op-art skirt I wore in a portrait taken by the Otakon Staff Suite photographers, who were trying out a new backdrop and lighting kit. Of course, I still had a juvenile whimsical streak, pairing the skirt with bright blue tights that gave me Smurf legs. 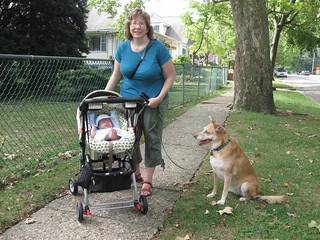 Me walking with my infant son and late dog Una

In our first seven years together, my husband and I reached new peaks of physical fitness and fashion. We both cut our hair, opting for modern styles, and we replaced our worn or quirky clothes with classic staples. I actually used a different purse whenever we went out, chosen to compliment my outfit! For the first time in my life, I owned more than two pairs of dress shoes. With the tips I learned from watching the TLC program "What Not to Wear," I gave myself a fashion overhaul.

And then came pregnancy. I was not one of those women who look like a skinny person who swallowed a watermelon. No, mine was a Jessica Simpson pregnancy, a Kim Kardashian pregnancy (and they both have my sincere sympathy for the unrelenting callousness of photographers and commentators). I began to live by the famous Gilda Radner quote: "I base my fashion sense on what doesn't itch." Late in my pregnancy, that meant it had to be 100 percent cotton and loose enough not to bother me. My husband joked about the "muumuu" dress I liked to wear around the house, but I just gave him the Angry Pregnant Woman look that says, "If you don't cut it out, I'm going to make a nearly-10-pound object come out of one of your very small orifices."

After my son was born, none of my carefully selected clothing fit any more. Much to my chagrin, after I stopped wearing pregnancy pants -- with their gloriously expanding midsections -- I realized I'd gone up not just one or two sizes but five or six. In despair, I bought just enough items to last me for a while, and when the weight didn't melt off, I continued to do that every season.

Rather than my fitted tops and my wide range of blazers and jackets, my daily uniform is now a V-neck or T-shirt and a pair of cargo shorts. I realized with chagrin, while dressing for our Father's Day brunch, that I currently have only two skirts that fit. Of course, I'd be happy to wear more skirts if: 1) they had pockets, because grabbing my phone out of my diaper bag isn't easy; or 2) my son didn't climb on my lap and pull my skirt up to reveal areas only a husband and an ob-gyn should see.

Because of those twin problems, I must confess that, until it got too big on me, I actually bought and wore a skort.

But you know what? I'm okay with my current fashion disasters, just like I own the ones that came before them. Because when I look at these pictures, 20 years from now, I won't just see a harried mom. I'll remember the daily joy of discovery with my son -- now 3 -- as we run and jump from adventure to adventure. Hopefully, when people see the way we're both smiling, they'll forgive me my sartorial sins.