This is my entry this week in the mini-season of

therealljidol, Exhibit B. Please read the many fine entries. This week I wrote on the topic "Finding Serenity."

Wilson family vacations have become legendary. Thanks to a disastrous trip to Maine about 25 years ago, we now expect things to blow up in our faces. To hear us discuss it, Clark Griswold's family from the "National Lampoon" series has nothing on us.

It would be hard to top that Maine vacation, which lives in infamy: Our car broke down on the way there, which would have been bad enough but was compounded by the fact that it happened to be the only car pulling our little blue camper. In those days before cell phones, my mom and I hitched a ride on a beer truck to a Red Roof Inn so that we could call a tow truck, while my dad kept my brother and sister amused by leaning into the hood to assess the problem and catching his tie on fire.

Not willing to give up, my mom charmed a drive home from the tow-truck driver for her and my brother, and they threw enough tents and gear in her Ford Escort to theoretically save our camping vacation. Then it was off to Maine, suitcases and duffle bags shoved into every inch of the car, arriving in Old Orchard Beach just in time for a town-wide gas leak. Later that week, a thunderstorm blew our tent over, forcing us into a seedy hotel with creepy noises coming through the walls so that I cuddled close to my sister, even though she kicks in her sleep.

And then to top it off, we made a side trip to Boston on the way home, where Dad opted to park in the street, instead of the safer (but more expensive) underground parking garage, making us a target of a smash-and-grab theft ring. The thieves thought they were stealing an early Apple laptop but were really stealing the computer bag my brother used to carry his cassette tapes and miscellaneous plastic novelty toys, such as his favorite: a funny rubber-faced hand puppet he called Harold. Hey, at least we got to see the police station.

Few vacations since that one have been quite so colorful, but it seems Murphy's Law follows my family. So for example, when we rented a beach vacation at Cape May about eight years ago, we found pipes dripping sewage onto the dining room table. My brother, who was an expectant father, traveling with his pregnant wife, turned our frowns upside-down by getting the landlord to give us an upgrade into far fancier digs.

A couple years ago, we all stayed in a cabin on Raystown Lake in Pennsylvania, where our plans for outdoor activities were foiled by nearly nonstop rain. Last year went relatively smoothly, the main glitch being that my dad waited too long to reserve our hotel rooms, forcing us into a mid-week room change into smaller rooms (and my husband and I moving into the guest room at my sister's nearby house).

Every year, it's something. One year I rode a bike one-handed down the hill, ran into a tree, and bit my lip in half. For the rest of the week, my meals consisted of drinking breakfast shakes through a straw.

Then there was the beach vacation when my enterprising little sister went exploring without letting any of us know. We spent the afternoon running around frantically, with the help of a very stalwart lifeguard who looked as relieved as we were when she sauntered back to our towels as if nothing had happened.

Once, on Assateague Island, my brother ate some bad shrimp and threw up all over our tent, so that he and I had to sleep in my 1973 Chevy Caprice Classic (the same vehicle that had failed our family so gloriously on the way to Maine). Our next day's activities involved a trip to the Laundromat.

This year's attempt was no different. We rented a cabin at a little retreat a stone's throw from my mom's place. My brother, sister, and I stayed with our families for a week in advance of a joint 70th birthday party for my parents. We should have known that would be far too many Wilsons present to avoid calamity.

Everything about the place sounded great: swimming pool, playground, a beautiful natural setting, and an unbeatable price. But we didn't count on the unprecedented heat wave. With no air-conditioning and terrible airflow in the cabin, even with the fans going 24/7 in every possible window, we dripped sweat on everything.

On top of the insufferable heat, there was the problem of the quirky furniture, apparently hand-built by gnomes who loved sharp corners. We accumulated bruises in every possible extremity: nearly every conversation ending with somebody screaming "Ow!"

We made the best of it: getting out of the heat by taking the kids to story time at a local library, and we spent a lot of time in the pool. One day, we visited a state park we used to frequent when we were younger, and even though the water was frigid cold and black flies harassed my husband; even though my mom had to seek shade at a stranger's table when our table became a sunning spot suitable for tropical snakes; even though the trucked-in sand stained my niece's pink-and-white bathing suit a yellowish brown, it was a welcome respite.

And I was secretly proud of my family when, instead of grousing about a coming thunderstorm, they all took up positions on the porch to watch the storm roll in, with as much excitement as if it were a blockbuster summer movie.

Our last morning, I walked around the property, surrounded by luscious birdsong, taking pictures of the unexpected beauty: the vacant swimming pool, where tree shadows swum; retired camp cabins sinking back into the undergrowth; wild daisies flourishing amidst carefully cut grass. This vacation will be remembered as the time we all melted together, but I hope we'll also remember the smiles.

As I reflected on this, after a five-hour trip home, I discovered I'd left my wallet at the Wal-Mart after buying ice for Saturday's party. Of course I had.

My mom just called to ask me if I'd like to do it all again next year. She was talking up a bed-and-breakfast run by a friend. That couldn't possibly go wrong, could it?

I told her I'd have to think about it. 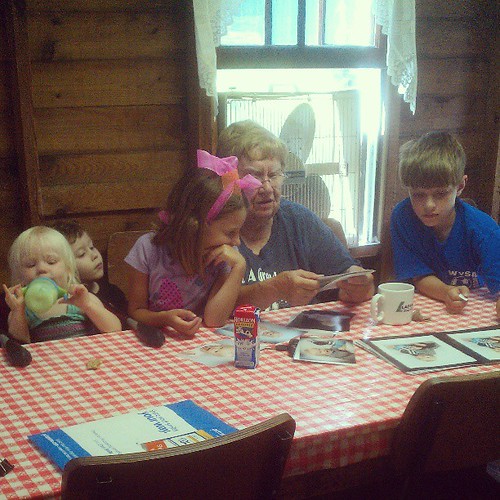 My mom hangs out with her grandkids in the cabin's dining room.