It's a good thing I left early for my hair appointment this morning. I had left a little extra time to hit an ATM on the way, but I didn't count on a truck blocking my one-way, one-lane street near the end. I had to back up to a cross street so that I could get on my way.

You would have thought they could have placed a sawhorse at the intersection, stationed a flag person. But apparently, nobody considered doing that. I had to gesture to two vehicles behind me, telling them to turn, as well.

That's OK. I must be the only woman in the world who doesn't enjoy having my hair done. Every time I go in, I get nervous, wondering if I'm giving the hair dresser good instructions. Even though I rely on her expertise, I know she follows my wishes, and I always wonder if I'm making good choices. 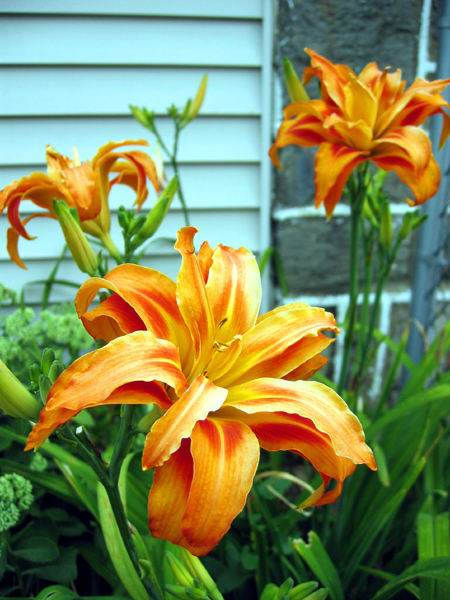 I feel like an imposter, like I'm supposed to be able to navigate the world of women's beauty. It's not something that comes naturally to me, and while I'm paying professionals to help me, sometimes I feel like I'm dancing in the dark.

On the way to my hairdresser's I noticed a pair of crossed legs protruding from the driver's side of a car. It reminded me of something from an '80s movie, where you see the woman's legs before you see her body. So as I drove by, I took a peek to see what the woman looked like. It was a man. Not just a man, but a man in his 60s, bald and wearing a white polo shirt. It seems the movie I was in at that moment must have been a comedy.

Seen on a sign near the salon: Choice, not chance, determines destiny.

Today, I had to bring reading material, because I was having highlights put in (in order to fool more people into believing I'm still blonde). Afterwards, I'd get a hair cut, and when that was finished, I'd have my eyebrows waxed by the salon's aesthetician.

My current aesthetician doesn't believe in making as many adjustments to my eyebrows as the first one I went to. She opts for a more natural look, saying she doesn't believe in "eyebrow trends." We've had discussions about the pencil-thin eyebrows of the '40s, the bushy dark brows of the '80s (always eight shades darker than bleached-blonde hair), the flourishes of haute couteur. Instead, she shapes brows with an almost mathematical formula, based on the distance from the eye. She showed me, the first time, with a measuring stick.

My hairdresser and I always talk. It's sometimes about our families, often about our pets, frequently about television, and also about miscellaneous topics. Today, we got on the subject of names. It started because I showed her a picture of our doggie, Una, on my cell phone, and she asked me how I'd given her that name.

I explained that my brother, whose dog gave birth to Una, used to call her Bear when she was a puppy, because she was very fluffy then. I didn't think Bear was a good name for a girl dog, so initially, I considered naming her Ursula, which of course, is Greek for bear. But something didn't feel right about that name. I thought it might be long for a dog's name, since I've heard they respond better to names that are one or two syllables. I was looking at the name book, and Una was on the same page as Ursula. A pretty name, I felt. The name was familiar to me through Charlie Chaplin's last wife, Oona O'Neill, with whom he lived happily until old age, fathering many children.

Una means "the one," which seemed fitting, since she was my only pet. At times, she's been my only companion.

My hairdresser was interested to discover that I own several name books and enjoy looking up names. I told her the meaning of some common names, some of which are amusing. Did you know, for example, that Brendan means "smelly hair"?

She asked me, if I could have any name, what I would choose. I told her I'd still be Alyce, since it suits me (Alyce means "noble" or "truthful one"), but I confessed to having changed the spelling in college from "Alice." When she asked me why, I told her that back in grade school, junior high and much of high school, I was afraid of being picked on, of being singled out. I hid behind a book for much of that time, and although I was active in school activities such as the marching band and yearbook, I only expressed myself around my trusted friends.

When I graduated, the class voted me Most Studious, which I found amusing, since schoolwork came easily to me. I spent most of my free time writing, practicing the piano and clarinet, and a host of other extracurricular activities. That's when it occurred to me that most of my classmates didn't really know me. All they knew was that I read a lot.

So when I left for college, I decided I was not going to hide anymore. I was going to be myself and not worry about what anybody thought. Changing my name was like coming out from behind my book, declaring to the world, "I am Alyce," in all my weird glory.

My hairdresser, who has a very ordinary name, said she'd always wanted to be called Monica, or perhaps Sydney. She joked that maybe she'd even change her name every day, to suit her mood. I told her that she looks like a Monica to me. She smiled. Just now, I pulled out my name book and looked it up. Monica means "adviser." When you consider how much I rely upon her to help me find a good hairstyle, to recreate myself anew; and, beyond that, when you consider how many times she's offered solid practical advice on life, I think she truly is a Monica.

Now a quick update on some other news. My mom e-mailed me yesterday to tell me that her dog, Sunnie's, operation for breast cancer went smoothly. Mom is awaiting the results of the biopsy. Sunnie is at home, resting comfortably, demanding special treatment and being her spoiled, cheerful self.

On the job front, I neglected to mention that The Gryphon has been working a contract position for about a month and a half, doing programming for a Web design company. The contract lasts until the end of July, but he's got feelers out for a couple other positions he says are promising. I will, of course, keep you posted.