I have a few minutes before things really get started at Otakon Press Relations, a.k.a. Press Ops. So before I forget it, a few notes on the weekend so far. 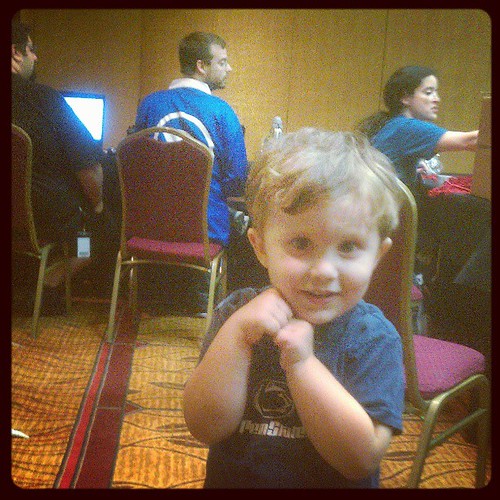 We arrived Thursday, but my heart was at home with my kitty, Luke. We'd had to run him to the emergency veterinary center for failure to eat. When a cat who normally gulps down his food just sniffs it, mews plaintively, and walks away, you know something is wrong. He was diagnosed with an ear infection, and we were sent home with drops and orders to bring him to our vet if he still wasn't eating by the end of the next day.

After calls to both Luke's regular vet and the cat sitter, we made arrangements for the sitter to take him in if he refused to eat the next day. Even though the vet promised to give him good care if that happened, I still felt guilty about leaving.

While helping to register press on Thursday, and while KFP, the unofficial Press Ops mascot, played with trucks and dinosaurs and watched "The Piglet Movie," all I could think about was our ailing kitty, at home alone feeling sick and lonely. When the cat sitter finally texted to tell me that he had eaten half his food, I finally began to feel better.

Friday (yesterday) was one of our busiest interview days. Normally, Friday is a little calmer, but most of the schedules this year were determined in advance, allowing us to schedule them earlier. Most of the day went smoothly. There were the usual mini-crises caused by people running late due to either scheduling conflicts or acts of god, and there was one person who tried to register at door with a really shady story for a site that he didn't own which hadn't posted anything in more than a year! Other than that, it went well.

In the evening, I attended Mystery Anime Science Theater 3000 (MAT3K) with my little Kung Fu Panda and my friend the Water Ballerina. We got there in time to watch them doing mic tests, which I thought might interest KFP but actually upset him (especially the feedback). He also got distressed when hundreds of people started to filter into the room to watch the show. Even though I had promised "a play with puppets and a movie," which isn't exactly a lie, KFP made the very human choice of deciding roughly halfway through the film that he couldn't take any more of it.

For those who don't know, MAT3K was the "top secret humor project" I've been assisting with. We aren't allowed to discuss much about it ahead of time, so I kept it on the down low. I was thrilled to realize that some of the lines that got the biggest laughs in the portion we saw were actually my lines! So you can imagine how disappointed I was to have to pick up and go.

Out in the hallway, I told KFP that "Mommy helped write this show" and asked if we could just stand in the back, and he could sleep in his stroller if he wanted. He dissolved into the sort of tears only a 3-year-old can muster and said, "I want to go back to our roooooooom!"

"All right, self," I told myself. "It's time to suck it up and be the mommy." So we headed back. The universe made me feel better almost immediately. First, we ran into a friend, the AMV Editor, who had had to leave just after his video bumpers had aired as part of the program. He had to go set up another theater. We commiserated for a moment before setting off our separate ways.

Then I ran into the Plushie, who is possibly the sweetest, most cuddly person you've ever met. She gave me hugs and told me she'd been dealing with crises as the head of LARP. I realized my "problem" was relatively small.

Looking at the bright side, I DID get to hear people laugh at some of my lines, and I've only had to sit through "Origin: The Spirits Within" three and a half times.
Tags: amv editor, kung fu panda, otakon, plushie, water ballerina
Subscribe