We now continue with the saga of K., a boy of indeterminate age, who had written and drawn about his life in a book called "My Very Own Drawing & Story Book 1." I found that book recently while walking the dog. The boy is just beginning to read and write, often sounding out things phonetically, and he writes and draws often about his favorite things: his family and playing basketball.

Page 19 contains a drawing of K. with a ball in his hand, apparently about to make a basket in a basketball hoop to the left of him. At right is a blue oblong rectangle, which I believe is his bed, due to the text: "My rom hav A Puit Pol WPP." My rough translation is "My room have a basketball hoop (?)." Based on the picture, it appears to be an indoor basketball hoop, probably at a little boy's height, played with a miniature ball. At any rate, he seems to be happy with it. 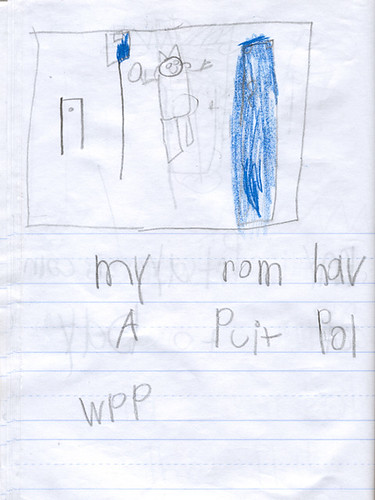 The next page is topped with a date, "5/100/08." It's been scribbled over, perhaps because he figured out that there's no "100th" of the month. There is no picture, and the text reads, "im goe to the zoo." My translation of this one is pretty confident: "I'm going to the zoo." I find it interesting that K. didn't draw any pictures to go along with this. Perhaps he didn't know what he would see there? He also didn't follow it with other pictures from his experience, so I'm wondering if he went, after all. 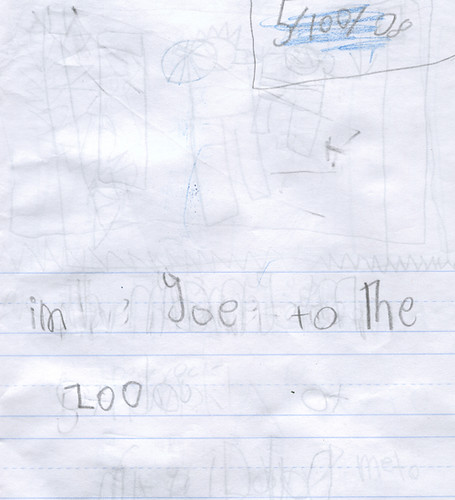 On the next page, someone is playing basketball, it seems, but this person doesn't have the distinctive pointy hair that seems to indicate K.'s self-portrait. The text reads, "My Mom is com to col to Day in im happey." My translation: "My Mom is coming to school (?) today and I'm happy." At first, I thought that it read "My Mom is coming to call," but it seems extremely old-fashioned, and it's unlikely that K. or anyone he knows talks that way. Plus, I'm reasonably certain that he lives with his mother, so her "coming to call" makes no sense. Instead, I'm guessing that he was trying to write "school." Perhaps preschool, since I'm guessing K. is about 4 or 5. Maybe the figure with the basketball is his mother, and he thinks that when she visits his school, she'll play basketball with him. 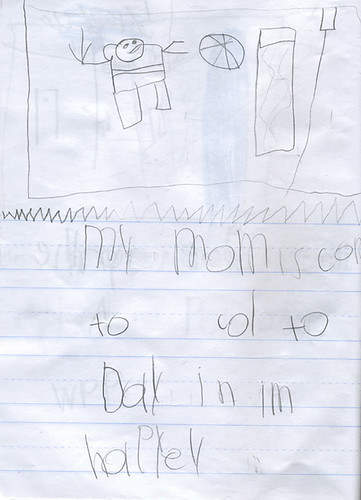 At first glance, the next page is almost identical, although the figure playing basketball this time is the pointy-haired figure that seems to represent K. The text is more labored this time, as if he was correcting himself, trying to spell things correctly. The original version read, "I mi goe to novyok to Day in im geo to ghizqz." Above some of the words, others have been written, also in K.'s hand writing, so that the corrected version reads: "I mi goe to newyock meto and go to Cucke." My rough translation of it is, "I may go to New York metro (ph), and go to cook (?)." Somehow, I have a feeling the last part is wrong, since K. seems far less interested in cooking than in playing ball.

This page is interesting, I think, because it shows that he's really trying to learn how to spell correctly, apparently on his own. Could this be connected to the fact that, in so many of these drawings, he's by himself? 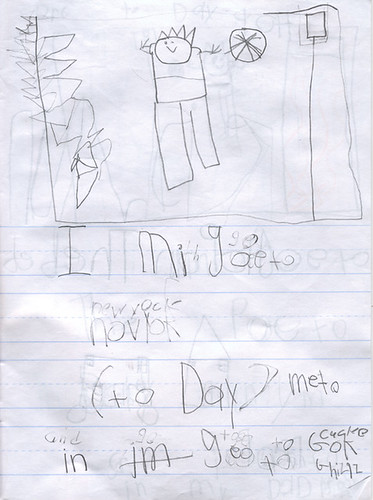 The following page is just playful, as he seems to be thinking of a popular Dr. Seuss book, Hop on Pop. At the top of the page, he's written, "HOP." Underneath it, he's done a creative version of his name, with the letters run together. I've blurred it out, since I'm not using K.'s full name. Underneath it, he's written, "Hop on the bed." A small drawing of a house is underneath, plus another house that seems to be on wheels, with two people inside, one slightly bigger than the other. Him and his Mom, driving somewhere? At the very bottom of the page, he seems to be playing with rhyming words, writing "Mop." I notice that, despite the text, no one seems to be hopping or mopping. 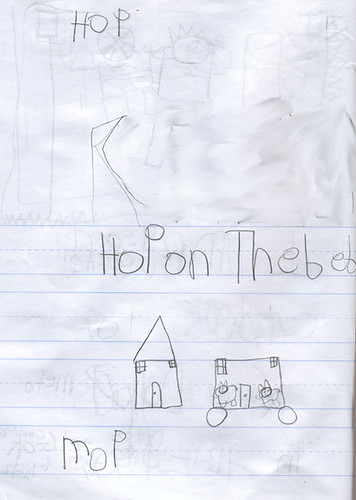 Today's final page revisits familiar themes. At the top of the page is K. playing basketball alone in his room (I'm guessing, based on a previous page). At the top it reads, "Prc to day," which I translate as "park today." The rest of the text reads: "I im goe to the Poc to Day in ym sr is com to in my Dad is com to." My translation is: "I am going to the park today and my sister is coming, too, and my dad is coming, too." No wonder he's so happy. At least it gets him out of his lonely bedroom, where he can either play solitary basketball or write and draw in his little book. 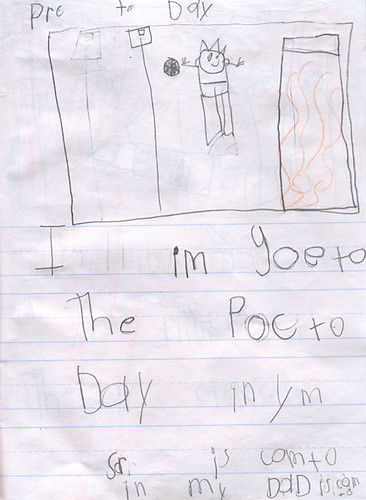 Moral:
Kids need to get out of the house once in a while.