Since this past Friday was his birthday, The Gryphon and I wanted to do something special this weekend. On Sunday, we went to dinner and a movie, my treat.

Unfortunately, most of the day I was suffering from a headache, partly due to dehydration from not drinking enough water the day before; partly due to atmospheric pressure from looming thunderstorms. In fact, I was afraid I wouldn't be able to enjoy the movie, but I didn't want to cancel our plans.

So most of the day, I tried to take it easy, drink lots of water, take some painkillers, wear a cold gel mask, all the things that tend to help. I was feeling better by the time we headed out, although I still wasn't feeling 100 percent. 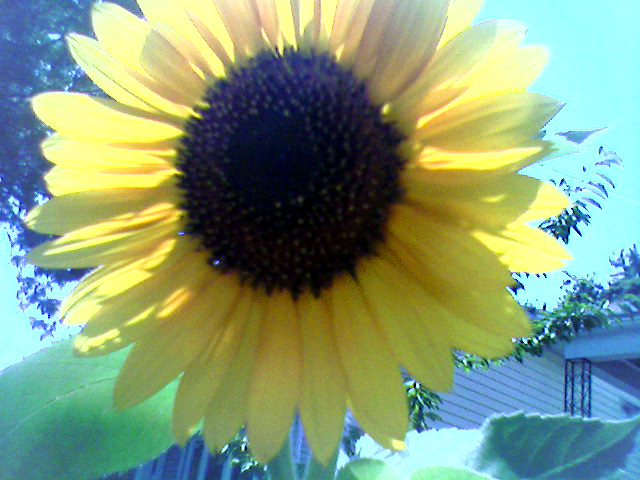 A camera phone pic of a sunflower

Originally, we were going to see The Dark Knight at The Bridge, our favorite movie theater, and then have dinner afterwards. But we arrived just 15 minutes before the movie time, to learn they only had seats left in the first two rows. The Bridge is unique in that you actually pay for specific seats, instead of general admission. I normally don't like sitting up front, but I knew that with my headache, I really couldn't do it or I'd leave with a full-blown migraine. I suggested we catch the later showing instead.

So we bought tickets for the 9:30 showing and then drove across town to The Continental Mid-town, another of our favorite places. If you're willing to splurge a little, The Continental is a great date place, with a retro '60s decor and delectable food. Some of the plates are big enough to serve two, so we planned to share. I let The Gryphon order, since it was his birthday celebration. He selected a beet salad with micro greens and goat cheese, along with grilled octopus, both of which we had as appetizers. For a main course, we shared seared tuna, which came with a delicious mushroom risotto. We were pleased with all the food.

We ordered some of their special drinks, too. I had Pimm's Cup, which is Pimm's No. 1 and champagne with ginger ale, lime and a slice of cucumber.

The desserts are tapas, or bite-sized selections. We each got our own but tasted each other's. I ordered the S'more Cones, becauase I'd gotten the hankering for s'mores while toasting marshmallows around the fire the night before. The Gryphon had their Peanut Butter Cup, which is a miniature pastry with chocolate and peanut butter.

Even after leisurely drinking two cups of coffee, we had lots of time left before we had to head for the movie theater. At The Gryphon's suggestion, we walked down to Walnut Street. We were going to stroll through Rittenhouse Square, but then it began to rain a little, so we took refuge in a nearby Barnes and Noble. While The Gryphon looked at computer books, I checked out the literary magazines, of which they had a nice selection. I was suitably impressed with several of them to buy issues, with plans to submit my work later. They are Hanging Loose, Opium, The Kean Review, Vanitas and The Sun.

About this time, I realized that my headache was pretty much gone. This is a good thing, because it would have been hard to watch The Dark Knight, which is an intense movie, with a nagging headache.

A lot of people have written about the movie already, but I'll add some quick impressions. The title is apt, because this movie is a much darker look at the Batman story. Heath Ledger is terrifying as The Joker, embodying the role so completely you can barely tell it's him, what with the ticks and the voice and a characteristic limp. Ledger transforms into The Joker in a much more complete way than Jack Nicholson ever did in the Tim Burton movie. That's what makes this version so frightening: while Nicholson was over-the-top and therefore less realistic, Heath Ledger's Joker is damaged goods, at times seemingly pathetic. Not only does he seem more like somebody you could actually encounter, but he's clearly someone with nothing to lose, someone who, as Michael Caine's Alfred puts it, just wants to see the world burn.

Contrast that to the almost pathologically upright and emotionally-controlled Batman, as played by Christian Bale. He's a man who's so wrapped up in his cause for justice that he can see almost nothing else. His quest is paralleled by that of Harvey Dent (Aaron Eckhart), the district attorney who strives to clean up the city by legal means.

Perhaps that's what makes this version of Batman so different. You feel like there's really something at stake: it's not just a game this time. It feels real, down to the identifiable Chicago setting. This version of Batman does what few other movies have done: stripping away the safety of the superhero genre, which abounds in unrealistic situations. When you look at this Joker, a psychopath who wants only to cause pain, it's easy to draw parallels with recent events — terror strikes for example — where we are baffled by the brutality and pointlessness of the violence. How can we possibly fight someone who wants nothing rational?

While this movie doesn't offer easy answers, it asks the hard questions and offers a thin, bright hope: that whatever terrors we endure, the goodness of human nature will win out.

Moral:
The closer a movie gets to reality, the scarier it is.