Spirit of the Neighborhood

I walk our doggie, Una, once or twice a day, and we've gotten to know some of the neighbors, several of whom like to chat with me, and pet Una. 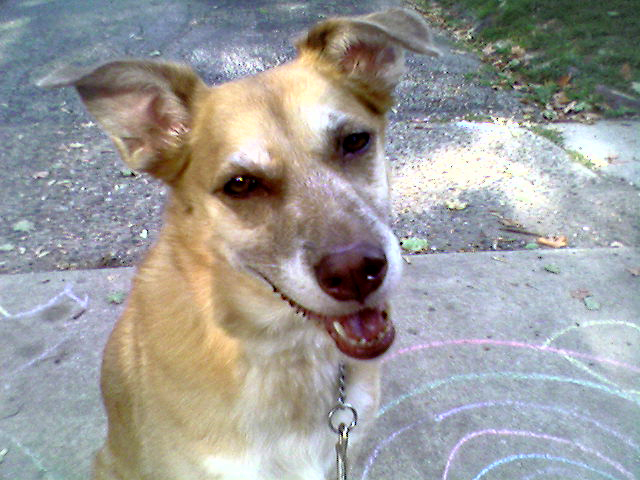 Una smiles on one of our walks

There's the retired man with the beautiful garden who sits out front in a plastic chair in the shade for hours. He likes to share gardening tips with me, and occasionally he complains about his neighbors, who fail to pay the same attention to their front lawns.

The aggressively friendly Adele, whom I wrote about a couple years ago, has moved on. I supposed she found housing elsewhere. But I was recently accosted in a similar way — grabbed by the arm and peppered by questions — by another neighbor, a petite blonde who is so thin she looks skeletal. I'm not sure if she's anorexic or simply sick, but she took a shine to me when she saw me communicating with the deaf man down the street who owns a very aggressive Corgi. She was amazed at our silent communication, although I assured her that I didn't know sign language. Until then, she said, she didn't know he was deaf but just assumed he was rude.

She seems to be in her 30s or 40s but likes to wear the latest teen fashions, and she calls my name out the window now when we pass by. I've noticed that she seems to be one of the most sociable people in the community. I see her often engaged in conversation with people, and I wonder now how often she just latches onto someone walking down the street.

Further along our walk is the quiet, spectacle-wearing man whose poodle mix was friends with my dog until passing away a couple years ago. Now, when I walk by, we talk cats. He adopted a cat the same time we adopted Luke and has e-mailed me pictures of his cat and his deceased dog, who were great friends.

He lives next to a woman who has been feeding stray cats, who lounge all over her large porch and manicured lawn. Unlike my mom, she hasn't actively tried to spay and neuter them, so new kittens are born a couple times a year. They're cute, and Una likes to gawk at them, but I know from the spectacled man that many have met unkind fates, due to vicious dogs and fast cars.

Some people don't say much, like the Chinese family who run their own business. A silver food trailer is pulled up outside their house when they're not on the streets somewhere, selling their food. They never say anything, but they usually smile and wave.

I get a similar reaction from an Indian family who lives further down the street. The older women wear traditional dress, although the girls dress in contemporary clothing. Once, a 10-year-old girl with glossy black hair told me that I was beautiful as I passed. I told her that she was, too.

A number of neighborhood children like to pet Una, and they've learned to allow her to sit first. Then I give them a treat, and they can hand it gently to her. This has helped to accustom her to children, and she no longer tries to run away from them, like she used to.

I keep an eye on the kids as we pass, and if I ever see signs of distress, I try to help. Once, I intervened in what I was sure was a case of bullying, as a bigger kid had a smaller kid down on the sidewalk and was pummeling him. I stood over them, and mustering my best serious adult voice, asked, "What's going on here?"

They both looked up, smiling. The younger boy assured me, "It's OK. He's my brother." I guess they were just roughhousing. I nodded grimly and walked away, the unofficial neighborhood watch.

Behind a weathered fence of railroad ties lives a little Dachshund that frightens Una with his perpetual barking. The same couple used to also have a Chihuahua mix that my dog loved. She'd even risk the Dachshund in order to lick her Chihuahua buddy through the fence. So I've become friendly with the elderly couple who own the Dachshund (They had to give the Chihuahua away because it played too rough with their elderly Dachshund). I learned some disturbing news lately: the woman is being treated for thyroid cancer. So far, the treatments are going well, but I haven't seen her in person in a long time.

This is the same woman who waited until I passed by one day last year to give me a wedding present: a gilded picture frame, with a card. This despite the fact that we don't even know each other's last names.

There's a friendly crossing guard we often speak to, an older man with eczema on his legs. He tells us that at home he has a large collie. Every time Una sniffs him, he says she's sniffing the dog. But I bet you she recognizes him, too.

Further along is a woman who fosters dogs in her home. She also has a couple of her own, one of which is a bit of an escape artist, a Siberian Husky. When I see her running around the neighborhood, I talk sweetly to her and get her to walk back home, where she usually runs off as soon as I ring the doorbell.

Then there's the woman who sells items at flea markets for a living. Her porch is piled with boxes. She likes to pet Una, and once told me that, before she knew her name, she referred to Una as Curly Tail, because when she's happy, her fluffy tail curls up.

The flea market seller lives next to a man in his 50s or 60s whose two dogs were friends with Una. They have both since passed on, but he's got a new dog who's equally friendly. Whenever we pass, Una pulls across the street to see if her friend is around.

Una also remembers where the scary dogs live and refuses to walk on the same side of the street as any dog who has frightened her before. She's a lover, not a fighter.

Further still is a single mother of teenagers who has two bouncy young dogs and loves Una. She usually carries treats, which she gives her while cooing at her. Occasionally, we've caught her without treats, and she's apologized. I assured her that's not why Una likes her, and Una ran up to get patted, anyway.

She lives on the same block as the woman who runs a daycare center. She's good about teaching the kids not to run up to strange dogs, but when the children are outside, we cross the road, just to be sure. I wave at her from across the street. I rescued her dog for her once, a little terrier who had wondered out of her yard. Una and I found it wondering near a busy road, and I scooped him up in one hand. After I read his name tag, I walked him to her house to try to return him, but she was out looking for him. So we returned home, and I called and left a message. The entire time he was visiting, he tried to hump Una, wearing out his welcome. She sat with her back to a corner until his owner retrieved him. He lived to a ripe old age and has since been replaced with another small dog who is always on a leash when he's in the yard.

Across the street lives a very sweet dog whom Una likes to sniff through the fence. She is so friendly and sweet that I find it amusing her owners hung a "Beware of Dog" sign on the fence. I've noticed she does bark at other people, but I guess she doesn't see Una and I as a threat.

Then there are the people that we run into occasionally, like the residents of an assisted living home who sometimes stop to talk to us as they take walks. And there are many dog walkers whose dogs love Una. Some dogs are calm enough to greet in person, and with others, we simply wave at each other across the street as their dogs strain at their leashes, wagging tails. There's a woman with a thick Eastern European accent who waits at a bus stop for her daughter to return from school. She always pets Una and praises her for being so good.

Sometimes I have a limited amount of time for my walk, and I wish I could become temporarily invisible to speed up the process. But I guess that's the price of being sociable. We've become, I guess, a common sight in the neighborhood. Recently, a couple people have told me what that means to them.

The first was the old man who lives down the street from me. He has a meticulously repaired and painted high red wooden fence, which separates his very small lawn into two sections: an unused patio and a separate patch, which encloses, in turn, a brick circle within which he plants plastic flowers. At least once a year, he paints the fence and seals the sidewalk cracks. We passed him as he was doing touchups and, apropos of nothing, he said, "You're a good person."

More recently, the young Rasta guy who likes to greet me cheerfully from his lawn told me that Una and I represent peace and serenity, that every time we pass we look so calm and happy. He added, "You're the spirit of this neighborhood."

I didn't know what to make of that, but I thanked him. The spirit of the neighborhood?

Maybe he knew just how much of this neighborhood I see on our walks, how much I know from watching people, chatting with them. Maybe he suspected that I carry them all inside, the texture of my subconscious. Occasionally, like today, I give them a second life through words.