therealljidol, Exhibit B. Please read and vote for the top three. This week's topic was "The Winner Takes It All." The deadline was actually yesterday, but since I'm not competing and was busy that day, I gave myself an extension. 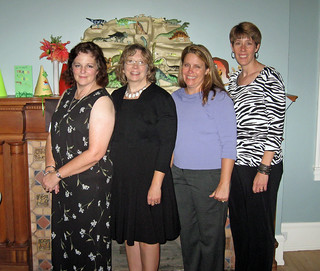 Arriving at my 25th annual high-school reunion, I couldn't help comparing myself to the other attendees: My hair still isn't showing any gray, and while I'm still struggling to lose the last 25 pounds of pregnancy weight (a good three years after having the baby), I was comforted to see many of my fellow classmates had also softened up. Indeed, many of them had done so since our last reunion five years ago, when I'd been much slimmer (although even then, I'd been kicking myself over the 10 pounds I'd gained since my wedding day, a year previously).

I'm sure everyone who arrived was doing the same: sighing in relief when he or she spotted someone with less hair, more gray in the surviving locks, a larger waistline, or a more matronly outfit. Perhaps this was why the room so soon became filled with laughter and excited chatter. Time was the great equalizer erasing our differences, and whoever had been popular, athletic, or touted as the next great American success story waiting to happen, we were all now seasoned, you might say. Wearing our dressy casual best, we mingled and caught up, starting nearly every conversation the same way: "Oh, my God! Is it really you? So, what are you doing now?"

I'm sure we all arrived with similar fears: Had we achieved enough? Would we be the sloppiest, oldest-looking, most rotund person there? Would anyone call us out about our previous big plans, and cast our simple successes back in our faces? But instead, we pulled out smart phones to share pictures of family members (children and, in some cases, grandchildren; in other cases, pets). We talked about what we were doing now and what we still hoped to do. And everyone smiled and nodded, repeating the same phrases: "Nice! Aren't you lucky? That sounds interesting."

Then, it was time to sit down at tables with our closer friends -- in my case, people I knew from the band and my church -- to wax nostalgic. For the benefit of our spouses and partners, we rehashed old stories about our high-school days and laughed about how silly/foolish/exuberant/naive we were back then. From this sort of distance, we looked back at our younger selves as if chuckling over our own children: Can you believe we did that? Can you believe we talked that way, wore those clothes, pulled those stunts?

At the close of the evening, we gathered for an ill-fated group picture, when no one could figure out a good way to cram in 75 class members, the largest attendance ever. We made excuses when it was time to leave: have to relieve the sitter, let the dog out, get an early start tomorrow. We promised to get together for lunch with people we'd learned lived close to us, thinking even as we ducked out the door that it probably wouldn't happen.

Something unexpected happened in those 25 years since we graduated high school: We grew up. And because of that, we were all winners.