Panda Corner: Back in the Game

For those who didn't listen to the voice post I uploaded on Thursday, KFP was sick last week with the croup. Needless to say, when we heard the cough last Monday, we freaked out just a little bit and called the doctor's office.

Fortunately, according to them, he did not show any signs of serious concern. His cough didn't rise to the level of needing immediate care in a doctor's office. The nurse assured us that we could care for him at home. She suggested taking him in the bathroom and running a hot shower to create steam. We did that, but he got agitated, repeatedly saying, "I don't want to take a bath. I don't want to take a bath."

Instead, I followed through on her other main suggestion: to run a humidifier. We ran it constantly in the room where he was. Since he was having trouble sleeping lying down, he and I spent a couple nights propped up against each other on the couch.

By the weekend, he had turned around considerably. On Sunday, he was so bouncy and full of energy that if he didn't occasionally cough, I would have thought he was completely over the illness.

Now, about 10 days since he first started coughing, he's doing extremely well and only rarely coughs. He went back to preschool this week and will return to soccer, too. That's good, because he did extremely well his first class, and the instructor said he listened extremely well for his age. 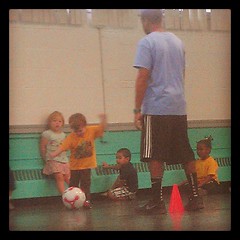 KFP learns how to pass a soccer ball.