And now the continuing story of K., a boy of indeterminate age, who had written and drawn about his life in a book called "My Very Own Drawing & Story Book 1." I found that book recently while walking the dog. The boy is just beginning to read and write, often sounding out things phonetically, and he writes and draws often about his favorite things: his family and playing basketball.

Page 25 is yet another picture of him playing basketball in his room (the rectangular shape at the bottom is his bed). This time, he's colored over the entire page with orange for some reason and, seemingly unhappy with the drawing, has X'd it out. 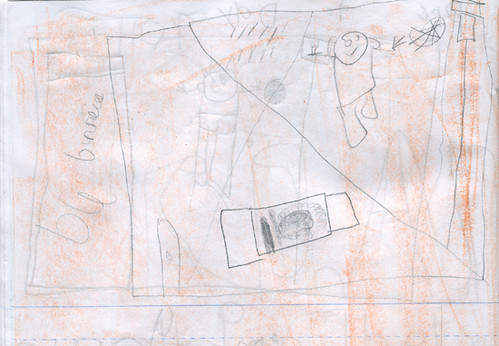 Next is another drawing of K. playing basketball, although it might be somewhere other than his room, because the rectangular bed is missing. Underneath, the text reads: "I im goe to a figh The ciy ciek." I'm having trouble translating this. My best guess is "I am going to a fight. The city (UNKNOWN)." Something makes me think this is wrong, but I've read it aloud several times and can't figure out what K. was trying to spell. 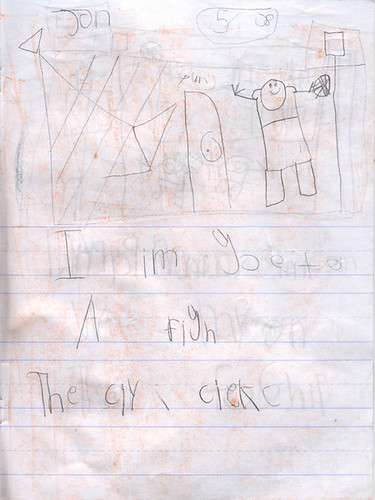 The following page actually has somebody playing basketball with K. for a change. It still seems to be in his room, though, because there is the characteristic rectangular shape of his bed. It reads: "in im Papiy." I'm not sure if this means "And I'm happy," since he usually spells that "hapey." The people in the drawing, though, certainly seem "hapey." 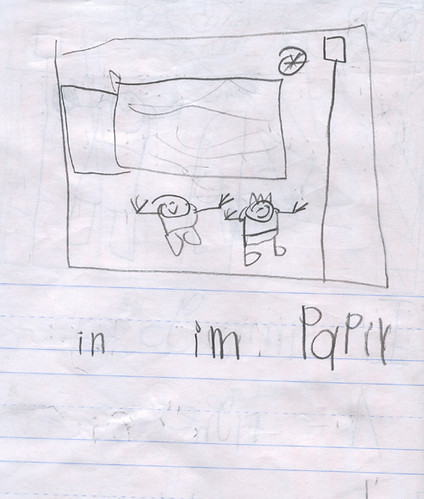 Yet another picture of K. in his bedroom graces the next page, although the text at the top is so well-written it appears to have been copied from something: "Just me and my little brother." Maybe it's the name of a book? It's interesting that there is no little brother in the picture, just K. by himself again. Underneath, it reads: "My Mom is com wit my on the foghip." After sounding this out countless times, I have no idea what the last word is meant to be. The rest reads: "My mom is coming with me on the (UNKNOWN)." Whatever a foghip is, I'm sure he expects to have fun. 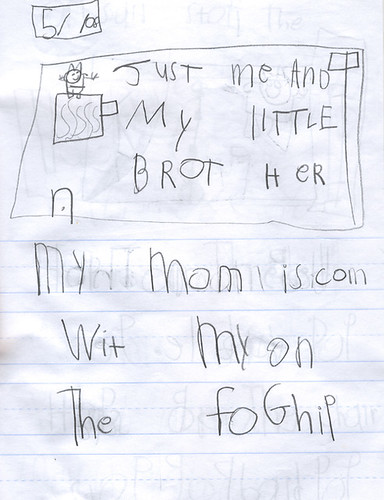 The final two pages in today's entry go together. The first has a picture of a deliriously happy K., on some sort of rectangular surface (his bed again?). The text reads: "Hop on the table. Stop said Pop." I believe this is copied right out of his favorite Dr. Seuss book, Hop on Pop, which he also quoted in an earlier entry. 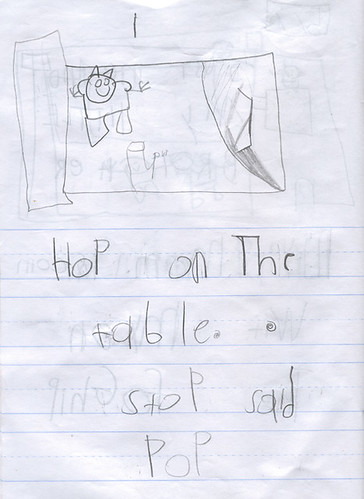 The final page for today is clearly a continuation. An abstract drawing graces the top of the page. Above it, the text reads: "On said stop the," and below it the text reads, "Hop on the bed. Stop said Pop. Hop on the chair. Stop said Pop." Again, he is clearly copying from his favorite book, which might be the only one he can currently read easily, given his limited language abilities. 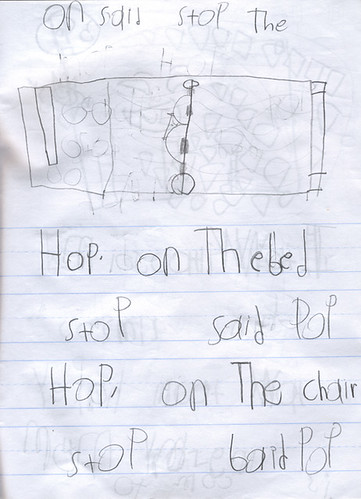 Next time, we conclude the exciting story and answer the burning question: "Will K. ever draw himself doing anything other than playing basketball?"

Moral:
Easy-to-read books are great for learning to write.