Lately, I've come face to face with how rapidly technology is changing. Or maybe just how old-school I truly am.

When I was a kid, my parents had held onto a few childhood 78s, which seemed terribly quaint at the time. After all, the modern standard was 45s and 33s. But still, it was the same technology, just played at a different speed.

Such a change over the course of 30 years was minor compared to today's rapid upgrades. 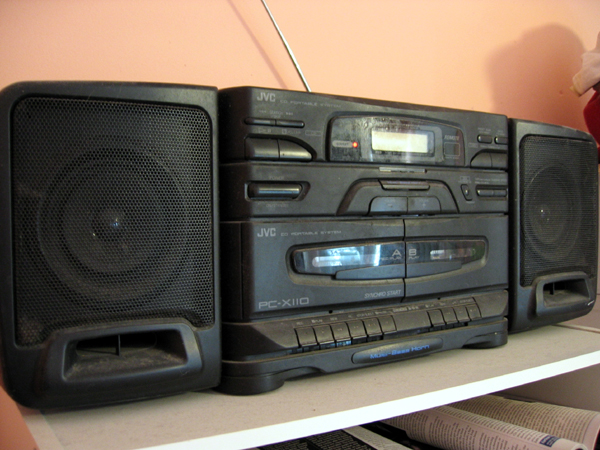 This week, I was trying to copy some CDs to play them in the car, since for some reason, my car's CD player refuses to play my B-52s double album, Nude on the Moon. I suspect the matte labels, which might confuse the sensors ("Must have shiny!" I imagine the CD player says). I also thought it was a good idea to back up The Gryphon's Serial Experiments Lain soundtrack, which is signed by three members of the band, Boa, who appear on the album and were guests at Otakon several years ago. I didn't want to risk my car CD player eating such a rarity ("Yum! Signatures!" I can almost hear it saying.).

Using iTunes, I made copies, and checked them on the computer. But when I tried to play them on my CD player, I got nothing. At first, I thought there was something wrong with the CDs, but then The Gryphon told me that older CD players can have trouble dealing with burned CDs. Sure enough, I tried the burned copies in the car, and they worked fine. This only served to remind me how old my CD player is.

My CD player dates back to the last millennium, and as a relic of the past, it contains dual cassette decks. Back in the day, I used to use them to make mix tapes. (Nowadays, of course, it's mix CDs or just iTunes playlists.) They were cutting-edge technology at the time, because you could record at high speed. Gives me goosebumps, thinking about it.

Then I was looking through my poetry, putting a submission together for Hanging Loose, and I thought of a particular poem for which I couldn't find a hard copy. So I looked through my old floppy disks, checking all the disks marked "poetry." (Brilliant filing system, eh?) When I finally found it, the poem was on a Mac disk, so my PC couldn't read it.

Again, this goes back quite a ways, when you consider that I haven't owned or used a Mac regularly since I bought my first PC in 1999. Oh, how fondly I remember those halcyon days of Mac usage, especially retrieving jammed discs through deft use of a bent paper clip. (For those who, blissfully, have no idea what I'm talking about, read this brief how-to on retrieving stuck discs from a Mac.)

I don't actively use floppy discs anymore, either, but I've kept them all neatly filed. I had always been in the habit of creating back-ups of my floppy disks, which was a good thing, because I was surprised how many were no longer readable. I guess it's a pretty poor long-term storage medium, and I'm going to have to transfer all those files to CD soon.

As it turns out, my search was a fruitless exercise in more than one way. I'd already published the poem in question in my first poetry book, Picturebook of the Martyrs, so it wasn't eligible for submission after all. I later found hard copy of it elsewhere, because I do tend to print all my poems out, especially when it comes time to revise them. Paper might yellow, tear and eventually crumble, but at least it doesn't get rendered obsolete by upgrades.

The greatest instance of obsolescence bopping me on the nose was when I tried to print out a personal essay I was considering reworking and submitting to Hanging Loose. The printer gave me a really strange error message I'd never seen before. The error message said to turn the printer off and then on again, but I did this several times with no results. (I mean, seriously, does that ever work?)

I brought in The Gryphon, my resident IT expert, and after fiddling with it for half an hour, he recommended I replace the printer. He said it was having severe issues that would require repairs, which was pointless when a new, better printer would cost $100 or less.

I'd been wanting a new printer for a while, because the print quality has been declining. When I sent out a press release earlier this year about my book, My Wedding, My Way: Real Women, Real Weddings, Real Budgets, I had to print them out several times to get copies that were good enough to send. Of course, if I'd wanted it to look like I'd yanked impatiently on the paper while they were printing, and then wiped my nose on the wet ink, I suppose I could have sent the first versions.

Helpful, sweet husband that he is, The Gryphon did some research into the printers sold at local stores and looked at customer reviews. He recommended the HP Deskjet 6940, which I purchased yesterday morning while I was out to pick up prescription cat food for our kitty, Luke. Ironically, his annual checkup was this morning, but his food ran out yesterday! He has been requesting an upgrade on his food, but due to his allergies, he's fresh out of luck. ("Yum! Chemical-smelling pellets," he thinks when I feed him.)

I was so busy in the afternoon with walking Una, writing up my daily Musing, and cooking dinner that I didn't get a chance to install the printer. The Gryphon pulled out a cable for me, and he assured me I should be able to handle it on my own. After all, this will be the third printer I've installed for a personal computer.

When I was thinking about it, I couldn't remember how long I'd had my Canon i550 Inkjet, only that it was at least one computer ago. So that takes it back at least seven years, which in technological terms, is an Ice Age. In fact, I almost think I can remember chipping it out of an ice block.

Recently, I also replaced two albums I'd previously loved to play on cassette, The Cranberries album, Everybody Else is Doing it, Why Can't We?, and R.E.M.'s Document. I finally faced the fact that I never pull out the cassettes I have neatly filed in several cassette cases in my closet. If I really want to listen to that music, I have to finally buy the CDs. Time to add them to my Amazon.com wish list.

No doubt, many more changes will come along, rendering this very entry obsolete in the not-so-distant future. Bookmark this page and read it again, in two or three years, so that you can laugh at the amusingly archaic references. Then you can message someone on your all-weather, UV-absorbing iGoggles (soon to replace the Bluetooth as the must-have annoyingly omnipresent accessory): "OMG, she uses iTunes instead of having her music directly downloaded to her brain. She's sooooo 2008!"

Moral:
Five years is forever when it comes to electronics.