Time now for the thrilling conclusion of the story of K., a boy of indeterminate age, who had written and drawn about his life in a book called "My Very Own Drawing & Story Book 1."

I found that book recently while walking the dog. The boy is just beginning to read and write, often sounding out things phonetically, and he writes and draws often about his favorite things: his family and playing basketball.

Page 31 is a bit of a departure, to say the least. In it, a very small K. is next to a huge, smiling snakelike creature. Is it possible he finally got to visit the zoo? The text reads: "I Wil soims Gharn in im hapey in my mom is com to." The best I can manage for a translation is: "I will (UNKNOWN) and I'm happy. And my Mom is coming, too." Looks like he's finally getting out of the house, even if it is to see a huge snakelike creature. 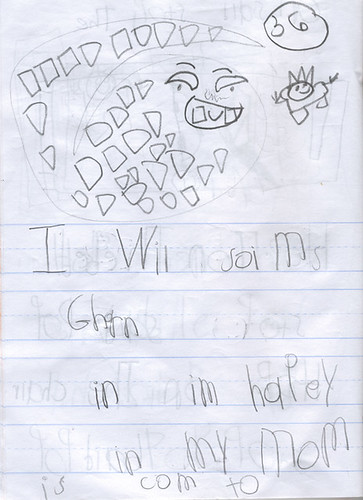 The next page appears to be a drawing of the building where he was living, in front of which I found this book. The book had spilled out of a bag of items discarded when the family moved. The text reads: "I cat wat'l cosmis in cat wat 4 roze." I'm not sure what "cosmis" is, but the rest of it, I believe, reads: "I can't wait till (UNKNOWN) and can't wait for Rose (?)." I wish I knew what "cosmis" is. I don't think it's Christmas, since the dated entries in this book are from May. Maybe it has something to do with his family's plans to move. 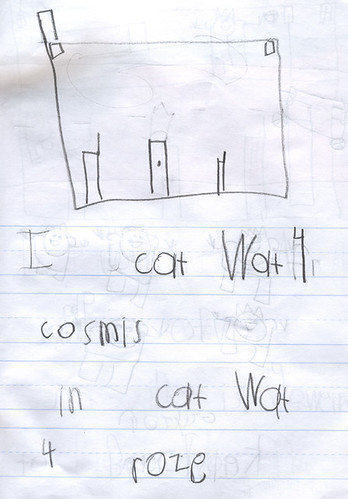 On the following page K. draws his entire family for the first time. Since K. usually draws himself with pointy hair, I'm guessing that he's on the far left at the top, and his little brother is underneath him. Next to him is a curly-haired person, next to a smaller curly-haired person. I'm guessing these are his mom and sister, which would make the person with no hair his father. They are standing next to a road, where there's a car. Perhaps they're getting ready to drive away together. K. wrote his full name at the bottom, but I've blurred it out. 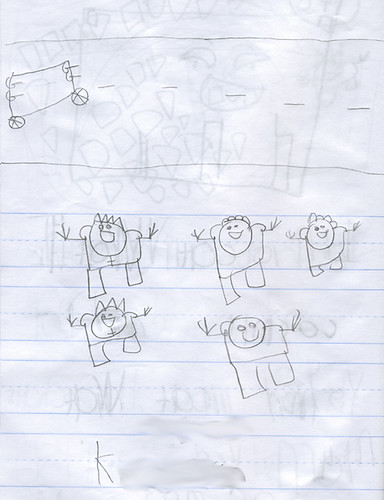 The next picture seems to show, for the first time, the location of K.'s bedroom, on the second floor of the building where he and his family lived, above a shop. You can see him, with the pointy hair, playing indoor basketball next to his bed. A curly-haired person, who is smaller than him and therefore probably his sister, is downstairs in a room that also seems to contain a bed (far right), so it's probably her bedroom. The text reads: "I gowein to a saPiP ofvr in id is gowein to Be fon." It seems like he's figured out that "going" is two syllables, although he's still striving to spell it correctly. My best translation is: "I'm going to a sleep (?) over and it is going to be fun." That seems a bit off, though, because I'm not sure how he could get "sapip" out of "sleep." 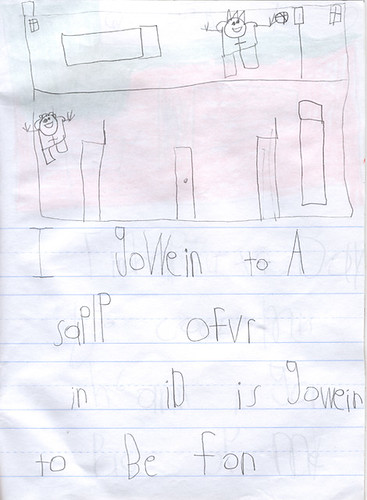 The final interior page shows K. in his room, though vividly colored with red and green. The drawing is dated 6/3/08, which is not long before I found this book. The text reads: "I im hapey to Day Be coez Mis hgarin is gon pac op me." My translation: "I am happy today because Miss (PROPER NAME: Hagarin?) is going (to) pack up me." I believe that he was looking forward to a neighbor or friend helping to pack his things for the move to a new home. 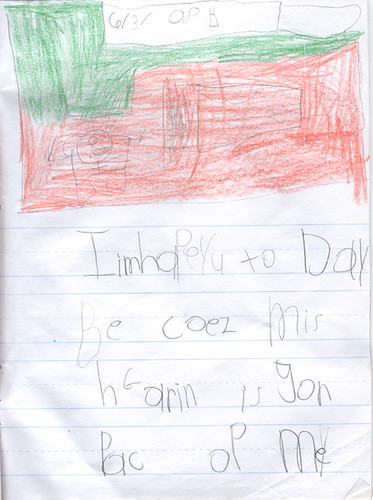 On the back page, K. has written his name a couple times (again, I've blurred it out), and he's practiced numbers. He's also apparently been playing with rhyming words, possibly thinking of his favorite book, the Dr. Seuss classic Hop on Pop. Some of the words are nonsense, while some are actual words. Clearly, this book is only the beginning of his exploration of language. 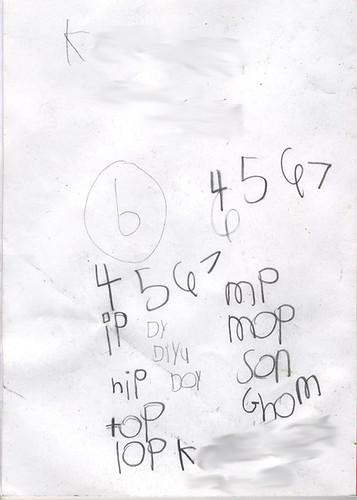 Why did this booklet end up in the trash? I'm guessing an adult tossed it while packing for the move, probably figuring that it wasn't worth taking along. Perhaps K. was already working on a new booklet, or perhaps he does oodles of drawings, making this book seem less special. Whatever the case, I hope that wherever he moved to, he is "hapey" and that he continues to draw and write about his life.