This has been an atypical Thanksgiving for our family. Since my mom is recovering from hip surgery, we made reservations a month ago to eat our meal in a local restaurant that had a Thanksgiving special. The reason was two-fold: we didn't want Mom to over-exert herself (and weren't certain she'd allow us to do everything for her) and we didn't know if she'd be able to manage the steps up to my Dad's apartment, which has become the default place for family gatherings.

Since my husband, The Gryphon, was not required to get up at the crack of dawn and start cooking the turkey (which has been his task for several years now), we waited until Thursday morning to set out on the roughly 4-hour trip. Staying at home the extra day also allowed Kung Fu Panda to participate in his preschool Thanksgiving program, for The Gryphon to work a full day and get more stuff done before the holiday, and for us to save a little extra money on pet sitting. 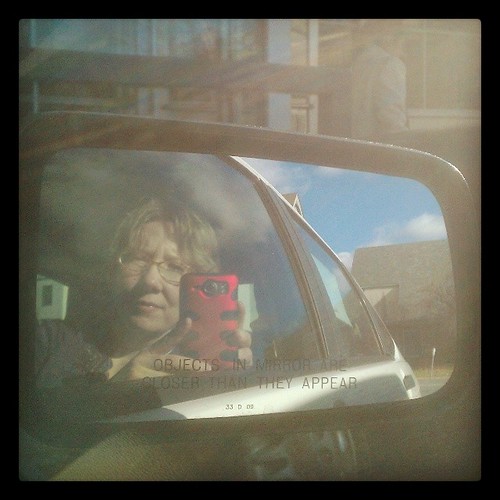 Getting closer to home all the time, I take a selfie in the passenger-side mirror

Our trip was fairly uneventful, despite more traffic than I'd expected. The Gryphon explained that many people drive short distances to spend the day with family, which of course made sense. Our conversation was a little limited during the drive, because I've got a cold which has turned into laryngitis and do better whispering than speaking right now.

The last leg of the journey was the most challenging, as KFP declared he was hungry but refused to eat any of the foods we provided to him. Instead, he kept demanding that we stop to eat in a "restanaut," repeating it over and over while crying. We finally managed to soothe him by playing tracks from Renee and Jeremy's "It's a Big World," also known as "the magic CD" in our household because of its calming effects. We had a big family sing-along, with me turned sideways in my seat to hold his little hand where he sat in his car seat. 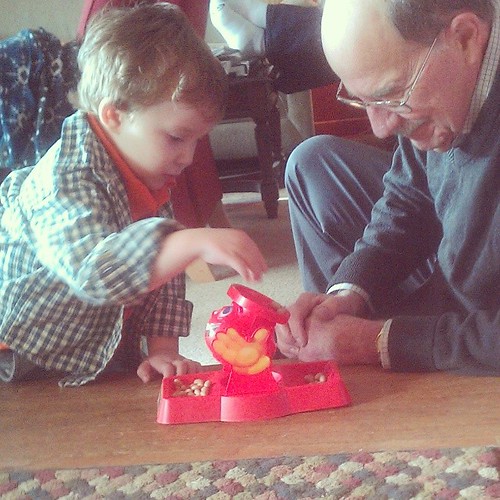 KFP and his Pappy play the game Spill the Beans

Fortunately, as soon as we got to his Pappy's house (my Dad), KFP calmed down. He cooperated with me about changing into an orange polo shirt and checked button-down shirt for the Thanksgiving dinner, and he cheerfully played one of his favorite games, Spill the Beans, with Dad. It's a very simple game where you take turns placing a plastic bean on top of a plastic pot until it tips over, spilling them all. Together, he and I have managed to get to 17, but he and Dad only reached a top limit of about 7, possibly because KFP kept bouncing around with joy at finally being with his Pappy. 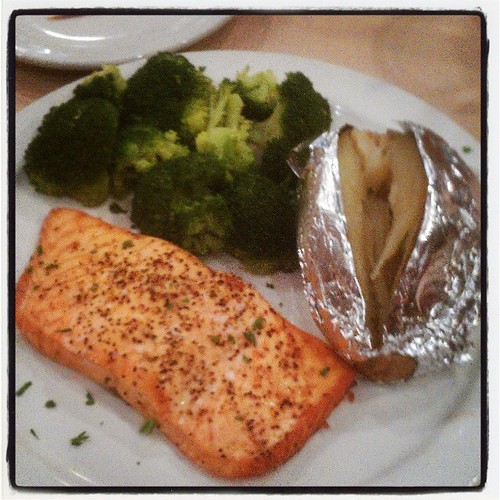 My gluten-free dinner of salmon, baked potato and steamed broccoli

The restaurant had a gluten-free menu, which I consulted before ordering salmon, a baked potato and steamed broccoli. It wasn't my ideal Thanksgiving meal, but their Thanksgiving special, unfortunately, included gravy and stuffing. I didn't bother to ask if there was any way to make it work, because I knew my mom was going to serve us turkey the next day (today). She got a free turkey from the grocery store and cooked it this last week, along with some of the traditional fixings, keeping in mind my current gluten-free and dairy-free restrictions. My Mommy loves me! 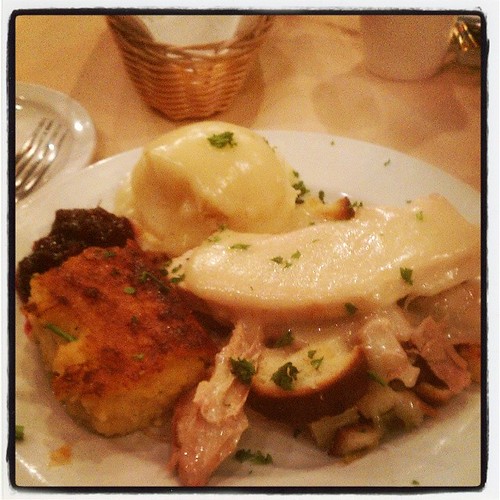 Although we ordered the kid's special for KFP, they served him as much as the adults. The only thing he touched was the bun and the glass of milk. Since he had a 24-hour stomach flu last weekend, he's been even pickier than usual. I think he's afraid of eating solid food. We keep reminding him he needs to eat to take care of his body, but unfortunately you can't make a 3-year-old eat if he refuses! 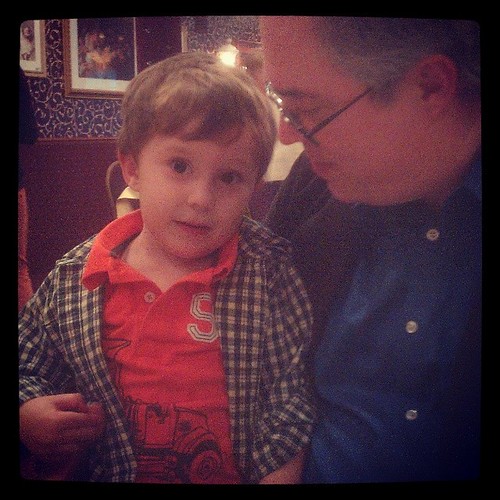 KFP sits on his daddy's lap after dinner at the restaurant

Because of the setting, the meal was also extremely drama-free. We weren't the only families eating there, although most of the patrons seemed to be individuals and couples. It was a nice solution to our situation this year, but I'm really looking forward to eating some turkey tonight! 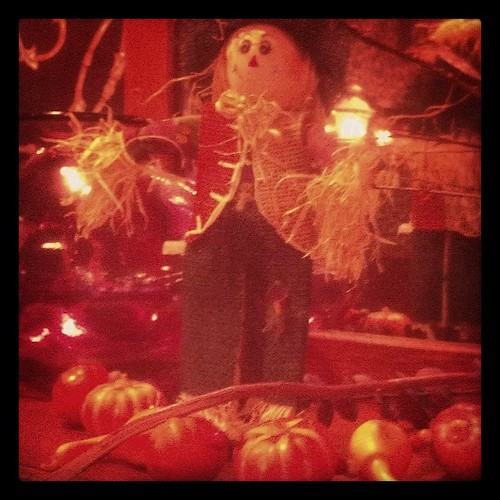 The decor at the restaurant, with little pumpkins and scarecrows, was very Thanksgiving appropriate