therealljidol community. This week's topic was "Jayus," meaning a joke so poorly told and so unfunny that one cannot help but laugh 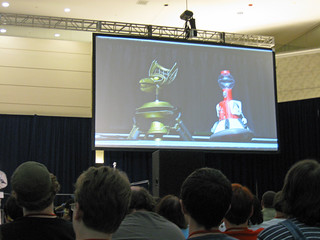 A large screen showing the MAT3K bots, lovingly made
by the Mad Hatter to resemble those
from "Mystery Science Theater 3000."

The lights dimmed, and the puppets popped up. The final "Mystery Anime Theater 3000" performance had begun. MAT3K's creator, The Cheshire Cat, had voluntarily retired the annual program about 7 years previously, pulling a "Seinfeld" and going out on top. For Otakon's 20th anniversary, he'd agreed to revive the show one last time.

Five months earlier, the Cheshire Cat, a fellow Penn State Monty Python Society alumnus, had rounded up the old gang, "Blues Brothers" style; except that instead of driving around the country in a beat-up former cop car, he'd included us all in a group e-mail. Eager to get back into the collective comedy game, I'd subjected myself to all the prospective films, voting for "Origin: Spirits of the Past" ("Gin-iro no kami no Agito") because it had the right blend of elements to make it riff-able, so to speak.

The perfect candidate for MAT3K treatment had to be bad, but also so bad it was funny. "Origin" filled that bill: an overly-ambitious movie set 300 years in the future, after a manmade environmental disaster had produced sentient forests. Yes, in this environmental screed, trees were the bad guys. More conflict came from the power-hungry leader of an industrial city, at odds with the simple agrarian village home of our dim-witted hero, Agito. Toss in a cryo-frozen love interest, Toola, and an irritating romantic rival, Minka, and you had comic gold.

As I'd written in an e-mail to the group, "Origin" was ripe for parody: "Anything that takes itself too seriously is a candidate, but this one is a would-be 'Avatar' meets teen romance. Ridiculous."

In a follow-up e-mail, I'd written, "'Origin' contains stock-looking characters which will allow plenty of anime in-jokes, and the action is over-reaching enough to lead to some great comments. There are plenty of pregnant pauses between the dialogue. And come on, it's produced by... Gonzo! My vote is for 'Origin.' How can you resist a movie with a line like, 'The forest is hot!'"

(Our eventual riff for that line: "The forest is moderately attractive at best. The forest should maybe get over itself.")

My eloquence had helped tip the scales towards "Origin," which had meant that riffing sessions had followed. My husband, The Gryphon, and I had attended one in April at the home of our friends, The Martial Artist and The Book Lover. While our 3-year-old Kung Fu Panda had played on the floor with our hosts' 7-year-old boy, we adults had engaged in truly juvenile behavior: watching a movie just to make fun of it. We'd then typed up our best lines for possible inclusion in the script.

After several such sessions with different groups of people -- and riffs e-mailed from long-distance friends who'd bravely endured the film alone -- The Cheshire Cat had sent out a combined script giving all the potential riff lines, along with their cues. He'd requested that we sift through them and e-mail him our preferred lines. I'd gone the extra mile and annotated my selections, giving my reasoning for why I'd chosen one line over another. Humor nerd that I am, I can bore you to death with reasons why something is funny.

From all these suggestions, The Cheshire Cat had cobbled together the final script, which had then been further revised after a couple run-throughs by our hapless victims actors.

Now, finally, it was show-time. With my son on my lap, we watched our friends make magic. The riffs, performed live, were even funnier than they'd been on the page. I was thrilled to hear some of my lines getting the biggest laughs.

Then, about halfway through the film, my son had a very human reaction to watching "Origin." He began screaming at the top of his lungs and demanded to be taken out of the theater.

In the hallway, I dropped to my knees beside my 3-year-old and begged, "Can we please go back in? Mommy helped write this show." With the split-screen consciousness of a writer, I inked that moment in my memory, knowing that one day, I'd end up writing about it.

For once, KFP was the one standing firm on bedtime. We had to return to our room and sleep, he told me. Fruitlessly, I suggested sleeping on my lap in the theater instead, but nothing could make him return to that theater, at least not while "Origin" was playing. Smart kid.

During the intermission, we snuck back in to reclaim our gear before returning to our hotel. As I pushed his stroller past people in phosphorescent wigs and yellow leather, I consoled myself by writing one last riff. I would repeat it to my friends for days: "Hey, at least I only had to sit through 'Origin' three and a half times."