therealljidol community. This week's topic was "In Another Castle." 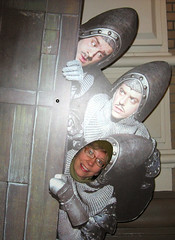 OPERATOR: (IN A NASAL VOICE) Welcome to "The Other Castle." Please select from the following options: 1 for Fantasy; 2 for Historical Fiction; 3 for Free Verse; 4 for Rhyming Verse and Lyrics; 5 for Personal Essays; 6 for Historical Essays; 7 for Humor; 8 for Meta; or 9 for Other.

OPERATOR: (SNORTING LAUGHTER) I hope you're happy with your selection. If you're not, just remember: We're the phone company. We don't care; we don't have to.

NEWBIE CHORUS (SPOKEN AS A SERIES OF OVERLAPPING VOICES: When I first heard the topic was "The Other Castle," I thought about Super Mario Brothers -- my favorite fairytale -- that saying "a man's home is his castle" -- this castle I saw in Scotland -- declaring a bye -- but I decided instead to take a risk and do something I've never done before: a Spenserian sonnet! -- flash fiction about my feet! -- a story from the point-of-view of the villain -- a monkey -- a piece of lint -- (IN UNISON) Here goes! I hope you like it!

SETTING: An empty stage, filled with dancing Players, all whirling around in circles, holding props. Every once in a while, one turns to face the audience and speaks, while the others continue to whirl. On the sidelines, a group of Readers sit in front of computers.

(SOUND EFFECT: The beeping sounds of a 1990s-era video game)

PLAYER 1: (HOLDING A VIDEO-GAME CONTROLLER) (SINGING) I smash and mash the buttons, / I dash and crash around. / I hope that no one guesses / The "twist" that I have found. / I'm not a video gamer / Who's hurling digital knives. / I'm God controlling humans / And playing with your lives!

CHORUS: (SINGING) Your skin breaks out in hives! Ha!

READER 1: (WEARING A T-SHIRT READING D.B. FIRST) (TYPING) Bunk and balderdash! If I wanted to read a drug-infused diatribe, I'd pick up "Go Ask Alice." This concept is so obvious it's like a dog wearing a hat to pretend he's human... and taking a dump on the living room carpet! (PUTS ON HIS HAT) That's my entry. And I'm outta here. Bye! (EXITS STAGE LEFT)

PLAYER 2: (HOLDING AND SHAKING A WHITE SHEET) (IN A GHOSTLY WHISPER) The woman in white flutters down the hall. She disappears through a dark door. Her shape raises goosebumps on my arm. I am certain I've seen her before, lived her life before. In another place, another time. She is the ghostly shade of my dimly remembered past.

READER 2: (TYPING WILDLY) I'm not sure I get it, but I love it! That is sooooo deep!

READER 1: (POKING HIS HEAD IN FROM STAGE LEFT) Why couldn't you have been first? I would have eviscerated that!

READER 2: (PUTS HER FINGERS IN HER EARS) La-la-la-la-la. No one's listening, DBF! Why don't you go collect more pop-cultural references that nobody will get?

PLAYER 3: (HOLDING A TINY FISH) (SINGING AND DANCING WHILST SLAPPING PLAYER 4 WITH THE TINY FISH) We're hacks of the round table. / We parody where we're able. / We steal a line / Wrap it in twine / And claim that it is cable. / We like that Sam-I-Am a lot. / And we eat green eggs and ham a lot! (TAP DANCES ON THE TABLE TO SILLY UPBEAT MUSIC)

PLAYER 4: (HITS PLAYER 3 WITH A GIANT FISH, KNOCKING HER OFF THE TABLE) First?

PLAYER 4: (TAKES THE COOKIE OFF THE PLATTER, STEPPING FORWARD ONTO A GIANT WHITE "X") Thank you!

(A GIANT CARDBOARD PROP OF A WEIGHT, READING "16 TONS" ON THE SIDE, FALLS FROM THE CEILING AND COVERS PLAYER 4)

PLAYER 5: Thank you, thank you! (BOWS AND EXITS STAGE RIGHT)

CHORUS: (QUICKLY, IN UNISON) The following entry contains triggers for nose picking, swing dancing, crowing like a rooster and adjective abuse. Warning: Spoilers for "Sherlock," "Dr. Who" and "Once Upon a Time"! Anyone still here, please click to read beneath the cut.

PLAYER 6: (WEARING A VIKING HELMET) (CLEARS THROAT) This is my only line.

READER 2: (TYPING) (IN A FLAT, EMOTIONLESS VOICE) LOL. That was hilarious. You are soooo funny. I am dying over here. (TURNS TO FACE AUDIENCE) (SHAKES HEAD AND ROLLS EYES)

PLAYER 7: (HOLDING A SWORD AND SHIELD) Thriangald, the last knight of Palomar, polished his sword. He knew he had to vanquish the evil tyrant Blidiotface in order to reclaim the kingdom for the fair princess, Embelir. As he strode forward across the marshy tundra, he recalled the first 17 years of his woe-befallen life.

PLAYER 7: (ACTING OUT THE ACTION BY PRETENDING TO BE FIRST THE HERO AND THEN THE VILLAIN) Thrusting forward with his sword, Thriangald parried the attack of the sinister Blidiotface. "You can never defeat me," Blidiotface snarled, spraying spit. "By the power of Dynhattor, I can and I will!" Thriangald bellowed as he buried his sword up to its hilt in the globular gut of the nasty Blidiotface. "I have avenged my mother, Tanghais, my father, Tontinad, and the hapless beggar Raesit!" Thriangald exclaimed, as tears poured down his face, raining onto the dust below. His hands still crimsoned, Thriangald rushed to the ox-cart to loose the bonds of Princess Embelir, whose golden tresses cascaded around her tear-stained face. Holding hands and skipping with delight, they entered the castle, once owned by another, and now their new home of wedded bliss.

READER 3: (TYPING WITH ONE HAND, BRANDISHING A WHIP IN THE OTHER) (LOOKING DIRECTLY AT THE AUDIENCE) This entry has now reached 1,027 words. Please wrap it up within 208 words. Thank you.

(SOUND EFFECT: Nature sounds of birds, a waterfall, and in the far distance, dolphins)

READER 8: (GAZING INTO A HANDHELD MIRROR) I am chasing crows for Farmer McCrall / chuffing across a flat landscape: / my daily routine of coffee, laundry, office work / "Oh, the indignity." / The crows won't get away from me this time. / The crows scratch and scuff, cackle and caw. / I bump them off, clickety-clack. / Clickety-clack. / Farmer McCall will be pleased. (SPEAKING DIRECTLY TO THE READERS) This entry was written while watching a "Thomas and Friends" episode as my preschooler kicked my leg.

READER 2: (DIRECTLY TO THE AUDIENCE) No kidding. (TYPING) What a creative approach to the topic. Three exclamation points. Smiley face.

PLAYER 9: (TO READER 3) Hey, chick with the whip, how many words are left?

PLAYER 9: Forty-two more than I need. Here goes: "Ten words cannot do justice to its walls. Two can."

THE COLONEL: (MARCHING ONSTAGE WAVING A RIDING CROP) Stop this! It's too silly! (ONE BY ONE HE PUSHES EVERYONE OFF THE STAGE)

halfshellvenus, who suggested I do something inspired by Spamalot. This Pythonesque creation was the result of that suggestion and my morning headache.

And in case all of this isn't silly enough, my 3-year-old son

kfp_rawr's Home Game entry is now up: "The Puffy Castle and the Pot Castle."