On Monday after Otakon, we slept in a little longer than we'd been able to the rest of the weekend. Then we made our way downstairs for a leisurely breakfast in the hotel restaurant. We both got the breakfast buffet, although I restrained myself. (I'd eaten a lot that weekend.)

As we were enjoying our second cup of coffee, after eating, our friends The Dormouse and The White Rabbit arrived. I was happy to see them, because I'd missed them at Dead Dog the previous night.

We let the waitress know we had two friends joining us, and we had our coffee topped off and hung out with them as they ate their breakfast. They told us a little about the things they'd seen over the course of the convention, the sorts of stories I'd been looking forward to hearing at Dead Dog. 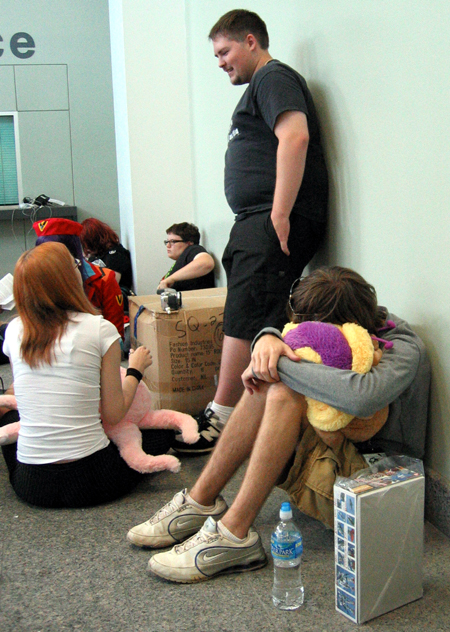 The most interesting experience The White Rabbit related was when a large guy fell asleep in the back of the video room where The White Rabbit was showing fan parodies (he's in charge of programming that track). He wouldn't wake up when the building was closing and everyone had to leave.

The White Rabbit tried to rouse the sleeping guy by himself to no avail, and he finally had to call on security people to help. According to him, the guy woke up in a very disoriented state, "As if he had never seen a building before." And they had to convince him that he had to leave, "and leaving meant moving towards the door until you were out of the building." The White Rabbit does have a talent for telling stories.

Next, The Dormouse regaled us with stories from the LARP (Live Action Role-Playing) game, which he runs along with The Cheshire Cat. Aside from a couple incidents, there wasn't too much real-life drama, but the in-game events were entertaining. Apparently, the bad guys banded together and took over the police station. The next time one of them pulled a robbery and the victim called the police, the baddies proclaimed, "We are the police." They did get their comeuppance eventually, which I believe involved explosives.

The major focus of the weekend's story was an even bigger, badder menace. Seems an evil nemesis planned to crash an orbiting colony onto the planet of Neo Baltimore, thus killing everyone. A massive computer named ALOS (pronounced "Alice") was aware of the problem and was trying to warn everybody, but her system had been sabotaged, so that she could send only fragmented messages through radio transmissions.

The players discovered both an obelisk and colored disks which could be hung on pegs protruding from the obelisk, which controlled ALOS. Different patterns would cause the computer to act in different ways, until eventually they hit upon the right combination to restore her intellect and allow her to help them. 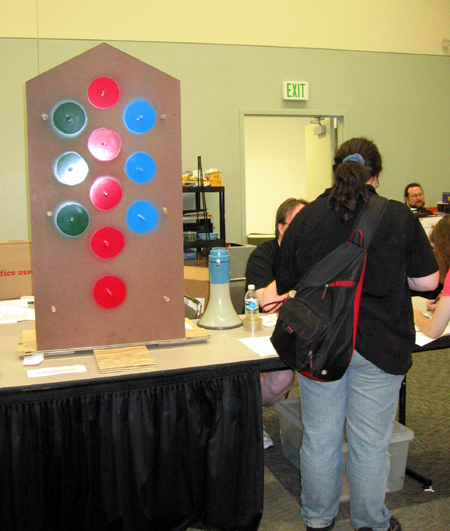 I don't remember exactly how The Dormouse said the players avoided their doom, but I think it involved firing the colony's engines to send it on a different course, which was achieved with just seconds to spare.

It sounds like The Dormouse had a really good time, and it was an entertaining time for all involved.

After we left the restaurant, we settled in chairs in the lobby, where we could swap more stories, including some we'd heard from others, and some of the drama that had happened this weekend. We were also waiting for The Pottermaniac, since she lives near The Gryphon and I, and we'd volunteered to give her a ride home. Soon, she arrived with just a small suitcase and a backpack, and I walked her out to the car to load her gear.

We all hung out in the lobby a while longer, swapping stories. As we were sitting there talking, The Gryphon got a call from Doc the Stampede, telling us that he had program books, signed by the guests, for The Gryphon and I. He wanted to know if he could give them to us now, rather than finding another way to get them to us. We said that was fine and invited everyone to walk along with us to Doc's hotel, which they were happy to do.

The weather had been remarkably moderate for this time of year in Baltimore, and Monday was no exception, with pleasantly warm, sunny skies. We met up with Doc in the Guest Suite, and as we arrived they were finishing their pack-up. The Pottermaniac and I both had some orange juice and grapes that they offered us. Doc gave us the program books, as well as a bag for Mistress Chimera, whom we'll see at the wrap-up meeting next weekend.

While we were there, we spoke with the people who were hanging out, and when several of them wanted to go get lunch, we all agreed to go along. Our group included me, The Gryphon, The White Rabbit, The Dormouse, The Pottermaniac, The News Producer, and a married couple, The Engineer and The Biologist, who are expecting their first child literally any minute.

We took our time walking towards the restaurant, Burke's. Even though we started out earlier, several other people beat us there, we would soon learn. When we arrived, we asked for a table and they told us it would be a while. Then The News Producers poked his head into the main room and saw it was filled with our friends, so he told the hostess that we were with them. They pushed a couple tables together for us, and we joined our fellow staffers for one last meal.

Burke's is a traditional restaurant for Otakon staff to gather, primarily because it's open for long hours and it's easy to seat large groups there. Another favorite restaurant, for similar reasons, is Uncle Lee's, a Chinese restaurant.

Everybody was tired but in good spirits as we wrapped up another convention weekend. We got a chance to talk to more people we hadn't seen. The Engineer, who along with his wife, The Biologist, runs the Photo Suite, told us that they did extremely well this year. They set a new record for photo sales, he said. They've been trying out new technology, as well, and new ways of handling orders.

The Dormouse had several people hanging on his every word as he relayed some stories from LARP. Hopefully, he'll write down at least a little of what he remembers, because it was entertaining to hear.

The kicker to the meal was when the waitress brought out a cake and we all sang "Happy Birthday" to the head of the Loss Prevention Team. He was very surprised, since it wasn't his birthday. But his friends like to do this for him, the head of Exhibitions told me, because his real birthday is on September 11, a difficult time for Americans to celebrate. As he put it, "Every day is his birthday except his birthday."

As we finished our meals, people said their good-byes and drifted on home. We had a nice drive back, with The Pottermaniac and I engaged in conversation while The Gryphon drifted in and out of sleep. I was surprised he managed to stay awake as long as he did.

We dropped off The Pottermaniac, collected our doggie, Una, from the pet sitter, went out for dinner, and then did some serious relaxing.

Some final observations about Otakon 2008:

Moral:
The best part of Otakon is sharing our stories afterwards.