Now that I'm recovered from yesterday's migraine, I can write about Saturday, when Otakon held its wrap-up meeting. We traditionally a couple weeks after the convention, while things are still fresh in people's minds. We talk about how things went and how to improve in the future.

We usually hold the election meeting on a separate date, but due to scheduling difficulties, we wrapped both of them into one. This meant that it turned into a real marathon of a meeting. 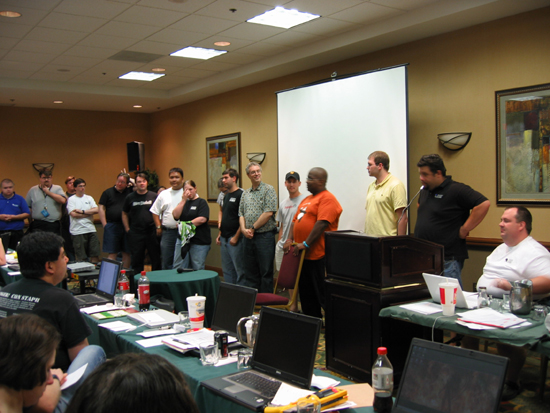 Candidates for the member-at-large position

The first part of the meeting actually got underway a little late because the board of directors' meeting ran over. The Gryphon and I took the opportunity to get ourselves a light lunch in the hotel restaurant, during which a number of friends walked over to chat, including The Cousin and her husband, The Photographer, and Pimp Daddy. The Cousin was carrying the infant daughter of The Laughing Man and The Scrapbooker, with their son following along, cheerfully.

Because the meeting started late, the time that would have been allocated for a dinner break between the two meetings was reduced to a 15-minute break. I knew that I could not wait until 9 p.m. to eat dinner, considering that I was already feeling pretty wretched. I had indigestion again, just like I had at the panic meeting before the convention, and I was miserable and cranky for much of the day.

The Gryphon and I got a list of local restaurants from the front desk and asked who would have takeout. We selected Ruby Tuesday, which was close, and drove down to order something. I had a little trouble trying to find something on their menu that I thought would be healthy, because almost everything was served in some sort of butter sauce or creamy Parmesan sauce. I found one item I thought might be better: the Creole Catch, which was fish with broccoli and cheesy rice. When I looked it up later, the whole meal was about 500 calories, which isn't bad for that sort of restaurant. It was actually pretty tasty, too.

We ate our meals back in the meeting room as the election meeting got underway. There were actually more positions in contention than there have been in some recent years, where we've only had one person running for most offices. That's nice to see, because it means there's a potential for the growth and continuity of the organization.

Of course, having more than one person running for a position meant that we had to listen to each of the candidates and then have a group discussion before voting, but in time we selected all of our officers. Some big section head positions still need to be filled, however. I guess we'll get to that as we go.

When it came time to choose the members at large for the board of directors, there were plenty of candidates, as evidenced from the picture at the top of this page. Among them, my husband, The Gryphon, who was one of those elected. He had stepped back a little bit for the last year or so but is now willing to do more, as am I.

We really didn't expect the meeting to go as late as it did. When it ended, we had to discuss whether we'd follow through on our plan to drop by my friend, The Poet's, housewarming party. He and his girlfriend moved into a new place earlier this year and were having a party to welcome people to their new digs. I had promised him we'd stop by. The party was supposed to start at 5. Usually, Otakon meetings run until about 5, and if we got dinner afterwards with friends, I figured we'd arrive around 8 or 9. I hadn't given him a time when we'd show up, though, just mentioning that we'd try to stop by.

However, we didn't actually leave the hotel parking lot until after 10. I still wanted to stop by. The Gryphon cautioned that we shouldn't stay long, because we did have a long ride home on top of that.

We had directions from Mapquest, but unfortunately, those directions were kind of confusing, so we missed a turn. We tried to find our way around but finally admitted that we couldn't and had to retrace our steps, only to discover that the poorly marked road that we'd been wondering about would have been the right place to turn.

Eventually, though, we did find it and even lucked out into a spot right in front. The neighborhood is a little bit of a step up from where he was living before, where the houses looked nice on the outside but were sadly in need of maintenance. His bathroom had not been well-kept by the landlord, to the point that I actually thought we would fall through the floor! The new place had no such problems. It was a spacious rowhouse, about two times as big as the space The Gryphon and I share. You could probably fit our bathroom at least twice or perhaps three times inside theirs, which has a reassuringly solid floor.

When we arrived, we weren't even sure if the party was still going, because at first it seemed quiet. A sign on the door said to knock and, if no one responded, to just come in. So we opened it and found several people in the kitchen area. More were out back, talking on the back porch.

The party had been going for hours, and The Poet was, let's just say, feeling no pain. He greeted us effusively, surprised to see us there. We didn't get to have much of a conversation with him before he got dragged into the living room to play some music, but his girlfriend told us all about the place and gave us updates on her career while I noshed on the vegetables and dip.

We also met their very enthusiastic dogs, whom they found wandering the neighborhood together. They were a little excited for the party, but they were very sweet. The Poet's Girlfriend gave them treats to reward good behavior. 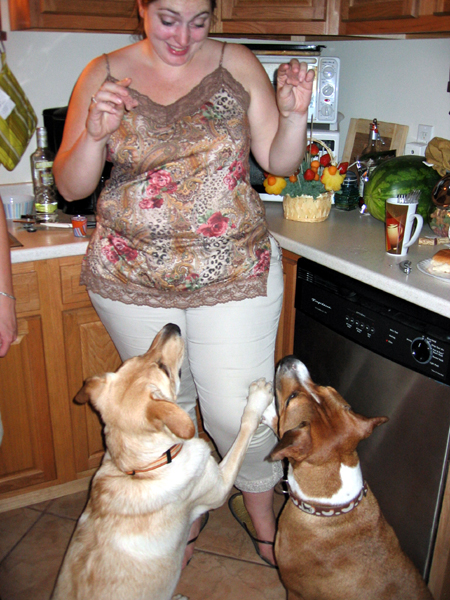 A few people settled down to play guitar in the front room. I never really did get properly introduced to them. They played mostly originals, although the woman managed to get through most of "Ripple" by the Grateful Dead. We tried to sing along, but most of us didn't know all the lyrics. She also sang a great original protest song called "Ice Cream," which had terrorists, the Patriot Act and, well, ice cream. 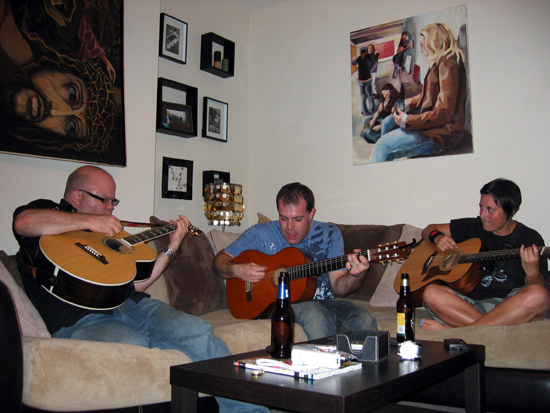 The Poet (in the center in the above picture) joined in for a little bit, although he kept getting distracted and running into the other room to talk to people.

We probably would have left after listening to a couple more songs, but then much to my surprise, The Artist and her husband arrived. So we stayed a little longer, just to talk to them.

I also got to meet another artist while I was there, who told me that she hosts poetry readings in her gallery at the end of every month. She gave me a card. I told her I'd try to get down there sometime. It's a good idea to get back into the habit of reading my poetry when I can.

I probably would have stayed later if we didn't have two and a half hours of driving ahead of us. But about midnight, we said our good-byes. The first thing we did, of course, was get some coffee at a Starbucks at the first rest area on I-95. I was so interested in talking about the day's events with The Gryphon that I had no trouble staying alert for the drive home.

Fortunately, we had planned ahead and arranged to leave Una overnight with the older couple who serves as her pet sitter, because I don't think they would have appreciated being awoken at 2:30 a.m.!

Moral:
Two meetings takes twice as long as one.