In honor of my birthday today, I'll share some items I've found while walking my dog. I think you'll notice an appropriate theme.

The first is written in pencil on a piece of notebook paper. It says, "Happy Birthday! have a great B-day Miss 13. Your friend, Neisha." The note sender has decorated the note with five helium balloons and a flower. Looks like a friendly note, passed during the halls of school. 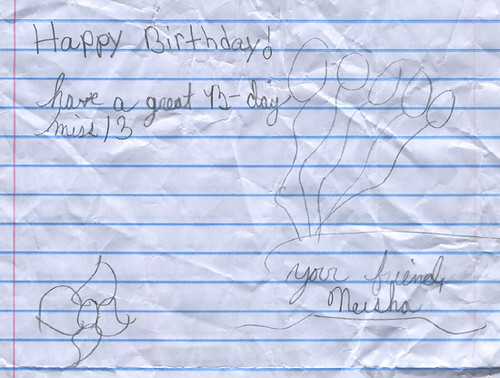 Next up is another handwritten note. It had been folded into four quarters, with the word "Yay" written in block letters on the front, surrounded by two stars, two stars of David and, mysteriously, the word "macaroni." 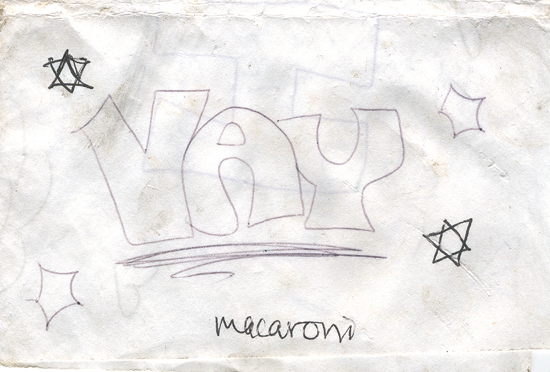 Inside, it reads, in block letters, "HAPPY BIRTHDAY CHRIS!" On the side, other messages are written: "I love you Daddy! Sweet 16! Aww". It's signed by "Fotoula, Erica & Christine." There are several hearts, as well as a large rose drawn on the note. While this seems like a personal note written to a boyfriend, it's signed by three girls, which leads to plenty of questions. A high-school Casanova, or simply the male friend of several girls? 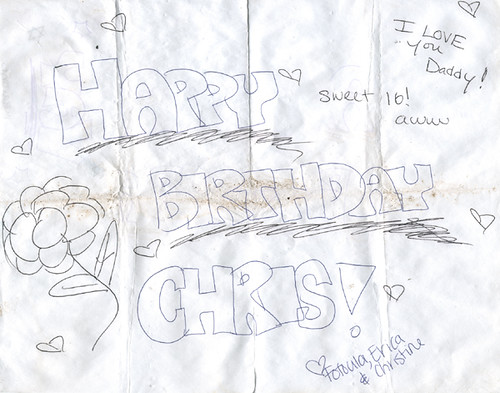 Another birthday greeting is half of a store-bought birthday card. The part that remains is the inside, green cardstock with the simple message, "I love you / Happy Birthday" and signed "Michelle." This find fascinates me. Did the receiver rip the card apart and throw it away, disdainfully? Or perhaps the receiver tore it apart in order to keep the picture on the front (perhaps not wanting others to see the message inside)? Did Michelle chicken out and tear the card up before delivering it? Who knows? 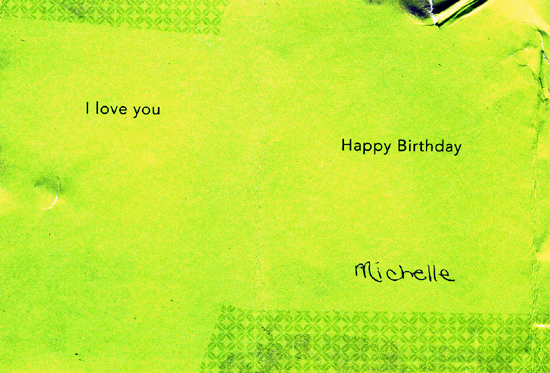 The last birthday greeting is the most intriguing. It's a store-bought card with a garden-based graphic theme on the front, consisting of gardening tools, a watering can, a wheelbarrow and leaves. It says, "Have a Really Nice Birthday Dear Friend." The inside of the card will reveal just how dear of a friend the sender hopes to become. 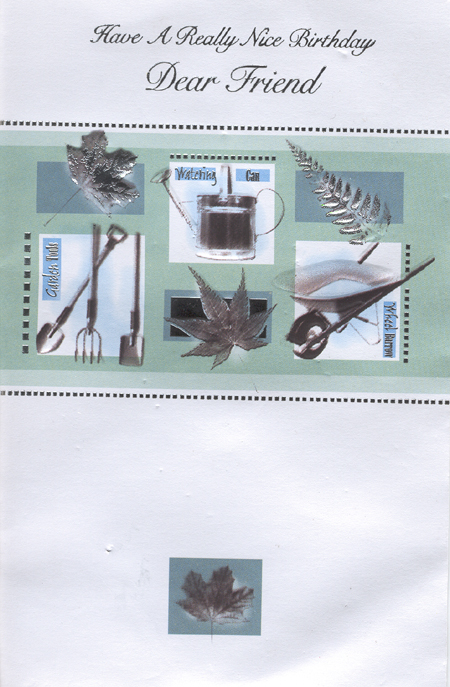 Inside, the preprinted part of the card reads, "Thinking special thoughts of you on your birthday and always. Happy Birthday." The sender, a female, has added, "Kisses & Huggs" and also the recipient's name, "B.", and her own, "From D." For some reason she's put the names in quotation marks. Perhaps they are pseudonyms? Hmm. "Kisses & huggs" to a dear friend? I suppose that's OK... 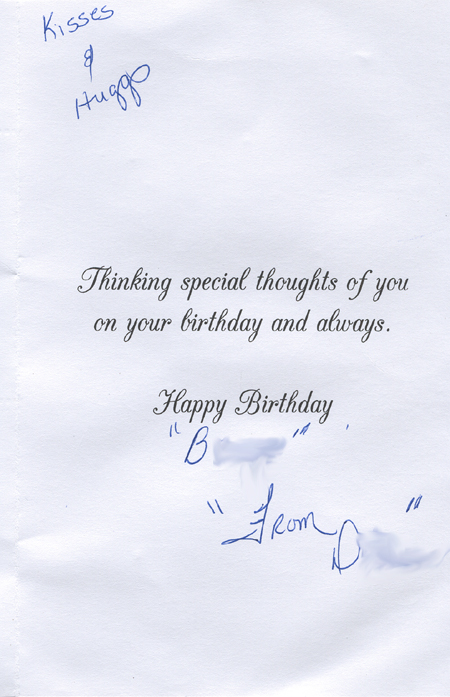 Just in case her message wasn't clear enough, D. included a handwritten note, which reads, "To B: I've been thinking about kissing your lips, having sex with you. I believe in the saying good things come to those who wait. And both of us are waiting and still trying to be together. You NEED to MAKE it happen From D. Someone who is very interested! I am really looking forward to having sex with you! Among other things." Um... other things? Like, friend things? 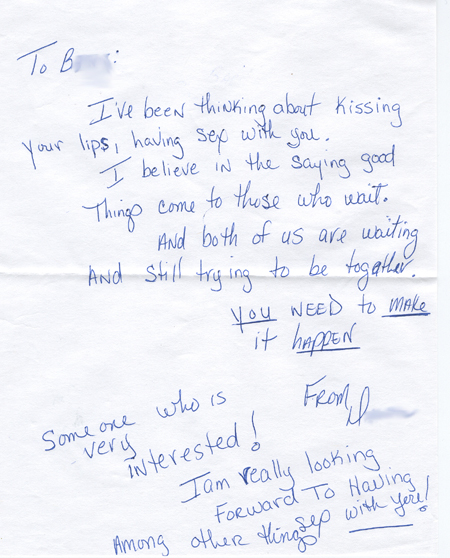 Well, if it's going to be that kind of party... Anyway, I'm not certain if this is a note between two teenagers still living at home and trying to find private time together or whether it's a note from a woman to a married man who's been promising to get a divorce. At any rate, I think D. has made it pretty clear what kind of friend she wants. Again, the question arises: how did this end up on the street? Did B. read it and toss it away? Or did it slip out of D.'s pocket on her way to deliver it? If so, maybe that's for the best!

Finally, a couple party invitations. Even though I'm not throwing a party this year, there's something appealing about this first one. It reads "Party for the Princess" and features a big-eyed Bratz-style girl in a pink stole, walking six white poodles, on a psychedelic flowered background. Inside is the party information for a little girl's birthday party. I like it because it's got some of my favorite things: dogs, the color purple and flowers. 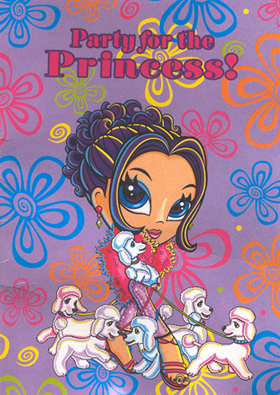 But if I were going to choose one, I'd send the second invite, even though it's designed for a boy. It features a Power Ranger on the front and reads, "You're invited..." Inside it says, "... to shift into party mode!" I would sooo send this. 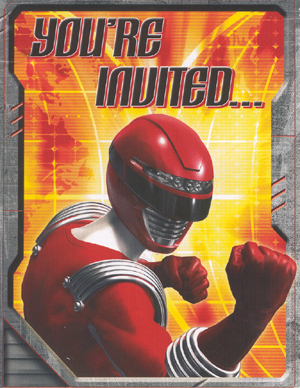 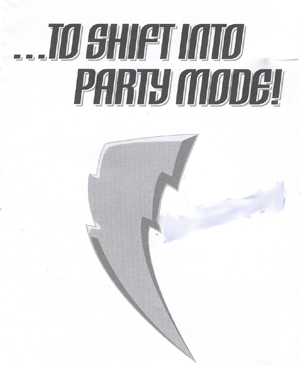 Despite the fact that I will be in work mode, not party mode, today I hope these finds brought as many smiles to you as this day brings to me!

Moral:
Only send a lovey-dovey birthday card if you're reasonably certain the recipient will like it.