This is my LJ Idol entry. This week's topic was "Fear is the heart of love."

If you haven't heard much from me for the past few days, it's because I've been too busy listening: reading hundreds of comments on a post I made to a private Facebook group that sprung up after the election. This group is primarily composed of Hillary supporters who needed a place where they could hear positive stories and share inspiration for healing. But even given that audience, I had no idea my post would get such a response, and that it would be so overwhelmingly positive. I was asking people to do something that felt radical at the time: to listen to the other side. Not to argue with them, but simply to listen. Here's what I wrote:

My job is transcribing cable news. Every weekday, whether I want to or not, I pay careful attention to two shows on CNN and one on FOX News. On days when I can't turn away from whatever ominous or tragic events dominate that day's news cycle, I'm grateful for the uplifting stories from [this group], which help remind me of how much good exists in the world.

With that in mind, I'd like to share some of what I've learned from transcribing the news. I say this as the daughter of a sexual abuse counselor, who spent 25 years listening to other people's concerns, regardless of their political persuasions, until passing away last November. I say this as someone with a family connection to James Wilson, signer of the Declaration of Independence and one of the first Supreme Court justices, who made himself unpopular after the American Revolution by serving as a defense lawyer for Americans who had been loyalists, insisting on protecting their rights under the law. I say this as the daughter of a lesbian who felt she needed to stay closeted in her small town her entire life, not living to see the day that her church was led by a gay pastor. I say this as the descendant of Quakers who spoke out against slavery and ran a stop on the Underground Railroad, but felt it was more important to persuade those who disagreed with them than to simply shout them down.

We need to listen.

Don't just listen to the stories posted here. Listen to your neighbors or relatives who voted for Trump. Let them talk and just listen quietly and nod, as if it was your job to transcribe every word accurately. You'll be surprised how much you learn about their core beliefs, their fears, and their hopes.

In my 15 years -- has it really been that long? -- of transcribing cable news from all points of view, I have learned that, while there are many issues that drive us apart, there are many others on which we all agree. If we find common ground on those areas, I hold onto hope that we can fix the toxic partisanship in our country and work towards healing this country.

It starts with listening. Trust me: I do it for a living.


When the moderators cleared the post, "likes" and comments started popping up immediately. I took a deep breath and read them, bracing myself for backlash. Instead, hundreds of people just wanted to thank me for giving them hope, for much-needed advice, for inspiration. A few people, who'd had painful interactions with others, remained aloof, declaring they refused to listen to anyone who could vote for Trump, whom they felt represented nothing but hate.

In most cases, I chose only to listen to those voices, as well. Other commenters, however, took up the cause and, in a prevailingly civil, gentle way, let those people know they, too, were being heard and urged them not to give up. I listened to those conversations, too, smiling at what I heard.


That week, one of my favorite shows, "black*ish," in the episode "Lemons" addressed the issue of our nation's post-election rhetoric. In the episode, Dre (Anthony Anderson) gives his work colleagues very similar advice after they have difficulty getting past divisive rhetoric.

A couple days later, in his farewell address, President Obama told the nation, "[D]emocracy does not require uniformity. Our founders quarreled and compromised, and expected us to do the same." He went on to say that "Regardless of the station we occupy; we have to try harder; to start with the premise that each of our fellow citizens loves this country just as much as we do; that they value hard work and family like we do; that their children are just as curious and hopeful and worthy of love as our own." Furthermore, he urged us not to give in to fear, to participate in our democracy and to keep speaking to each other:

"Ultimately, that's what our democracy demands. It needs you. Not just when there's an election, not just when your own narrow interest is at stake, but over the full span of a lifetime. If you're tired of arguing with strangers on the Internet, try to talk with one in real life."

I couldn't have said it better, and I can point to my own family history as an illustration of that point. On my father's side of the family, one line contained pacifist Quakers who had nevertheless felt compelled to fight for the Union in the Civil War; the other line consisted of Virginian land owners who had fought for the Confederacy. Within only three generations, through my Grandma and biological grandfather, their blood blended, and my father was born. Can you imagine if those families had held onto hate, been unable to talk to each other? My father wouldn't exist; nor would my brother, my sister, and I; nor our five children.

Nor will the dream of our Founding Fathers and Mothers, if we do not find a way to talk to each other. It starts with listening. 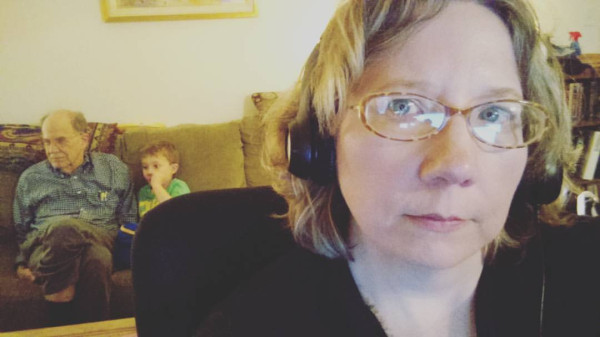 Me transcribing cable news on Thanksgiving night, with my Dad and KFP in the background.